Around the world, it’s estimated that one out of every five or six peopleis suffering from a mental health issue at any given moment. Although it’s unclear if people living in poverty are affected disproportionately by mental illness, impoverished communities almost always lack access to proper medical care, and lack of resources certainly intensifies the situation.

Angela Ofori-Atta is a clinical psychologist, professor and head of the Department of Psychiatry at the University of Ghana’s School of Medicine and Dentistry. Much of her work focuses on mental health research and interventions in rural Ghana and other areas communities that lack resources.

Last year, Heifer International invited Ofori-Atta to visit Kenya and look at Heifer’s work there in relation to its effect on mental health. While in Kenya, she observed that Heifer’s work overlaps with her work as a psychologist. “The similarity is that we teach basic cognitive behavioral concepts with people in communities, and we measure the impact of that on their mental health and their resilience.”

Ofori-Atta said that Heifer’s organizational values, the 12 Cornerstones, positively affected the mental health of project participants. The 12 Cornerstones help project members examine the attitudes, behaviors and skills that are important in their community and that will contribute to individual and collective success.

“It seemed to me that the Cornerstones, where they had been discussed and learned and there were champions within the community for the Cornerstones, there seemed to be more of a sense of empowerment amongst the group members. And I think that it meant they had a common language, and they could hold each other accountable. 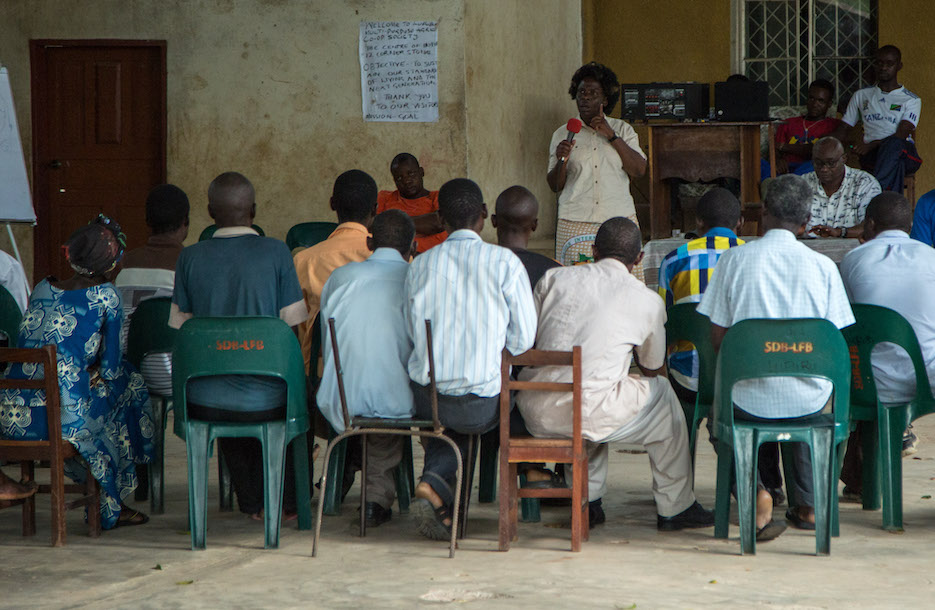 “One of the responses of one of the women groups was, ‘Oh, we would just get up and go and find out why they’re so depressed, and if it’s because they can’t pay back their loans, we would put some money together and pay it off because that’s what we’re supposed to according to Cornerstone number so and so.’”

Recently, Ofori-Atta took the time to share her thoughts on mental health and Heifer’s work.

Why did you want to get involved in mental health work?

My mother was Africa’s first woman pilot. And I was very proud of her. She had bouts of depression, and she had bouts of not believing in herself, and every now and again, she would go into a manic episode. It was actually a hypomanic episode, not quite a full-blown mania. But, I saw, and this was in the 60s and the 70s, we didn’t quite have the services for her in the country. So I think, for me, by the time I was going to university, I knew that this was something that interested me, and I decided to do psychology. I walked into [the] university library, and I found amazing books that seemed to answer my questions, so I just continued along those lines.

In rural areas, in communities where Heifer might work, what kind of mental health issues do you see that are particularly prevalent?

From the work I’ve done with Heifer in Kenya, people recognize the presence of depression. We would ask, “Are there people who are not happy?” And they would say, yes, but they would always relate it to a time before Heifer came, when they didn’t have resources and they didn’t have hope. And they couldn’t pay school fees or put food on the table. That was how they conceptualized it. When they thought about it, that’s how they came up with the understanding of mental health issues.

Interestingly, they didn’t describe psychoses or schizophrenia. They were bent on the more subtle forms, I think. Anxiety and depression are some of the things they came up with. Perhaps because a psychosis or schizophrenia is so clearly a debilitating thing, so obvious that they didn’t need to talk about that. So I think, like everywhere else in the world, depression and anxiety have to be the most common mental illnesses that we’re going to come across where Heifer works. And substance abuse.

I think [the Cornerstones] all give a little bit to the self-esteem, the confidence, being able to hold up your head. Angela Ofori-Atta, University of Ghana

What do you think it is about the Cornerstones that improved mental health in the communities that you visited?

I don’t know. I think we’re trying to put our minds to ask ourselves how we want to measure the impact. I think it would be difficult to just say which one of these Cornerstones are responsible. Because there are twelve of them, you know? And I think each of them contributes a facet of it. For example, Passing on the Gift is the one that stands out for everybody because you have to take care of the gift and then multiply it enough to pass it on. But it’s not just about Passing on the Gift, it’s about building confidence that you too are more than the receiver; you are also a donor. We could say there’s something to measure there in terms of the confidence and self-esteem in terms of the person who was a benefactor and is now a donor. And then, the accountability and the gender and family focus … I think they all give a little bit to the self-esteem, the confidence, being able to hold up your head. I don’t know, I think that’s the next step of our work, is to look at the impact, hypothesize what they give and go out and measure them. 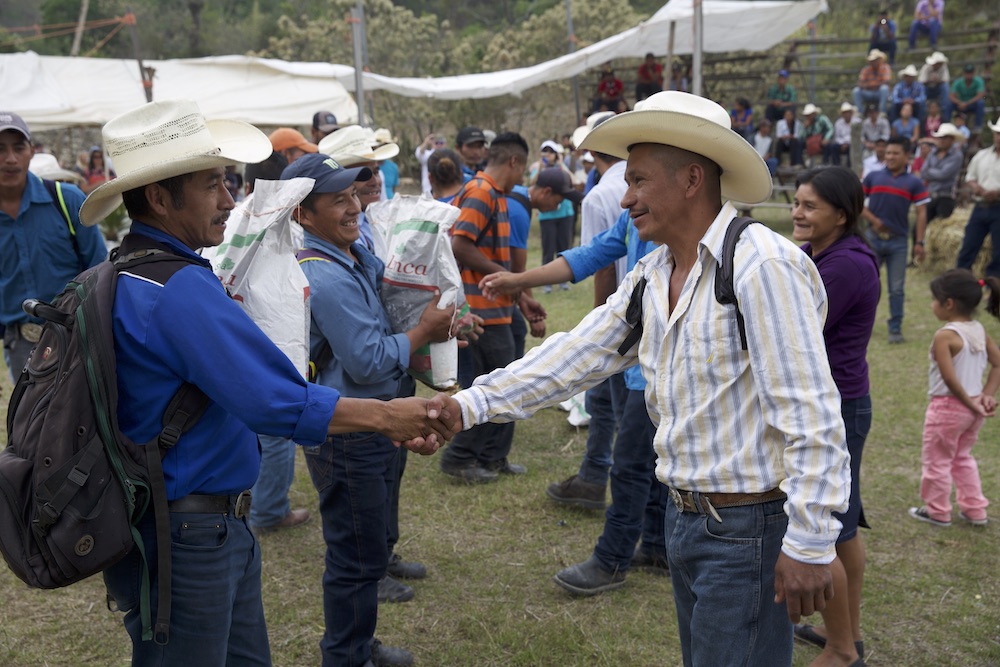 A Passing on the Gift ceremony in San Miguel de Colohete, Honduras. Photo by Chelsey Louzeiro.

Do you think rates of anxiety and depression or other mental illnesses are higher in communities suffering from poverty?

Poverty is a risk factor for mental illness all around the world. And we figured that people who are poor may not have buffers when it comes to difficulties, like the rain comes and wipes away your crops and there’s no insurance for it. Or you fall ill, and there’s no health insurance, so you can’t get the help you need. Or your child qualifies for school, and you can’t pay the fees. And that’s really stressful for everybody. There’s nothing to fall back on. I think that in that way, yes, there may be more chances or higher probability of being anxious or being depressed amongst the poor. I think the difference between poor communities and non-poor communities is the lack of buffers. So that’s why we set our mental health interventions to build resilience. To offer some kind of a buffer, an internal buffer for when things go bad.

What about instances of suicide? Is that higher in impoverished areas?

I’m not sure about that because I don’t think the data has been segmented. But [when] we have had waves of suicide, they weren’t limited to places of need.

The other aspect of being in poverty is sometimes there’s more social support there. Because they are more communal. So even though there are no personal buffers, there may be community buffers. “We’re all poor, but you’ve had this misfortune, so we’re here for you.” For example, in a death, all the families in the community would come together and say, this is what we contribute to the funeral. And then when the funeral is over, whatever monies are, presents are given during the funeral get shared back to the community for the support they gave. There are some community rituals or rites of passages like that, that buffer people in smaller communities, which you don’t get in richer communities. So I think it’s more complex a phenomenon than just being in the poor environment or being poor that predisposes you to suicide.

What are the next steps in regard to your work with Heifer? 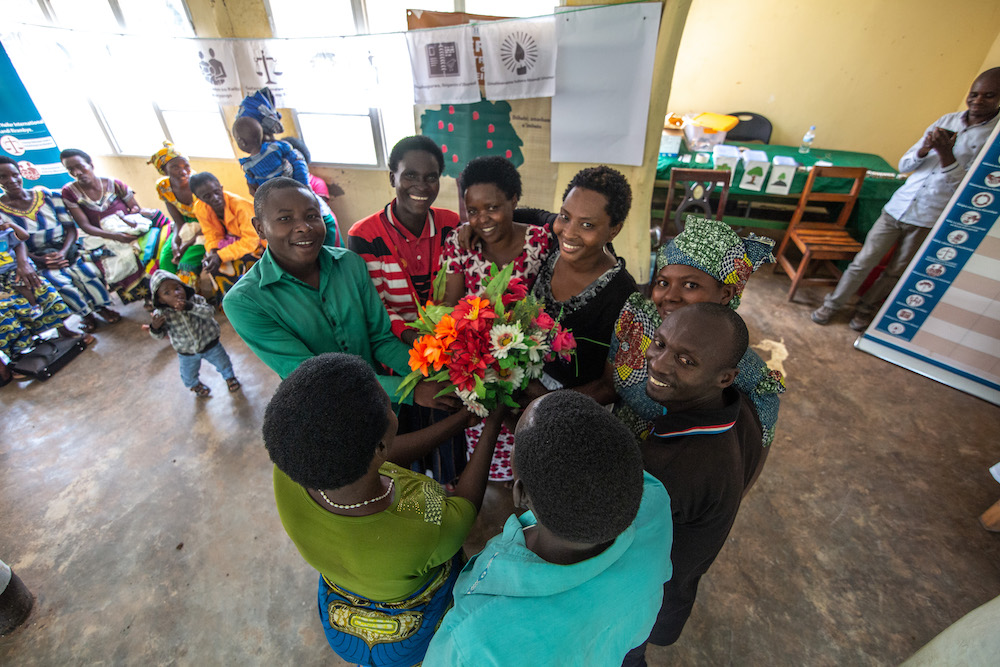 Members of the Giramata Karambi group in Rwanda participate in an exercise. Photo by Phillip Davis.

We want to go to Nepal because the program has been running there and the Cornerstones have been taken very seriously there for a long time. There’s been some data that’s been collected already in Nepal for the impact assessment or let’s say to see how the Heifer programs have worked or not worked in these communities. We want to look at the data set and see what story, what’s the picture there, before we’ve planned new studies. So that’s our next step, look at the big data, go back, play around with that, see what it’s telling us.

I can’t wait to begin that kind of work, taking [the Cornerstones] apart and seeing how they impact the communities.