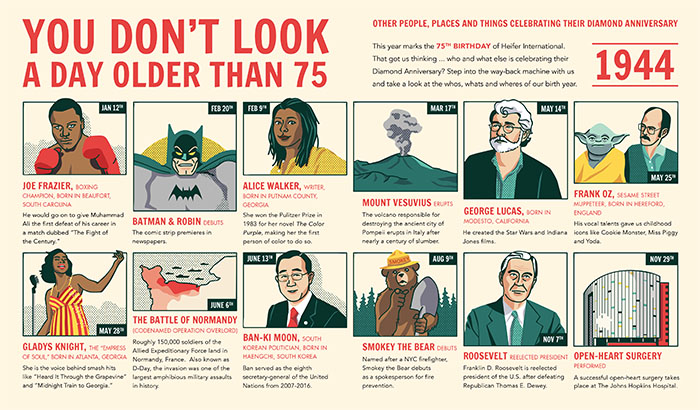 Download a gorgeous, abbreviated version of this timeline (as featured in World Ark Magazine) here.

This year marks the 75th Birthday of Heifer International. What a milestone! And that led us to wonder: who and what else is celebrating their Diamond Anniversary? What else was happening way back in 1944? The short answer is "World War II." But the long answer is laid bare in the timeline below. Take a look and learn about the whos, whats and whens of 1944.

Sunscreen
Did you know that the ancestor of the sunscreen we know today was first invented for the United States military? In 1944, pharmacist and airman Benjamin Green set out to create a tincture that would prevent soldiers in the Pacific tropics from roasting in the sun.  Setting up shop in his own kitchen, Green eventually concocted a thick, red, unpleasant serum called Red Vet Pet (short for red veterinary petroleum). The goo blocked the sun's harmful rays through sheer brawn; the mixture was sticky with a texture similar to that of Vaseline. Sales boomed when Coppertone bought the product and improved on the formula.

Kidney Dialysis
Dutch scientist Willem Kolff constructed the first artificial kidney from wooden drums, Cellophane tubing and laundry tubs. The crude dialysis machine drew blood from the patient and removed toxins that poorly functioning kidneys were unable to catch. The device then pumped the toxin-free blood back into the patient. With this machine Kolff prolonged the lives of his first 15 patients for a few days. Later iterations of the machine were more successful and have resulted in the kidney dialysis process we have today.

Clue
Originally called "Murder!", Clue was created by British composer and musician Anthony Pratt during the long, boring blackouts of WWII. Pratt was a private musician who spent a lot of his professional time playing the piano in European country mansions where murder-mystery parties were all the rage. As he played, he took mental notes and, in 1944, he decided to recreate those parlor games in miniature form. Pratt's wife Elva helped by designing the game board on their dining-room table.