Coffee is a ubiquitous pleasure for many people in the United States and abroad. But even though the end product is high-priced and high-selling, coffee farmers still struggle to make ends meet. Traditional development efforts can help support coffee farming families to an extent, but it’s hard to make lasting change while compensation for farmers is so low. It’s time to take a look at changing how the system works. 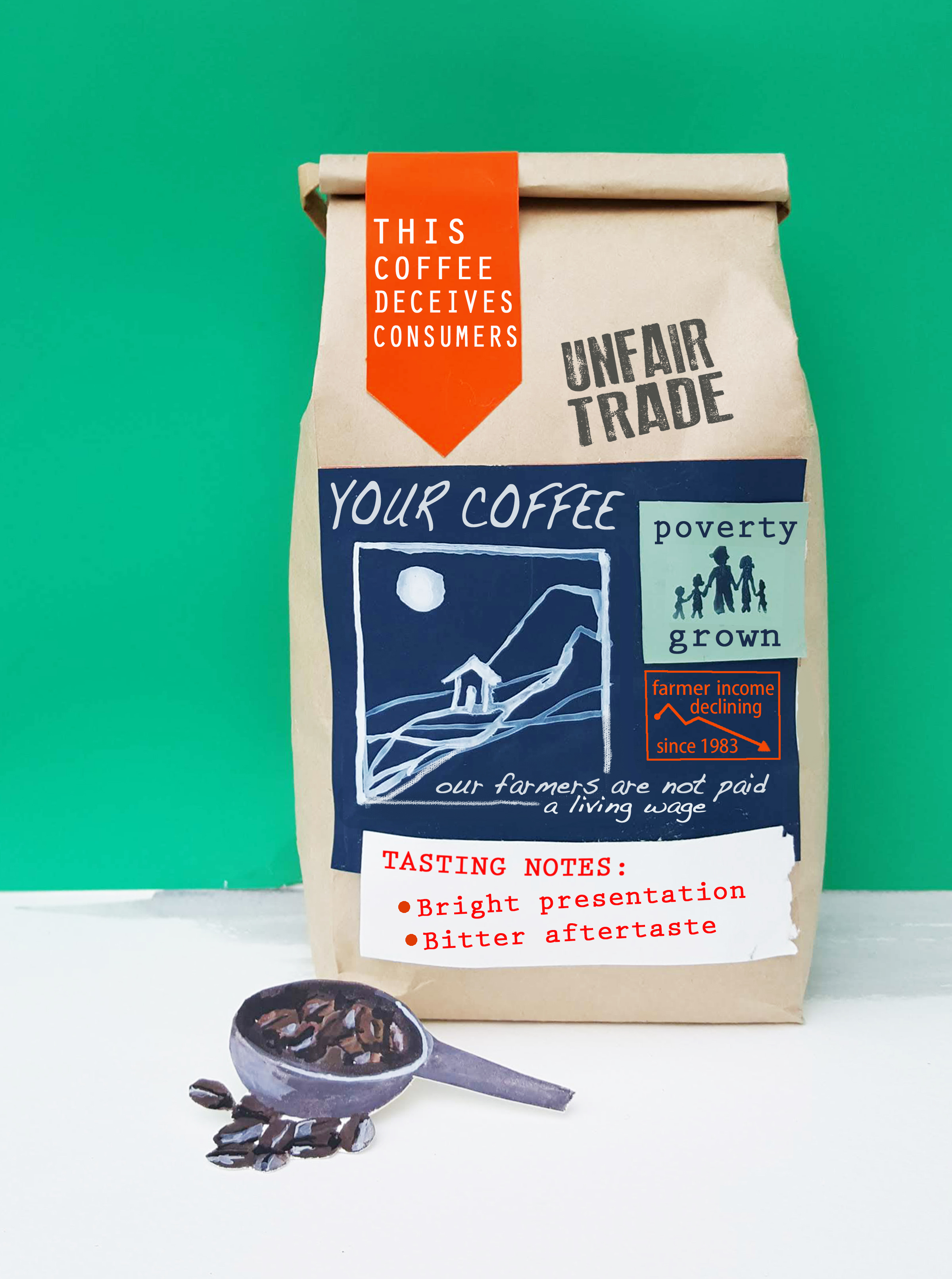 The scenery in Huehuetenango, Guatemala is nothing short of spectacular. High up in the mountains, it’s lush and vibrant, awash in eye-popping shades of dense green. It’s the exact kind of image you usually see displayed on a bag of coffee or framed in a café, replete with smiling farmers proudly holding their harvest. That image may match the physical landscape, but the idyllic image promoted by scores of roasters is largely a fiction, a momentary snapshot disguising a bigger picture revealed through conversations with participants of the Heifer project I was there to visit.

As my colleagues and I chatted with one particularly memorable family, the conversation turned on its head as we asked Osma Recinos, a coffee farmer in the community of Villa Nueva, about the state of their living conditions. She turned to me and said, “What we need is money,” and proceeded to deftly run down the numbers. To house and feed the family, send the kids to school, and cover all basic expenses, the family needed $7,500 a year. Although they produced more high-quality coffee than anyone else nearby, only $2,500 was earned annually. “The only option is for my husband to leave,” she said, to work in another part of Guatemala or travel to Mexico or – most likely — make the dangerous journey to the United States.

This sense of being stuck is common in the world of coffee farmers. Many find their only choice is to uproot their family from home as they seek to escape certain poverty for an uncertain future across treacherous borders. For those that stay put, it means remaining tied to coffee; not only their livelihoods but their very lives depend on this bean we all take very much for granted. With market prices in freefall since 2016 and mostly below $1 per pound since August 20, 2018, coffee farming families made immediate cuts on necessary household items and nutritious food. After just a few months, there was no money for medicine, transportation or children’s school fees. Now closing in on a year, there is barely any food or clean water, let alone money to manage any unexpected events or even basic farm investments, compounding already viscous poverty and debt cycles.

This sense of being stuck is common in the world of coffee farmers. Many find their only choice is to uproot their family from home as they seek to escape certain poverty for an uncertain future across treacherous borders. For those that stay put, it means remaining tied to coffee; not only their livelihoods but their very lives depend on this bean we all take very much for granted.

Much of the world has been buzzing about the pricing collapse. It’s often been called a crisis. This implies something relatively new, a dramatic departure from what was before. Such a name is misleading; while the market price has indeed fallen dangerously low, it has teetered between unprofitable levels of stagnation and decline for decades. We, as consumers, don’t see this volatility; the cost of a grande latteor bag of medium-roast beans does not often significantly change. We are not meant to see behind the scenes of this unbalanced industry where farmers, the backbone of every bean, struggle to survive while corporate executives pocket millions of dollars each year. Indeed, farmer poverty directly stimulates corporate profits; as the price for unroasted coffee becomes cheaper and cheaper for the private sector to purchase, less and less income is earned by hardworking families who were already deeply poor long before the market crashed. Retail reality is carefully designed to appear fair and consistent, but prices for the raw material traded on New York’s Intercontinental Commodity Exchange actually look more like a wildly exaggerated version of what one typically sees at the gas pump, fluctuating dramatically on a monthly or even weekly basis. While coffee drinkers’ budgets needn’t regularly adjust to accommodate these ongoing trading instabilities, coffee farmers’ entire existence is thrown into a tailspin with every price move. 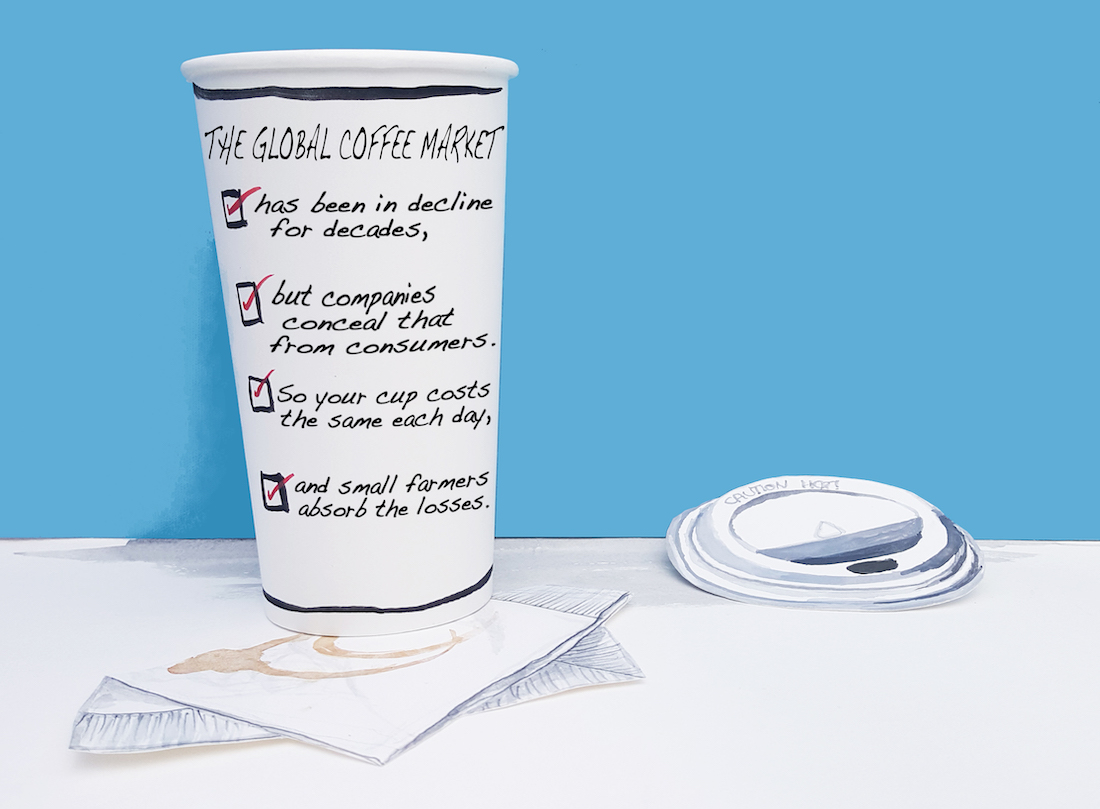 As Heifer International can attest from 12 years of working with farmers in coffeelands around the world, breaking even on coffee farming has always been a challenge and securing a living income from it nearly impossible. Coffee prices have fallen by two-thirds since the early 1980s and with them, the income of small-scale coffee farmers. It’s hard to imagine any profession where the median salary would be 75 percent lower today than it was almost 40 years ago. To put this into context, that’s like the average teacher earning $17,644 in 1980 and earning $4,411 in 2017 (in reality, the average teacher in the United States earned $60,483 in 2018). But in the coffee industrial complex, the normal rules of inflation and basic business increases don’t apply to producers. Farm costs have skyrocketed due to a variety of factors, including: input prices, combatting climate-related crop diseases and pests, necessary expenditure of working degraded land and the high expenses associated with meeting increased market demands. Meanwhile, compensation has plummeted. Currently, when most medium-term farm expenses are considered, the average small-scale coffee farmer is operating at a staggering 46 to 59 percent loss.

As Heifer International can attest from 12 years of working with farmers in coffeelands around the world, breaking even on coffee farming has always been a challenge and securing a living income from it nearly impossible.

This is horrifying in and of itself, a shocking number that pales in comparison to the shockingly grim reality of what it means to be a coffee farming family. Possibly even more unsettling is the continued profitability of coffee companies in comparison. With the global coffee retail industry valued at more than $200 billion, there should be plenty of money to go around. However, only a measly 0.6 to 1 percent of these huge profits gets returned to growers. A Nicaraguan household of five is living off of a total yearlyincome of $1,682 — which includes sales of other crops and additonal off-farm employment — an almost unimaginable contrast to the $11.5 million base salary raked in by a popular coffee corporation’s CEO. This same company has recently pledged to return $25 billion to shareholders by 2020, which is at least 12 times more than the total coffee value all the world’s coffee farming families collectively retain.

Heifer has known this. We’ve wrestled with this. We’ve discussed, debated, researched, analyzed, joined working groups, tested different project approaches and developed new partnerships in attempts to address it. We’ve moved from helping coffee farmers diversify their income to improving coffee production and combating coffee rust fungus to forming cooperatives that put more power in the hands of farmers and then connects them to more profitable markets locally and internationally.

As the situation grows increasingly more dire and our learnings about these complex webs of inequity deepen, the real question is: What are we going to do about it?

Regardless, with coffee traded at $0.95 per pound as of early 2019, prices have gone from systemically unscrupulous to downright exploitative. For farmers and their communities, it’s catastrophic. The consequences of this downward price spiral ranges from starving families to migrant caravans to loss of access to education and medical services. As the situation grows increasingly more dire and our learnings about these complex webs of inequity deepen, the real question is: What are we going to do about it?

Through the years, Heifer International has done extraordinary work in the coffeelands. Thousands have had the opportunity to experience “a hand up” through our coffee projects. Their lives have unquestionably changed for the better; they are more profitable, resilient, cooperative, business savvy, gender sensitive, environmentally conscious and food secure than before. I am profoundly proud of all we have accomplished and truly believe this organization spurs fundamental improvements unlike any other. But it is not enough.

As with all commodities, the nature of the coffee industry undermines the longevity of these successes and ultimately prevents them from going much further. Despite the best efforts of all involved, people cannot reach their full potential if they are economically oppressed. They cannot continue to transcend their circumstances when income streams die. We cannot legitimately end hunger and poverty without beginning to speak up against the multitude of forces keeping them in place. Creating crippling dependency is unconscionable. Forcing people to sell a product below the cost of production is ruthless. Simply put, prices for coffee are inhumane. The system has failed these farmers; by continuing to operate within the confines of this system, we will also fail them. There is no other option but transformational action on a transformational scale. 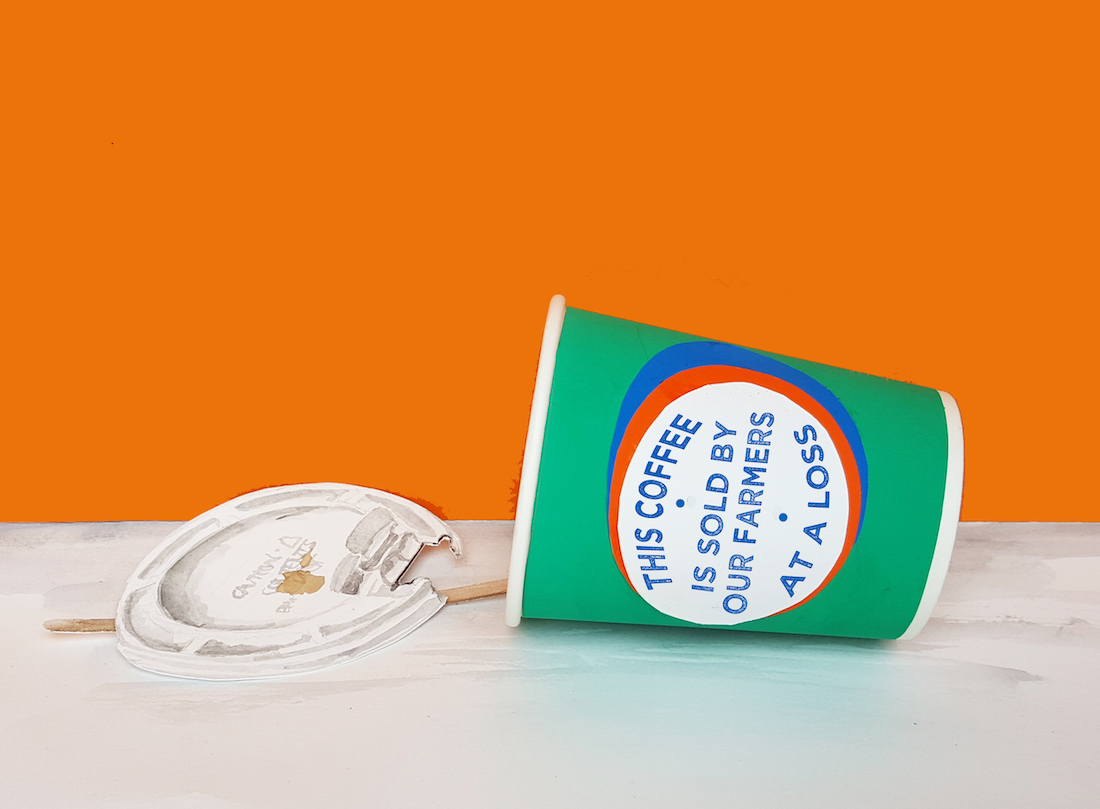 Our eyes are wide open, and we must ask ourselves some difficult questions. Can we continue pushing for incremental change from inside the belly of the beast? Have we been unintentionally complicit in perpetuating the status quo? Should we have minimum price requirements when it comes to working with coffee companies? Do the project-by-project benefits  of corporate funding outweigh the collective harm often caused by corporate practices? Have we been so focused on doing the best possible work within the system that we neglected to question the system itself? What is the best way to uphold the obligation we have to our donors and all the families we serve? Ultimately, are we feeding the change, or are we feeding into marketing schemes?

Intentionally or not, your daily caffeine habit supports a bigger system — one that deceives consumers while taking advantage of desperate families. The only way out is for companies to pay more for coffee, the product that so generously fills the pockets of a few while millions of coffee producing families starve.

Coffee is at a crossroads and with it, Heifer’s participation. The point of staying on the same course has long passed. We cannot continue with business as usual. Heifer will be among the first to say no more. The last year inside our walls has been filled with self-reflection and grappling with necessary decisions. Now we are deciding which next steps to take, mobilizing producers, rallying with consumers and advocating for the changes we want to see in the world.

As we do so, Heifer also challenges you to stand beside us. Intentionally or not, your daily caffeine habit supports a bigger system — one that deceives consumers while taking advantage of desperate families. The only way out is for companies to pay more for coffee, the product that so generously fills the pockets of a few while millions of coffee producing families starve. The next time you buy a cup, question how much of that $5 Guatemalan single origin is actually going back to Osma Recinos and her family in Guatemala. Consider every sip an opportunity to take a moral stance.

Indeed, the time has come to forge a new path, one that unequivocally and unconditionally puts farmers first.