Power-couple Socha Sosoma and Stella John are a picture of success. At the front of their house in Mbutu, Tanzania, the dusty soil gives way to a vibrant kitchen garden brimming with onions, peppers, lettuce and every other good, green thing. Around back a pot of ugali, a savory cornmeal porridge, bubbles on a clay stove while plump chickens roost in a nearby shed. Sosoma and John sit in the sun together amid their achievements, talking and laughing while she cuts onions for their midday meal. Occasionally, they pause their conversation to stir the ugali. 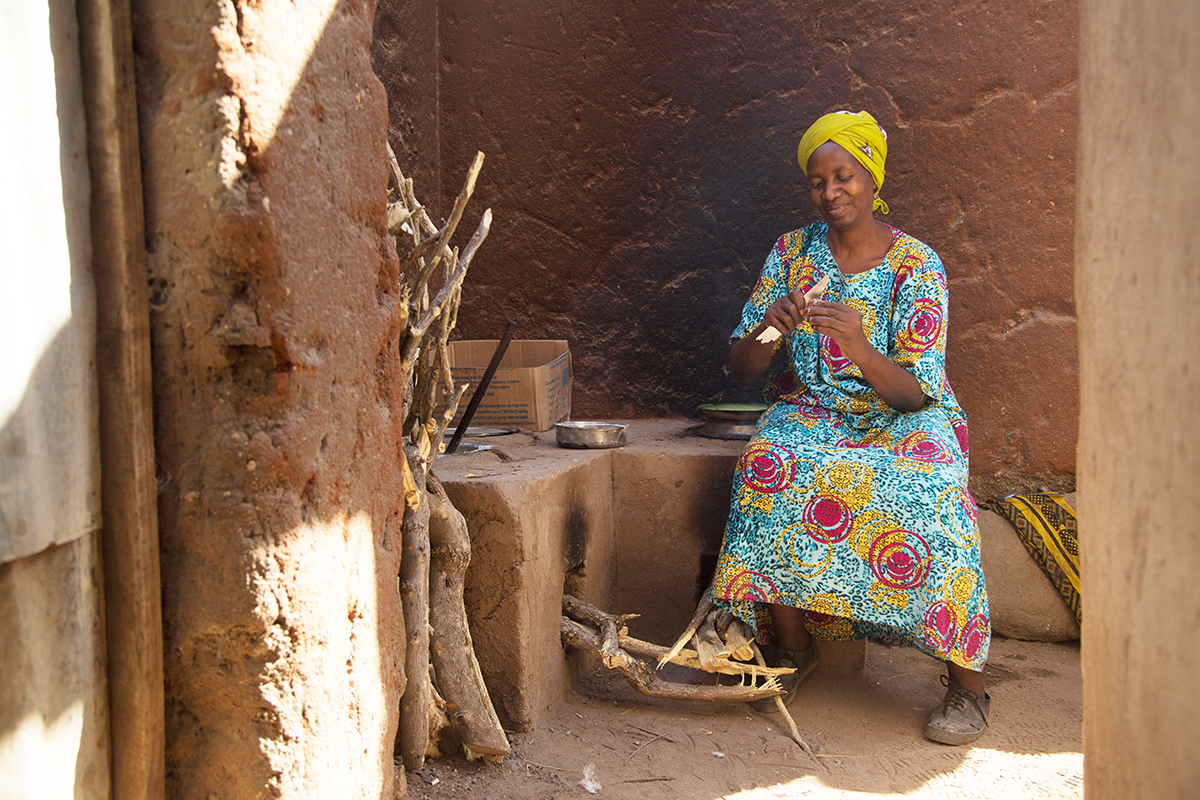 Once Stella and her husband were on the verge of emigrating from Igunga because of climate-change-induced drought. Stella convinced her husband to stay and join the Igunga Eco-Village Project.

In 2016, Sosoma and John joined Heifer Tanzania’s Igunga Eco-Village Project, but before that, life for the couple wasn’t so sunny. They struggled to keep their family of seven afloat. A farmer and craftsman by trade, Sosoma did whatever he could to meet his family’s needs, but it was never enough. “I was struggling to do any job so that I could earn income,” he said. “So, I did not have a specific job to do other than struggling and looking for any opportunity.”

Mbutu is located in Igunga, one of the driest districts in Tanzania. Garnering a mere 20-27 inches of rain a year, it is a difficult place for farmers to make a living. Sosoma took construction jobs as he could find them and planted crops he hoped would be profitable but thatrarely survived the drought conditions in the dust-choked northern region. When the plants did manage to survive, harvests were disappointing, leaving Sosoma with little income for necessities like food, not to mention his children’s school fees. “I used to ask for money to buy food and vegetables, and my husband could not give [that to] me,” John said.

John ran a small grocery business from her home. With no garden of her own and no idea how to grow one in the arid soil she bought vegetables from her local market for wholesale prices and sold them to neighbors. While the demand for fresh food was steady, the availability of green 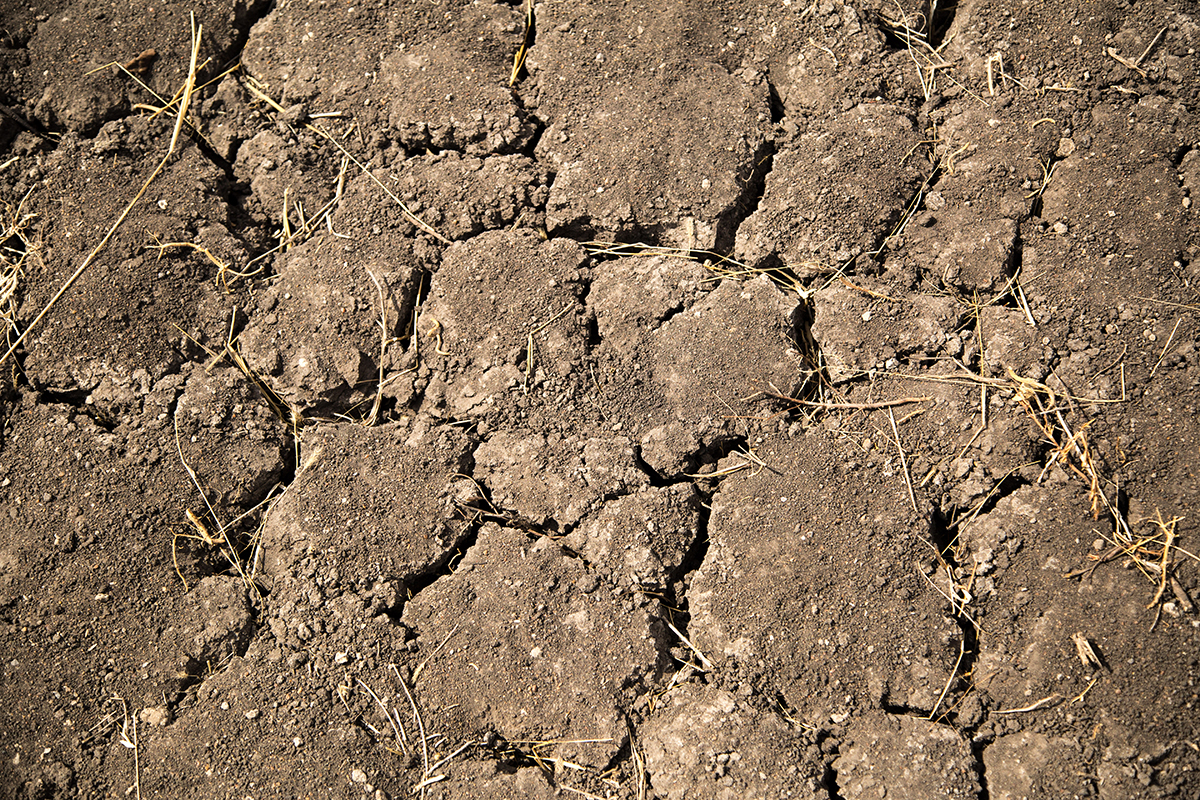 Mbutu Village is located in Igunga, one of Tanzania's driest districts. Garnering only 21-27 inches of rain a year, Mbutu is a difficult place to earn a living for farmers like Socha and Stella.

vegetables was not. She would walk a long way to other villages to find crops that had survived the scorching sun long enough to make it to market. Despite her best efforts, her children would still go to bed hungry. Even when food was available, firewood was scarce, and her stove became another hungry mouth to feed. Sometimes, John or Sosoma would have to trek up to three miles before finding anything they could use as tinder. The wood-burning stove ate more fuel than the family did food and produced a lot of harmful smoke.

Desperate and seeing no other solution to their struggles, Sosoma and John decided to take their children and migrate to another area where they could, hopefully, carve out a life for themselves or, at least, escape the drought. News of the Heifer Tanzania project coming to the district of Igunga halted their flight and made John prick up her ears. “When I heard climate change adaptation strategies were coming into our village, I decided to stay,” she said 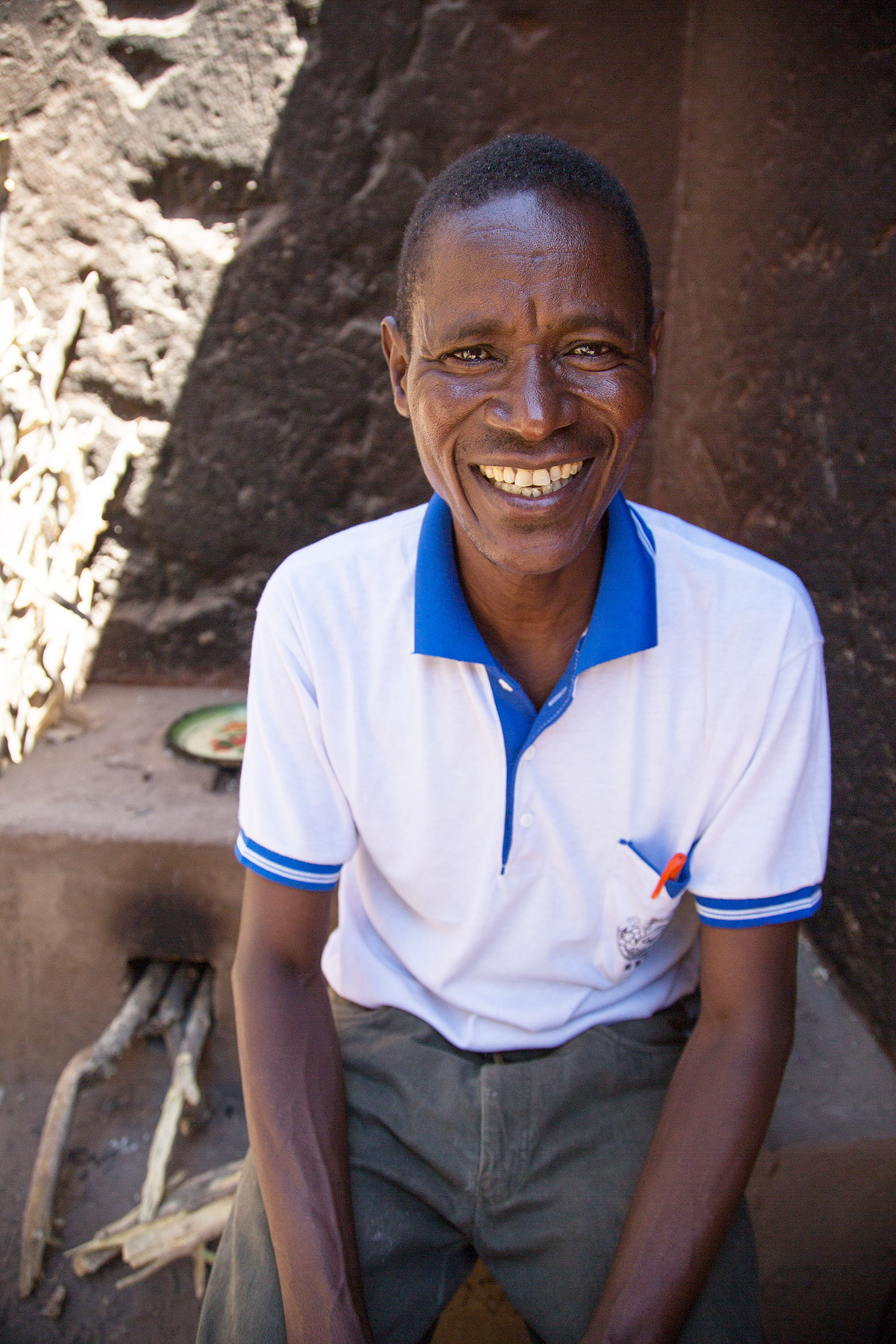 Since joining the Igunga Eco-Village Project, Socha has become an artisan and an advocate in his community for environmental awareness. Here, he sits on the improved stove that he built for his wife Stella.

Thanks to training from Heifer Tanzania, Sosoma and John learned not only how to raise enough food and earn enough income in challenging conditions, but also how to combat the effects of climate change in Mbutu.

Agroforestry and natural resource management were key parts of their education alongside training in chicken husbandry, kitchen gardening and less tangible but equally as important topics like gender equity, spirituality and money management. Through these lessons, Sosoma learned to plant certain drought-resistant plants around his crops to protect the soil from erosion, encourage biodiversity and trap rainwater, all while exponentially increasing his harvests. “With agroforestry, I learned that I could cultivate a small portion of land, and the harvests become huge,” he said. “With agroforestry, we harvest rainwater in our field. We put vetiver around the crops so that when water enters it gets stuck on the vetiver. The vetiver also adds soil fertility.”

For Sosoma and John, the proof of the effectiveness of these methods is in the proverbial pudding. Before he joined the Igunga Eco-Village Project in 2016, Sosoma grew maize and green gram (also known as mung beans) with disappointing results. Each season, he would harvest an average of 44 pounds of green gram and 8 pounds of maize. These harvests were so small that they were mostly used for family consumption with the leftovers sold for minimal income.

Using the methods he learned from Heifer Tanzania, Sosoma has seen his green gram harvests quadruple in volume during the last two years. In 2018, he reaped a whopping 220 pounds of the legume, enough to sell with plenty left over to keep for his family. These improved harvests gave Sosoma the financial freedom to invest in cotton, a crop he once considered too expensive and too difficult to grow. In 2018, under Sosoma’s watchful eye, the first cotton harvest produced 1,200 pounds of fluffy, white crop and earned the family the equivalent of $430, an amount Sosoma and John could once only dream of earning. And, thanks to training in drip irrigation and climate-smart gardening, John has her own harvests to tend to. Her kitchen garden provides enough onions, tomatoes, eggplant, sweet potatoes and greens to give her family a much-needed boost in nutrition and fill her grocery stall with fresh produce. 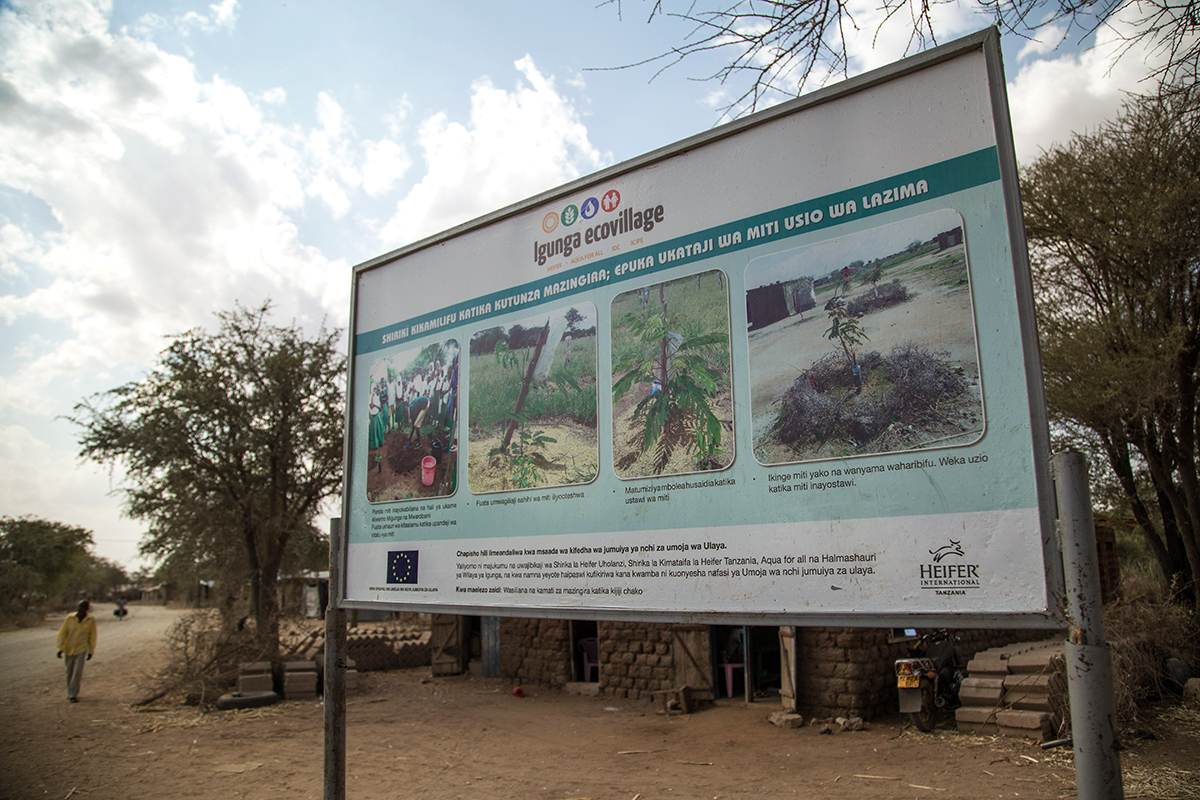 Through the Igunga Eco-Village Project, farmers like Socha and Stella are learning the skills they need to not only survive in the face of rising temperatures and frequent drought, but to combat climate change itself.

With a natural talent for raising chickens and a plethora of trainings under her belt, John is the poultry expert of the family. In the past, the couple tried raising poultry but were forced to sell the majority of their flock to pay for their oldest daughter’s school fees. Besides that, they were not aware of how to properly care for the birds and lost some to injury or sickness. Heifer Tanzania’s trainings taught John how to build shelters that would keep her birds out of the elements and safe from injury, and also stressed the importance of vaccines for the health of her birds. Today, she not only has her own flock at home but is a certified animal health worker and the elected leader of a local chicken cooperative. “When the group members get problems with their chickens, they consult me, and I advise accordingly,” she said. John regularly travels to neighboring villages to offer her services and deliver vaccines to her fellow poultry farmers whose birds are struggling.John’s own chickens provide more than just eggs and experience; they provide the peace of mind that comes with knowing that she can financially provide for her children, regardless of the state of her husband’s harvests. “When my kids need some school materials … sometimes I sell chickens,” she said. Thanks to John’s flock, all of her children’s school fees have been paid.

“We are no longer planning to shift from this place.With the knowledge we have, even [when] some climate changes effects occur, we’ll be knowledgeable and it won’t affect us.” Socha Sosoma, Igunga Eco-Village Project Participant

Heifer Tanzania is helping farmers adopt climate-smart methods to grow foodsuccessfully while healing the Earth. And by adopting improved wood-burning or biogas stoves that limit smoke inhalation and deforestation, project participants are cooking food in a climate-smart way, as well. Heifer Tanzania trains local craftsman in how to build these more efficient stoves. In this way, artisans hone skills they can use to earn money and boost health at the same time. Sosoma leaped at the opportunity to put his craftsman skills to good use and spread his newfound knowledge about caring for the environment to his neighbors. In 2017, he became certified as an artisan for the Igunga Eco-Village Project as well as a community facilitator in natural resource management, agroforestry and solar power. One of Sosoma’sfirst acts as a newly minted artisan was to build an improved stove for his wife. As opposed to their traditional stove, which required Stella John to cook over an open flame, the family’s improved stove is enclosed and pipes smoke away from the house with a specially constructed chimney. It uses half the firewood of its outdated counterpart, making it an important ally in the fight against deforestation. For John, the combination of the improved stove and the kitchen garden provided relief from a huge amount of toil. “In the past, we used to search for firewood far away from here,” she said, “and we went into the forest in search of firewood because we were consuming a lot of firewood. We were also walking a long distance, even up to Igunga Town, in search of green vegetables. But now we have developed our kitchen garden here so it’s just accessible.” 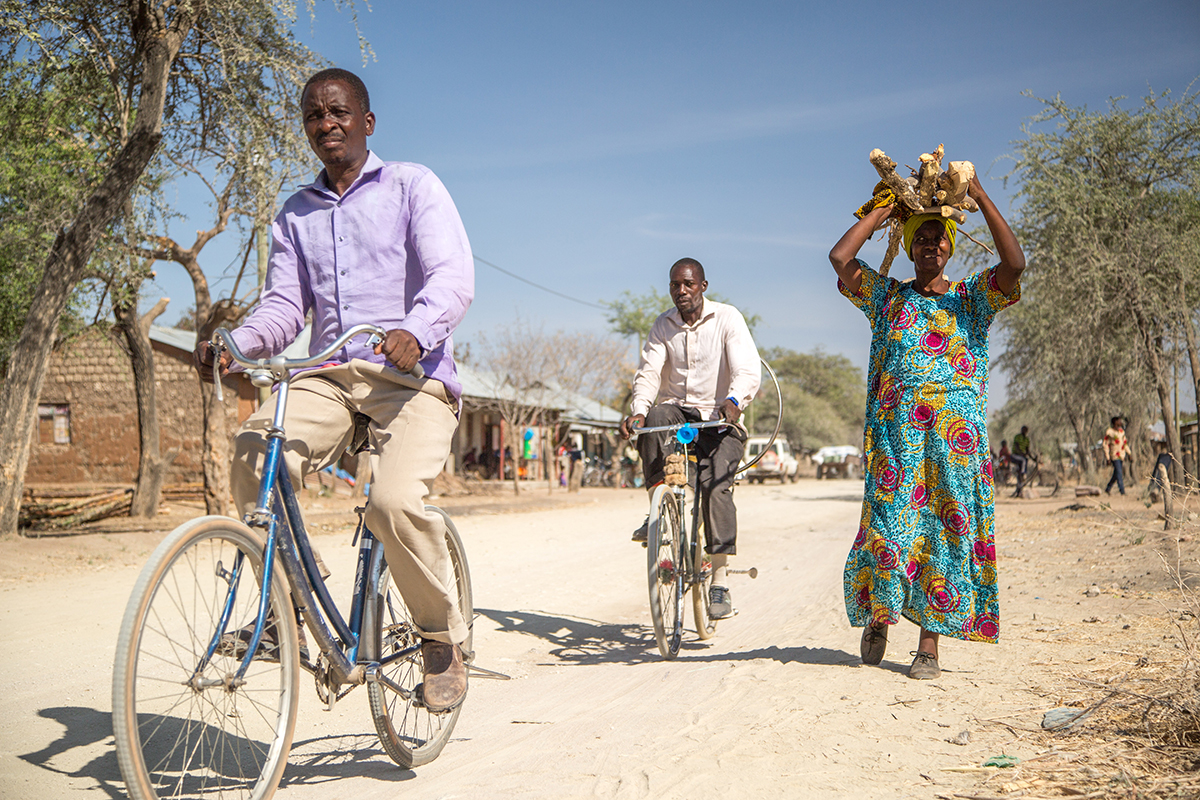 Before using an improved wood stove, Stella and her husband would have to walk up to 3 miles each day to find enough fuel to cook their meals. Their improved stove uses significantly less firewood.

To date, Sosoma has constructed 15 improved stoves in villages around the district, earning about $5 for each. The orders aren’t coming in as quickly as he would like, but as he and Heifer Tanzania continue to teach communities in Igunga about the importance of conserving trees and the health hazards of inhaling smoke, the demand will rise. In the meantime, while the new technology is slowly adopted, Sosoma, John and the other farmers involved in the Igunga Eco-Village Project are putting other methods of renewing the environment to work in a way that was once difficult to imagine. “After we were taught by the project on natural resource management, it has empowered us on tree planting, and now we have more trees planted in our area,” Sosoma said. “Before the project, we didn’t have trees nearby, until we reached the [neighboring] district. But now, we have trees in Igunga.”

Neither Sosoma nor John know what the future holds. What they do know is that thanks to their own hard work and a little guidance from Heifer Tanzania, they’ll be ready for whatever comes their way, and they will make sure that their children are, too.

“We are no longer planning to shift from this place,” Sosoma said. “With the knowledge we have, even [when] some climate changes effects occur, we’ll be knowledgeable and it won’t affect us … If it’s drought we are already taught on how to overcome drought effects. If it’s water, we’re taught on harvesting rainwater. If we have enough rainfall in our area, we’ll be planting more trees.” 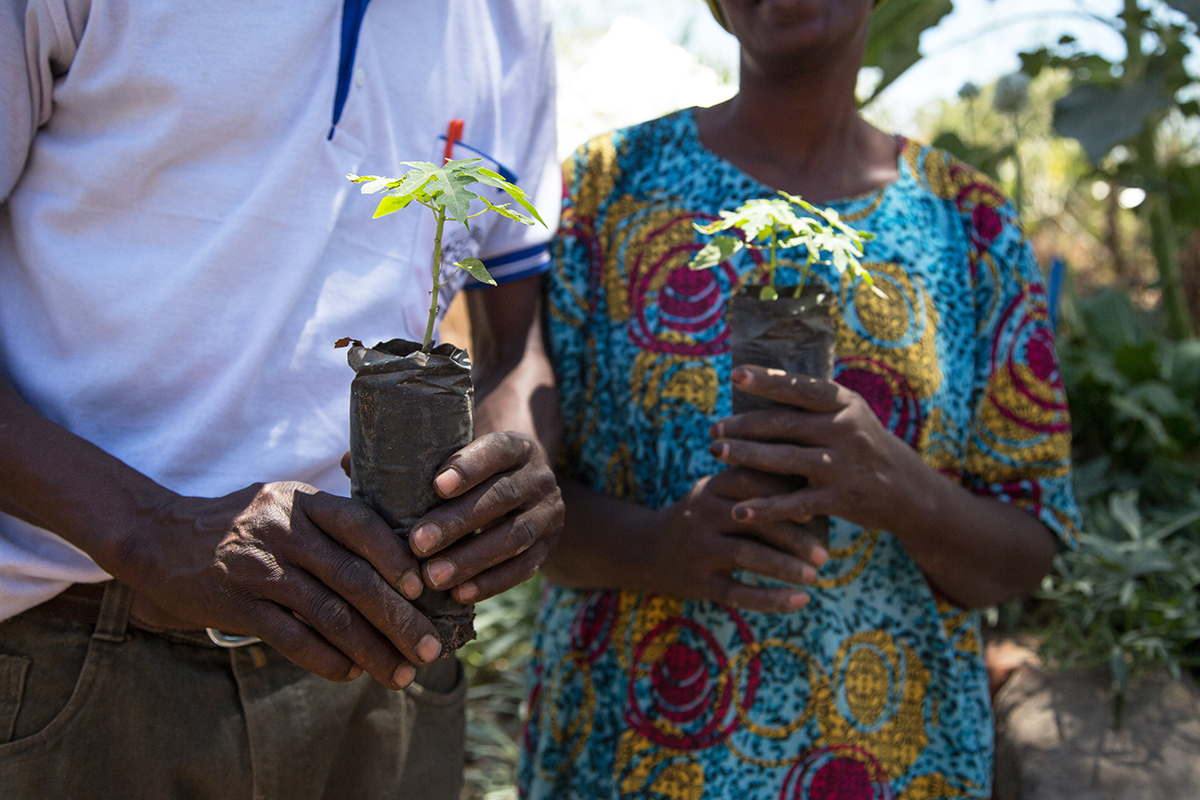 Since receiving training from the Igunga Eco-Village Project, Socha and Stella are both passionate environmentalists. They have a small nursery full of tree seedlings that they intend to plant in their community.

For now, though, regardless of the challenges and triumphs ahead of them, Sosoma and John take a moment to sit back and enjoy the ugali.