It's not always easy to quench your thirst in Igunga, Tanzania. Earning a name as one of the driest districts in the country, Igunga typically receives 22-27 inches of rain every year. And that’s if residents are lucky. In recent years, drought and increasingly erratic rainfall have hammered the region, courtesy of climate change. These changing weather patterns combined with a lack of options for water storage are causing big problems for Igunga’s citizens and agriculture. But, since the Earth doesn’t seem to be cooling any time soon, what is there to do?

Dry river beds are common sights in Igunga (especially during the dry season). When rivers run dry, many communities are forced to make hand-dug wells in the dry beds, like this one. Here, a woman from a nearby village is visiting this "well" to wash clothes. There were no other available sources of water.

Enter the Igunga Eco-Village Project. Through the Eco-Village project, Heifer is partnering with communities to combat climbing temperatures and to give families the tools they need to survive and thrive in the face of a changing world. This includes finding sustainable sources of water in the drought-stricken zone. I visited the project and learned about several different techniques that communities and families are using to ensure that water access isn't a dream, but a reality.

To my untrained mind, wells seem like a natural solution to any water problem. Unfortunately, the reality is much more complicated. Igunga, for example, is blessed with sandy soil that won’t support deep wells. Shallow wells that collect water from closer to the surface are bridging the gap, but even they aren’t easy to build. Heifer Tanzania staff and engineers tested over 17 potential sites around Igunga and only found four areas that could sustain a shallow well. 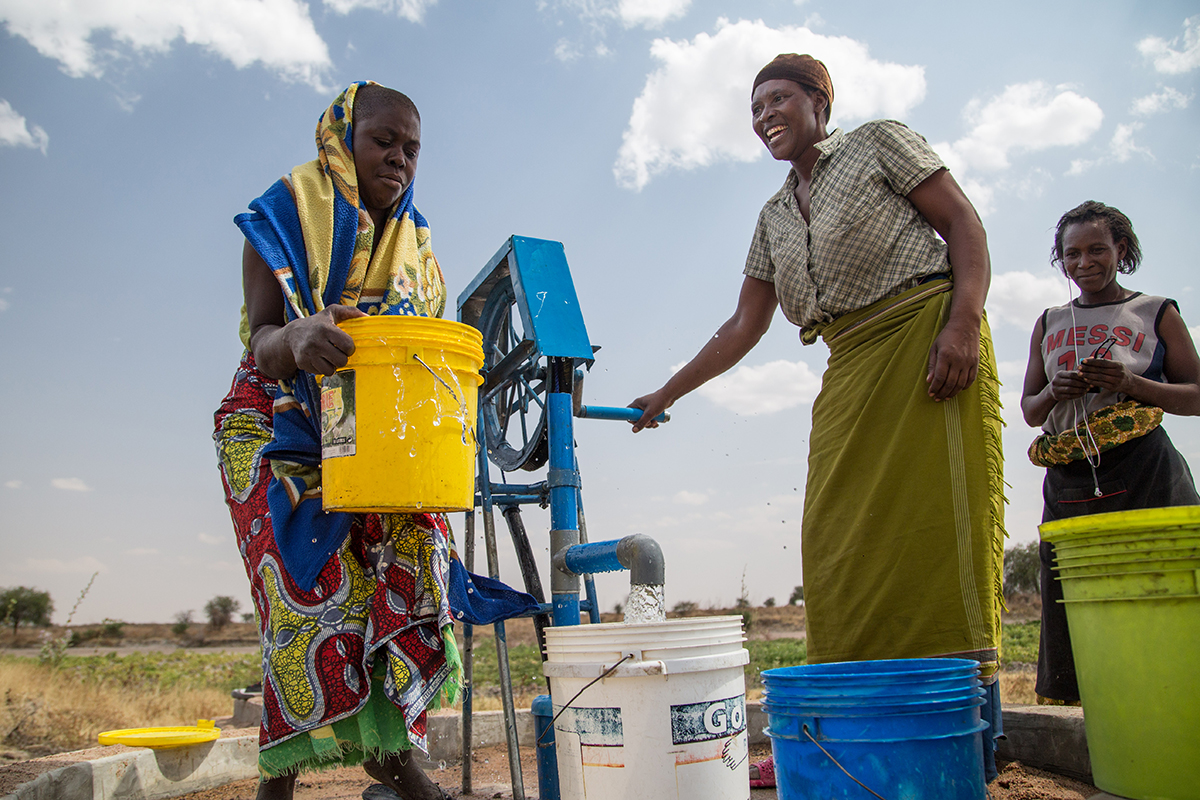 Miriam (center) and her neighbors gather at a newly opened shallow well. Before this well was built, the women had to dig their own wells in the dry riverbed. They were among the first to take water from the well.

Not to be deterred, Heifer Tanzania has partnered with communities to build two new shallow wells at these viable sites and has plans to build at least two more. Additionally, existing wells that are broken or dry are being repaired and rehabilitated so that they can, once again, provide water to the people who live near them. So far, a total of eight wells have been built and/or rehabilitated.

Can you imagine receiving treatment at a hospital that has no clean water? Or coming to your doctor’s office and leaving with a case of dysentery? For the people of Mwabakima Village in Igunga, Tanzania, this was the reality of their medical care. Mwabakima has something that many neighboring villages don't - a dispensary, a small clinic that provides medical treatment and medicine to families in rural areas. What Mwabakima doesn't have, though, is clean water. Or, at least, it didn’t before 2016. Like many other villages in the Igunga district, the soil in Mwabakima is too sandy to support a well, so the only fresh water available to the villagers (including patients in the dispensary) came from the nearby river. Though the river water was cold and refreshing, it wasn’t clean and put those who drank it at risk of contracting dysentery and other water-borne illnesses. Understandably, this caused would-be patients of the Mwabakima dispensary to search elsewhere for treatment, even driving them to travel long distances to neighboring districts. 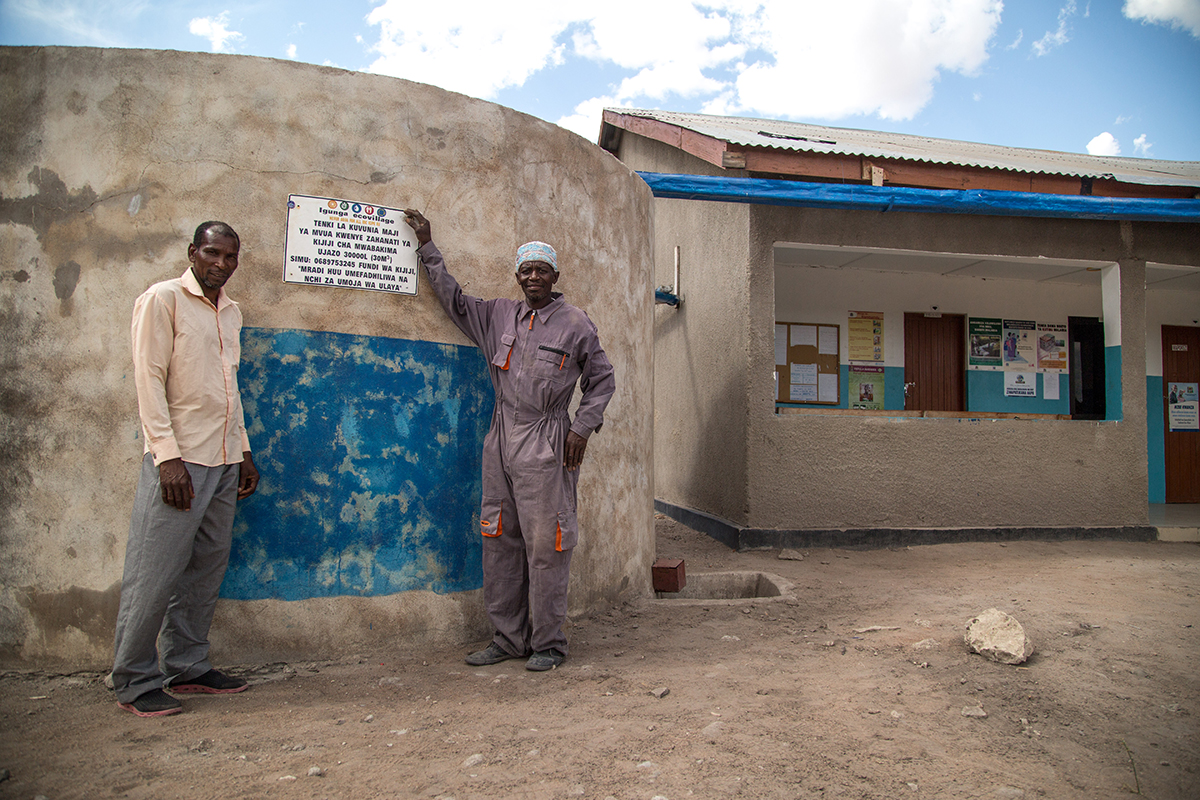 Mwabakima Village chairman Silvanus Buluba (L) and local artisan Masanja Buzali (R) stand next to the village rainwater harvesting tank. After receiving training in construction from Heifer Tanzania, Masanja was able to built this tank and two others in Mwabakima.

The solution came in the form of a 8,000 gallon rainwater harvesting tank. Instead of relying on a source of running water or being tied to a particular geographic landscape, the harvesting tank collects rainwater and runoff from the dispensary roof through a filtered system and stores it safely until it is used. Currently, the water is used to treat patients in the dispensary. It is also available to any pregnant women in the village and the elderly.

While this tank might seem like just a small solution to a big problem, Mwabakima village chairman Silvanus Buluba can testify that it is making waves in the community.  “We have an increased hospital delivery for women but also a raised number of patients accessing this dispensary,” he said. “In the past, people used to go to dispensaries and hospital facilities outside the village, but now everyone’s being treated here. This is due to the availability of water. In the past, only two pregnant women delivered here, but for now, in a month you can get seven pregnant women delivering here.” 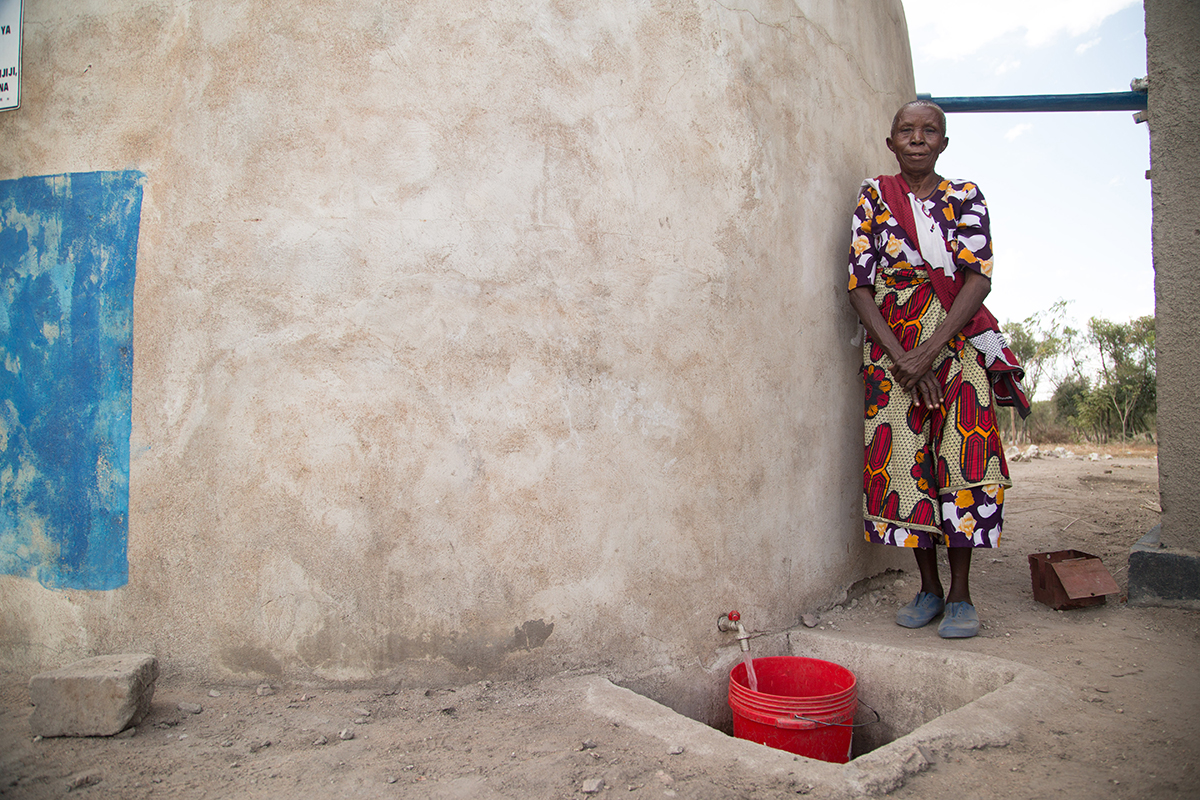 Nyamizi Nikinga gets water from the dispensary's rainwater harvesting tank.

The Mwabakima dispensary now averages five patients a day. And the tank isn't just affecting Mwabakima's elderly and sick - it's making a splash in the community as well. Chairman Buluba remarked, "Being constructed at the dispensary area, almost everybody can see this tank. Through seeing this tank some community members are now getting prepared to adopt this technology in their homes."

That's where artisan Masanja Buzali comes in. Buzali lives in Mwabakima village and so is no stranger to the water crisis. Seeking a solution for himself and his community, he tried to create rainwater tanks and collection vessels but was unsuccessful because he had no training on how to build them. In 2016, however, he joined the Igunga Eco-Village project and became a Heifer-certified artisan. Using the skills he learned from Heifer Tanzania, he was able to construct the Mwabakima dispensary rainwater harvesting tank. 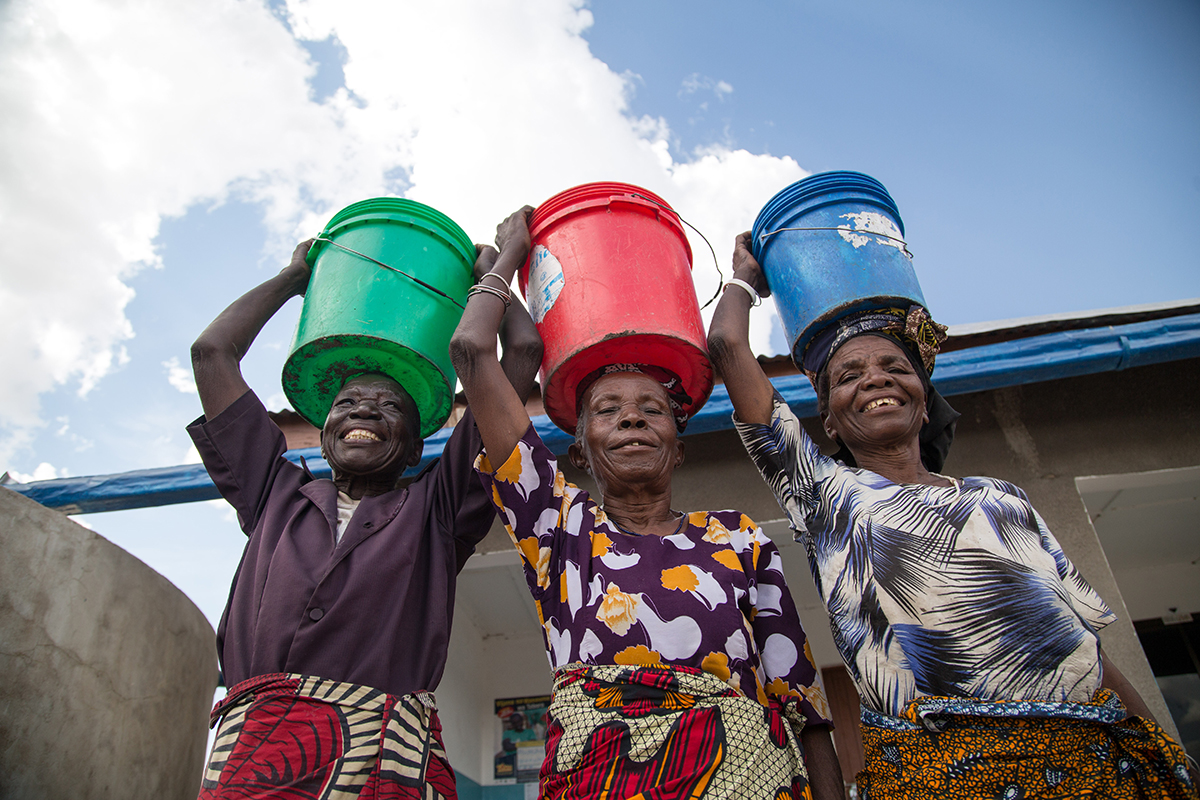 Three of Mwabakima's "bibis" (grandmothers), Monika Maduka (Left), Nyamizi Nkinga (Center) and Luja Kabelele (Right) carry buckets of clean water back to their homes a short way from the dispensary. Before the tank was built, they each had to travel several kilometers a day to get water from the nearest river.

Once the large tank was constructed and people saw how well it worked, Masanja received two commissions from local families for smaller versions that they could use in their homes. According to Chairman Buluba, the community has set a collective goal to have a small rainwater harvesting tank at every home. With a low price point of 25,000TZ Shillings (about 10 U.S. dollars) for a small tank and a capable local artisan like Masanja Buzali in the community, that goal isn't as crazy as it once might have seemed. Soon, with a little luck, each family in Mwabakima Village could have clean water.