During the month of October, we will be highlighting Heifer's work to empower women in a series we're calling the Power of WE. The series began Oct. 4, and many of our posts will focus on women who are becoming entrepreneurs in their own right. Today we continue the series by featuring Nono Nkgadime from South Africa. 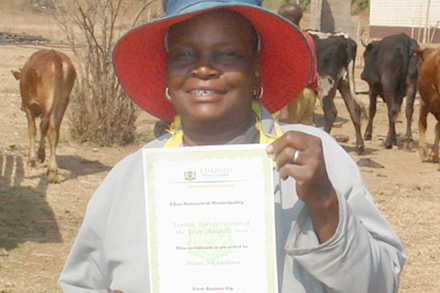 Nono Nkgadime displays an award she received in a Female Entrepreneur competition.

Tafelkop is a remote, rural village situated about 124 miles from Polokwane, the capital of Limpopo Province, South Africa. This village consists of a few small houses and large tracts of land. The villagers do not have access to much infrastructure and have to travel into the nearby town of Groblersdal for any needed supplies.

Nono Nkgadime, 68, is one of the many villagers who have lived in Tafelkop their entire lives. Nono is a widow and has eight children. Two of her children and three of her grandchlidren tstill live with her and depend on her for financial support.

Nono has been heavily involved in agriculture ever since Heifer South Africa partnered with her community to start a Hereford project in 2002. Since joining the Hereford project, Nono now has a large vegetable garden and 11 cows. Both provide a stable source of income for Nono and her family.

Every day Nono wakes up at 5 a.m. First she checks on her cows and makes sure they slept well. She then checks on her vegetable gardens to ensure all her vegetables are growing well. After that, Nono spends a few hours cleaning her house. Because the family’s only source of water is a tap situated in their yard, it takes Nono a while to do all the cleaning. After her house is clean, Nono takes a short tea break before heading off to work in her fields.

Nono’s late husband left her four acres of land, which she has been using to grow her vegetables ever since Heifer provided her with the necessary seedlings, skills and knowledge. Due to the size of the land, Nono hires a local man and pays him on a monthly basis to assist her with tasks, such as spreading cow manure on her fields during planting season, which is particularly difficult for a woman her age.

The children have also begun to help her in the gardens. Even with the extra help, Nono spends most of her days planting, irrigating and harvesting her crops, which is very hard work. After she is finished in the gardens she tends to her cows, which she milks, feeds and checks for any illnesses. After cooking dinner for her family Nono makes sure she is in bed by 8:30 p.m. so she can be well-rested for the next day of farming. Despite the hard work, Nono enjoys farming and realizes the great benefits it can yield.

Nono loves living in the rural area where she has spent all of her life and would not like to live in a city. Due to the many hours she spends farming her crops and tending to her cows, she has little time to spend with friends. However, her stokvel, or community savings group, meetings with the other Hereford project members allow her to catch up with the rest of her community and exchange farming techniques and skills. If any of the women have a personal problem or would like to celebrate a wedding or birthday, the stokvel provides the space where the women can help each other and celebrate with each other.

Since Nono joined the Hereford project she no longer fears for her children’s futures. She knows that as long as they can farm the land they will never go hungry. In fact, she hopes that her children and grandchildren will all follow in her footsteps and become successful farmers themselves.

Nono was recognized for her hard work in 2005 when she won first runner-up in the livestock category of the Department of Agriculture’s Female Entrepreneur of the Year competition. Nono is just one of the amazing rural women Heifer works with every day.