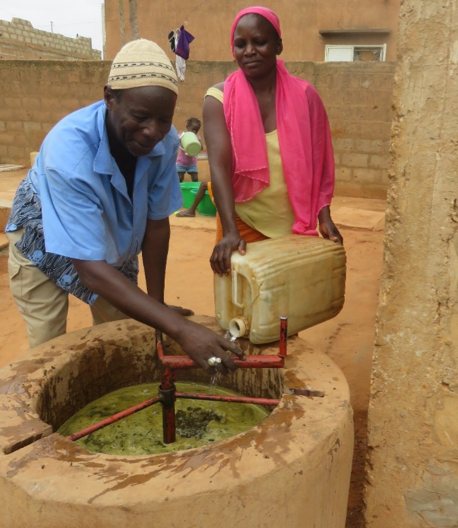 “The flame is blue, the kitchen is lighted, the yard is clean and we rest more than before,” Mamadou said.

Mamadou and his wife Yacine Ciss (45) live in Sorokhassa community in Sindia, about 20 miles from Thies, home of Heifer's Senegal office. The couple has eight children – five boys and three girls – ranging from 6 to 19 years old. The family lives with the husband’s extended family.

The family’s journey with the Senegal Blue Flames Project started in March of 2016.

It was Mamadou's responsibility to dig the septic for the doom and to provide sand, gravel and water.

“When I sourced for labor to dig the septic, the cost was too high, so my family and I decided to invite our friends to help us,” Mamadou said. “Four of our friends joined my family, and we took one week to dig the required septic. We appreciated them with 50,000 FCFA (about $100).”

The Diouf family loves husbandry, and they own 28 cattle, nine sheep, eight goats, four horses, 10 local fowls and 15 pigeons. The project gave the family materials  to reinforce their stable and a biogas digester from Heifer Senegal.

The Dioufs set the pace for the project: they were the first to finish their biogas digester.

We have a stream of visitors every week to see how the technology functions. Mamadou Diouf, Heifer project participant

“This biogas project has made me popular in my community,” Mamadou said. “I am the first person to ever own a bio digester in our community, and we have a stream of visitors every week to see how the technology functions.”

Mamadou said he was overwhelmed when he heard that the Heifer president and CEO would visit him to light his biogas stove in June 2016.

“It marked the height of our joy,” he said. “This project has brought us real joy; it has made us live like we are in Europe. I decided to build a biogas digester to assist my wife in the kitchen and to have more manure for our farms.”

Mamadou said the project’s most significant impact on the family was the reduced time it took for Yacine to collect wood and to cook. Previously, the family used fuel wood, charcoal and purchased gas as energy sources.

Since the family started using its biogas in June 2016, Yacine has only gathered wood a few times to cook food that she cannot cook on the biogas stove and they have not had to buy gas. 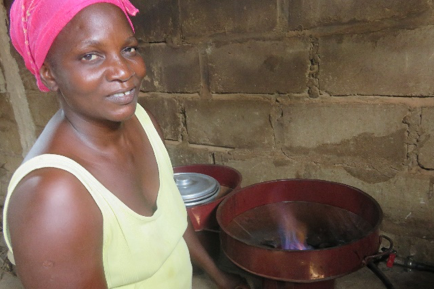 The biogas stove allowed them to move away from the disadvantages of their previous energy sources: high costs, sickening smoke, scarcity and the hassle of obtaining them, especially fuel wood. Apart from the economic gains, Yacine celebrates the cleanliness of her kitchen and the compound. She now cooks in a lighted kitchen, where she no longer has to worry about smelling like smoke or cooking on the floor, as she did before.

The biogas stove also allows Yacine to better manage her time, dropping her cooking time from four hours a day to two.

With biogas, I cook and do other activities the same time. My cooking time has dropped by 50 percent. It leaves my kitchen clean and makes me feel like a modern woman. I cook any time I want, as there is light in my kitchen. Yacine Ciss, Heifer project participant

“With biogas, I cook and do other activities the same time,” she said. “My cooking time has dropped by 50 percent. It leaves my kitchen clean and makes me feel like a modern woman. I cook any time I want, as there is light in my kitchen.”

“Before the project, I would go to the forest to gather wood in the morning and sell milk in the evening. I seldom sold up to 10 liters of the 15 liters I hoped to sell.”

Yacine now goes to sell milk in the morning, often selling her goal of 15 liters before noon and earning about $150 a month.

Mamadou’s sole source of income is tilling the soil and taking care of his animals. One of the reasons he was excited for the biogas project was to get enough quality manure to enable his fields to produce more.

“Since I started filling the biogas digester, I have had 3,900 liters of liquid manure from our 18 cubic meter bio digester, which if I sold all of I would generate 390,000FCFA (or about $780),” he said. “With this, we have given 100 liters of liquid manure to two of our friends for their farms. We have used 3,800 liters on our farms. We hope that our groundnut and millet production will increase from its current 1,800 kilograms to four tons this season.”

Mamadou said he opted for a large biogas digester because he hopes to share it with his 20 extended family members.

“Sustainability is not an issue with us, as we involve every family member in the project,” he said. “Our idea is that if one person is not around, the filling of the bio digester should not be stopped. It is our hope that as we continue in this project, we will have more manure to increase our crop production, improve our cattle breed and improve our milk production so we can increase our income.”