Editor's note: This article originally appeared in the online version of WIRED magazine. Stay tuned to World Ark magazine for "From Peru With Love," an in-depth look at Julia Monroy Rojas and other alpaca farmers who are using technology to market their alpaca wool products, in the Holiday 2014 edition of the magazine, which will be out in a matter of weeks.

Pierre Ferrari is working hard to put himself out of business.

Ferrari is the CEO of Heifer International, a non-profit that donates things like livestock, seeds, farm equipment, and other 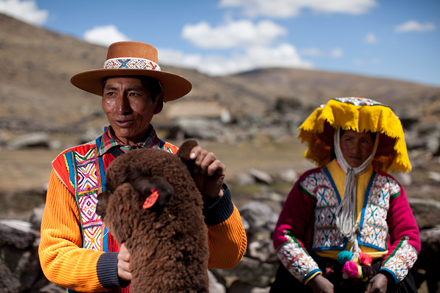 essentials to farmers in the developing world, helping them become self-sufficient. Heifer, founded in 1944, always has believed in the teach-a-man-to-fish model. But after 70 years of giving people fish and teaching them how to fish, the organization is now connecting farmers with computer technology so they can sell the fish, too. Under a Heifer pilot program in Peru, farmers are using things like Excel, Photoshop, and Facebook to sell goods online and off.

If the program works—that is, if these rural farmers can truly sell their goods to a global audience—it could eliminate the need for an organization like Heifer in the first place. And that, Ferrari says, would be the ultimate success. “The donors and the markets will be able to deal directly,” he says. “What’s our role in that? Nothing, anymore. And I want that. Our focus is to be out of business.”

The effort is just one way non-profits and stateside businesses are using technology to boost commerce in the developing world. Similar projects are underway at PEOPlink, a non-profit based in Maryland, and Overstock.com, the Utah-based e-tailer

Heifer launched the tech program in Peru in 2012. The organization already was working with a group of female alpaca farmers who make clothing and crafts using alpaca wool. Before Heifer introduced them to new technology, the farmers could sell the goods only to local tourists, and even that had been a struggle, given how little access the farmers have to global fashion trends. As Ferrari saw it, Heifer was enabling these entrepreneurs to make the classic business mistake: Making products in search of a customer.

“They’re there in the mountains of Peru, and there’s no way—absolutely no way—for them to know what would sell,” Ferrari says. “That’s where technology comes in.”

For the last few years, Heifer’s local team in Peru has been training the women—many of whom had never seen a computer before—at two local centers, one in Cusco and one in Puno. Outfitted with dozens of computers, the centers are where the women learn things like how to use Excel to write an inventory list, how to make and give a PowerPoint presentation, and how to surf the web in search of fashion trends. They trade tips with other craftspeople on Facebook and tinker with product shots on Photoshop. Already, some of the women have begun exporting these products to places like India and the US.

Perhaps more important is how this access has helped reposition the women in their local communities. On a recent Skype call from Peru, Cleida Incacutipa, Heifer Peru’s technical project manager, explained through a translator that many of these women never had an elementary school education and were primarily relegated to housework. Now, she says, “the ladies are participating, generating income for the family, and organizing together.”

It has even impacted local politics. “We’re very close to elections,” she says. “The people who want to be mayor now think the ladies are important.”

Ferrari admits the Peru project is merely a proof of concept, and access to technology can’t guarantee success. After all, some of the most well-funded, connected businesses in the world still fail. But if the Peru program can succeed in at least providing these women with a living wage, Ferrari says he’ll begin thinking about launching similar programs in some of the 34 other countries where Heifer operates. “We’re validating that this project is worth while,” he says. “We’re great farmers, but now we’re convincing farmers all over the world that they’re business people, too.”