Happy Valentine's Day! However you spend today, there is a good chance chocolate will be accompanying you. This week, 58 million pounds of chocolate will be sold in the U.S., constituting $345 million in sales according to a CNN report (that's about five percent of chocolate sales for the year!).

Despite living a life surrounded by millions of pounds of chocolate sales, the chocolate creation process was a mystery to me until recently. I knew something called "cacao" or maybe "cocoa" grew on a tree or a bush somewhere, at some point sugar entered the equation, and more or less--voila! there's your chocolate.

Luckily, I had the opportunity to fill in the gaps of my woefully inadequate chocolate story. In January, I traveled to Bolivia to visit Heifer's project, Developing Food Systems for Small Farmer and Indigenous Families in the Bolivian Amazon. The project will support 2,783 families that are managing and harvesting wild cacao in the Bolivian jungle through training in natural resource management and climate change adaptation, resources like sheep and fish to diversify income and nutrition, and stronger links to local markets.

Tito and Dani Noe are, along with their parents, participants in the project. They help their parents harvest and process cacao in the village of San Jose del Cavitu, and the two of them helped me understand the cacao-to-chocolate journey better. 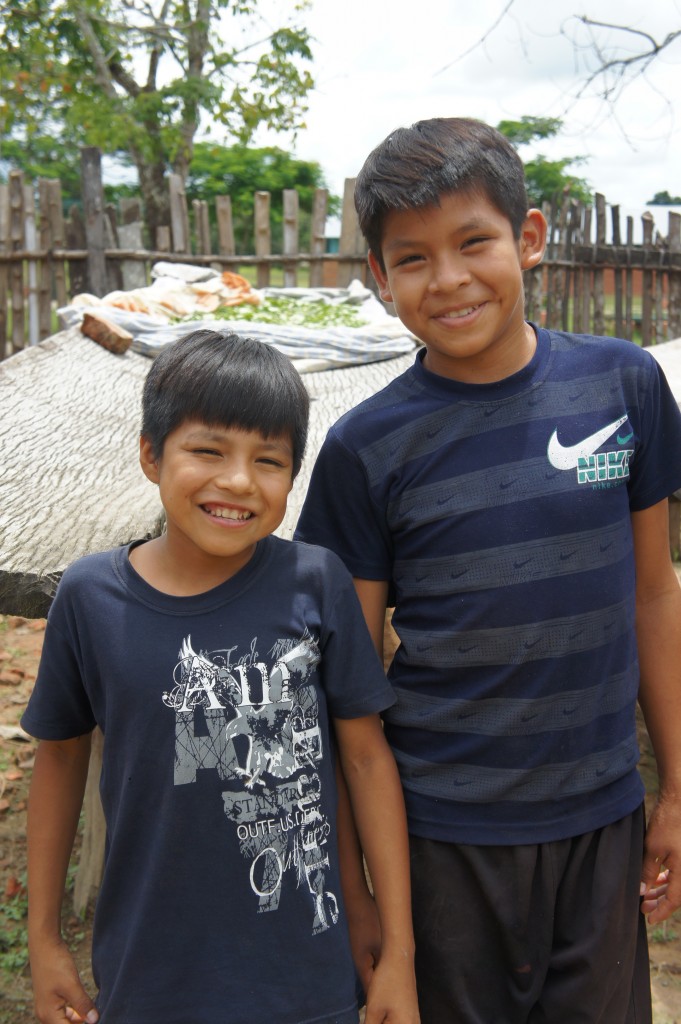 Dani and Tito Noe, in front of their home in San Jose del Cavitu, Bolivia. Photo by Jason Woods, courtesy of Heifer International.

First, of course, comes the harvest. Tito and Dani, who are 12 and 10 years old respectively, aren't allowed to help with the harvest yet. Although some kids in the village help their parents, Tito and Dani won't travel to the chocotal, or cacao forest, until they hit 16. The cacao harvest generally peaks in January, and during that time, most of the community will regularly visit the chocotal, which is a 45-minute motorcycle ride (or long walk) away from the Noe house. 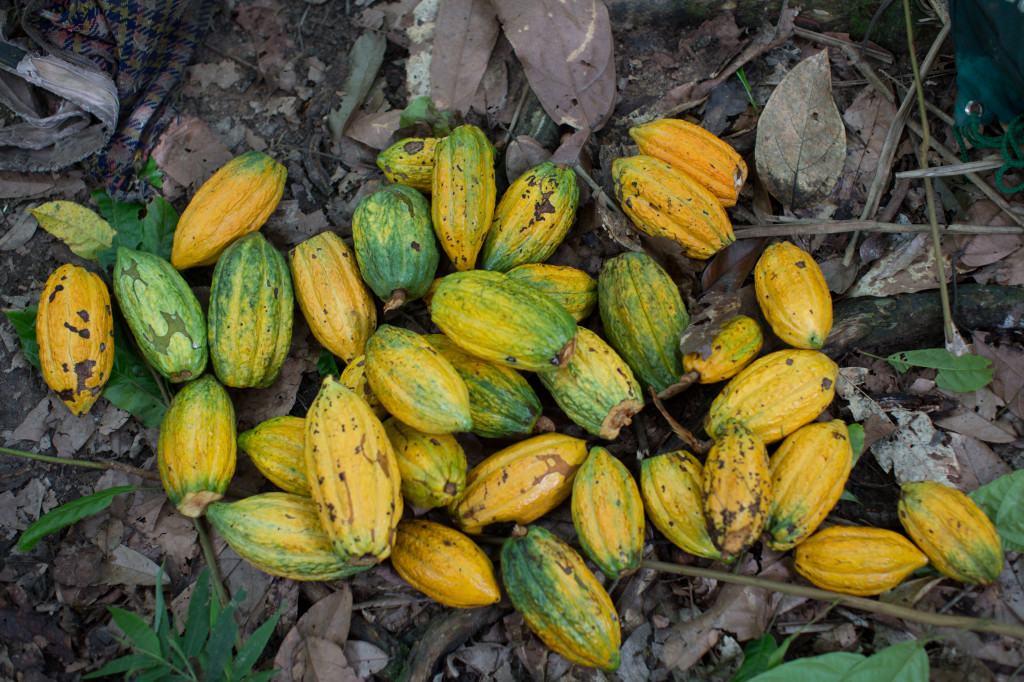 The cacao fruit itself is about the size of a large Nerf football. It starts out green and becomes yellow when ripe. The fruit also grows from any of the tree's branches as well as the tree trunk. When the cacao pod is chopped in half, it reveals dozens of seeds covered in a soft, white membrane. The white part is edible, sweet and tasty, although it doesn't taste much like the chocolate we know. And that makes sense, because chocolate comes from the seeds themselves. If you can't help yourself (or, like me, don't know any better) and chew the seeds up along with the fleshy white part, it turns purple in your mouth!

Harvesters often use a machete to collect the low-hanging fruit. For cacao fruits located higher in the tree, a long stick with a wire circle at the end is used. Once the fruits are collected, the seeds, complete with the white membrane, are extracted and poured in a container and taken back to the village. 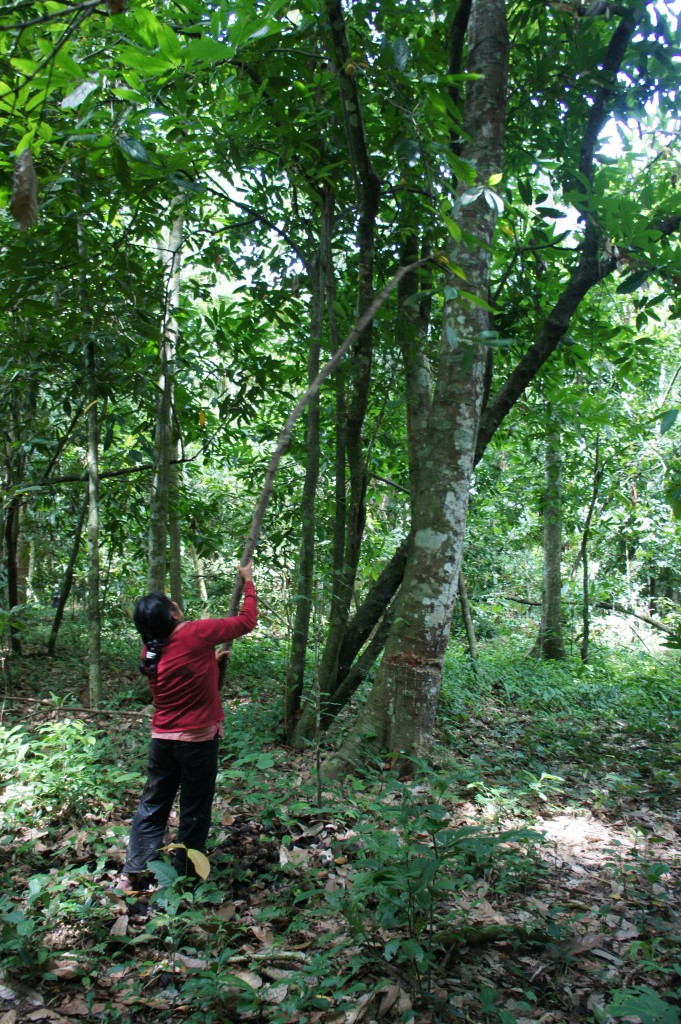 For the fruits found higher on the tree, many people use a tree branch with a wire circle to harvest the cacao. Photo by Jason Woods, courtesy of Heifer International. 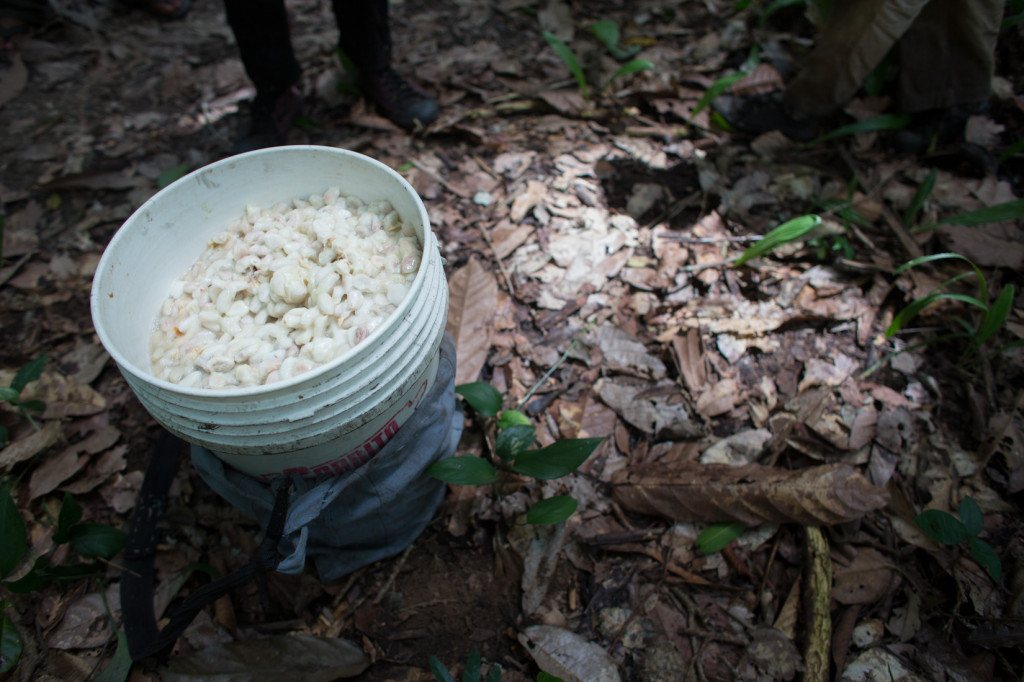 After the cacao pods are harvested, they are cut open to reveal seeds covered by a white, fleshy membrane. Photo by Dave Anderson, courtesy of Heifer International.

From there, the seeds are placed in a wooden box or arranged in a pile to ferment, which can take up to a week. During the fermentation, the white membrane is converted and removed, leaving only the seeds (or beans). 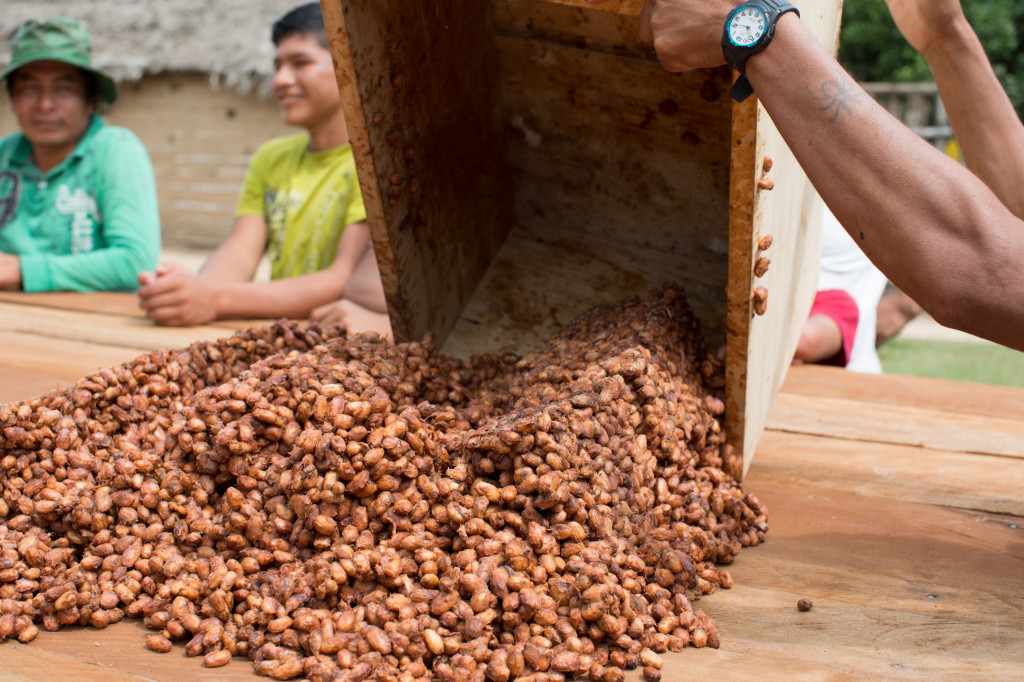 Recently fermented cacao is poured onto a table to be spread and dried. Photo by Dave Anderson, courtesy of Heifer International.

After fermentation, the seeds are spread out on a large, wooden table to dry. This is where Dani and Tito really start to help their folks out. In Bolivia, January is "summer vacation," and the kids are available to help with processing the cacao. Tito told me that it usually takes about three days for the seeds to dry completely, and then he and Dani use the grinder to make a powder, which is turned into a big ball of chocolate paste. Then the Noe family is off to the market to sell the chocolate in nearby San Ignacio. 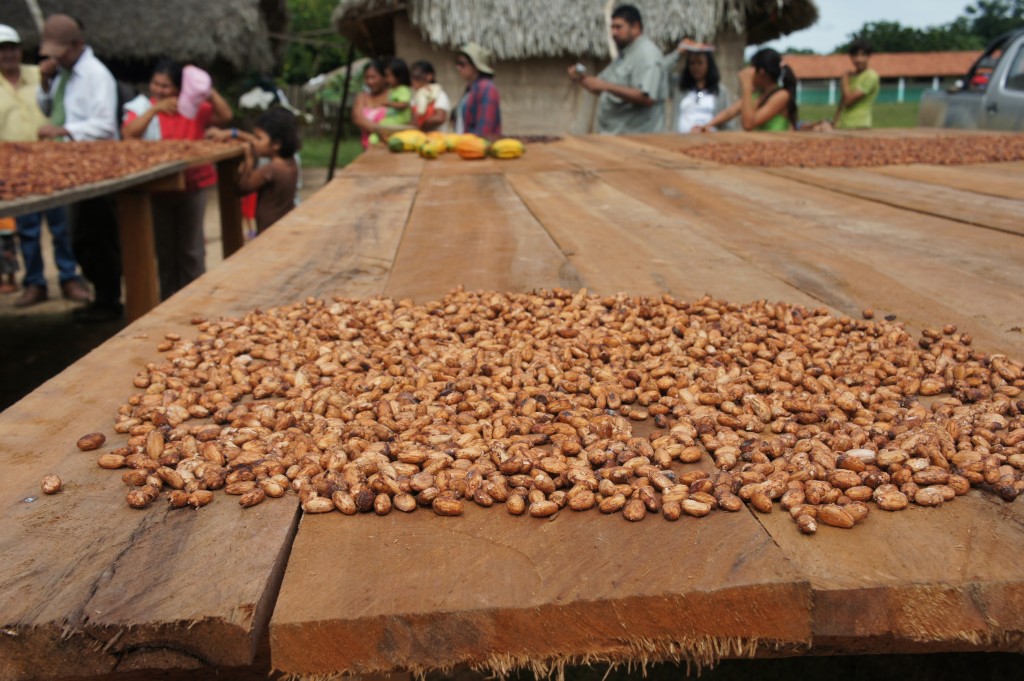 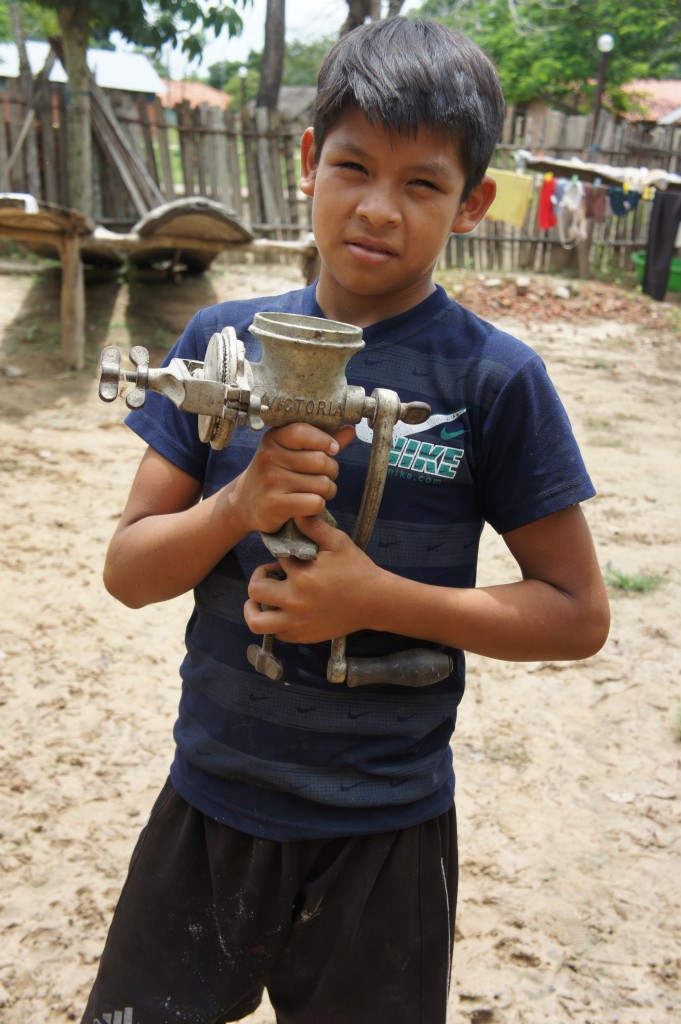 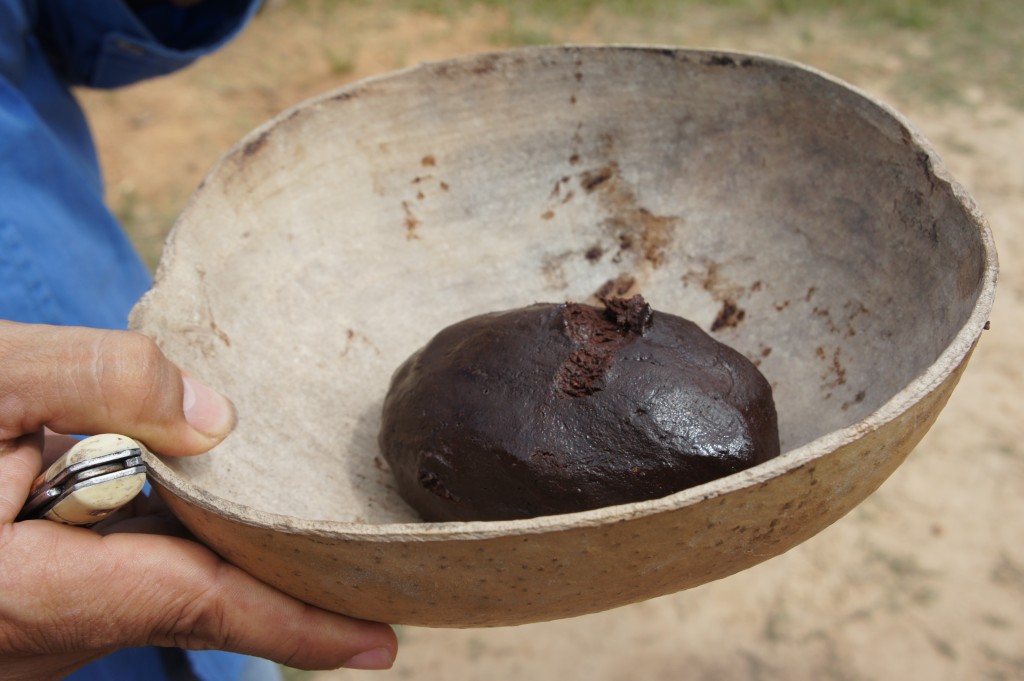 After the cacao is ground, it is turned into a paste. Photo by Jason Woods, courtesy of Heifer International.

This is only part of the process that leads to what we in the United States generally think of as chocolate. What is consumed here is usually processed more heavily, and many extra ingredients, like sugar and milk, are added along the way. The product the Noes sell and consume is primarily used to make a locally popular hot chocolate drink, but the drink is strong and bitter--more like coffee than a chocolate bar. 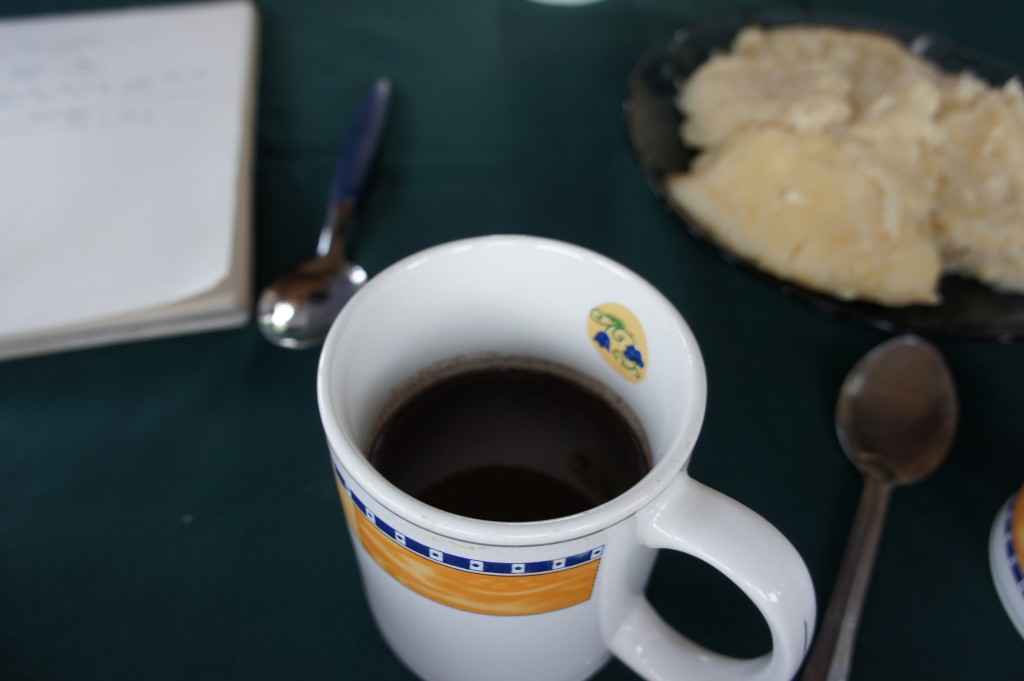 So, our mystery solved. Chocolate comes from a strange-looking, yellow, ridged fruit in the jungle. But it also comes from hard-working, rural families.

For the Noes and other families in the Bolivian Amazon, the chocolate they sell is an opportunity to put food on the table and potentially send their kids to a university. Both Tito and Dani want to attend college. Tito hopes to be a teacher in San Juan del Cavitu some day; Dani is still thinking and dreaming (although he says he's the best student in his class at school). But none of their seven older siblings have had the opportunity to attend university. With Heifer's support, the goal is to make sure families can send kids like Tito and Dani to school while making sure there is enough to eat on the table. And plenty of chocolate to drink, too. 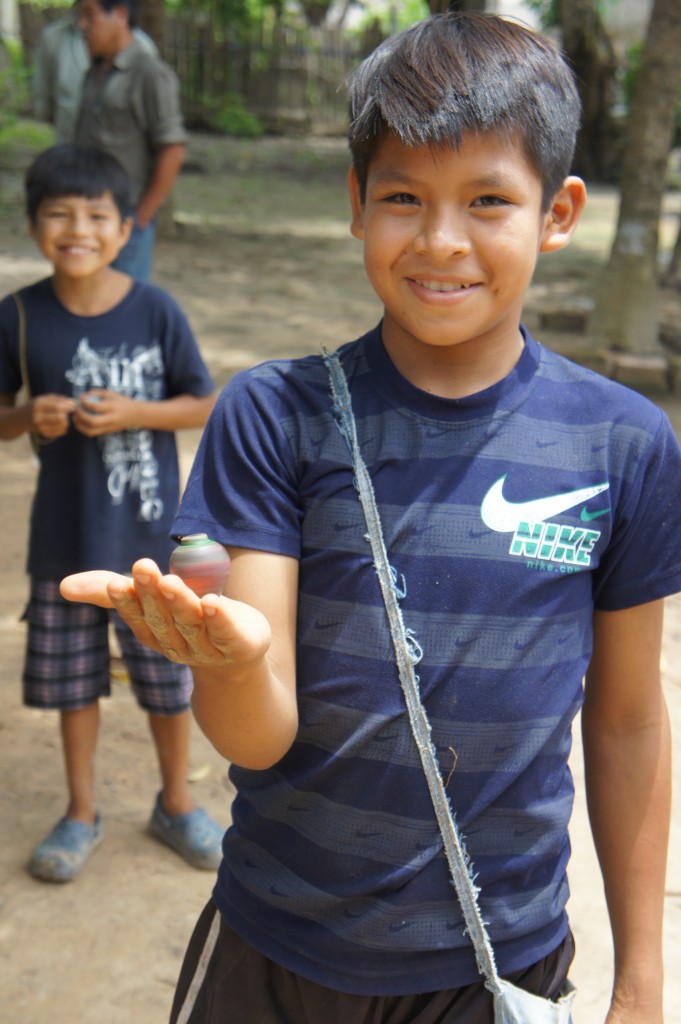 Tito (front) and Dani (back) Noe demonstrate how their tops work. Photo by Jason Woods, courtesy of Heifer International.