Mossammat Monira Begum (pictured above, right) has a smile that could light a room. As it turns out, that smile is helping transform an entire village.

Monira, 38, lives with her husband Mohammed Abdul Hakim in Madhabpur Village in northwest Bangladesh. Until three years ago, the two struggled to find consistent work and to eat two meals a day.

When Heifer first came to her village in 2011, people were immensely skeptical of the idea that an organization would give such valuable animals to farmers and ask for little in return. But Monira knew otherwise. She gathered a group of 24 other women to join a self help group to begin pooling and saving their money so they would have the means to then provide for the gift of a cow that was to come later. All they needed was 10 taka per week (about 12 cents), or a handful of uncooked rice, to contribute. 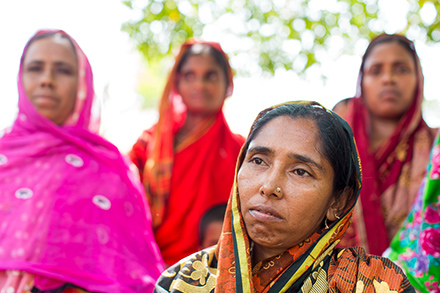 Monira Begum reflects on how much life has changed in the last three years. Photo by Dave Anderson.

"I knew the group would give me economic stability," Monira told me. "I thought maybe it would help the entire community, too." It wasn't easy, she said. Rumors swirled in her village and women dropped out of the group. But Mnonira went door-to-door telling people to watch her. If she didn't succeed, then they could tell her she was wrong.

Her efforts were able to get 17 women to re-join the group. They all received various trainings, including self-help group management where they learned how to open and operate a joint savings account. By saving what they could: selling eggs from their chickens, selling vegetables from their gardens, or the handfuls of rice, each woman was able to contribute the agreed-upon amount.

Three years later, each of those 17 women has about 3,100 taka or nearly $1,000 in the bank account and are making plenty of money to invest in land, more animals and other enterprises.

While Monira is proud of her own successes: offering sewing and tailoring classes for young women in the village at 1,200 taka a class, buying and selling her cows for a hefty return ($900 for one cow), investing in large plots of land so she can grow and sell more rice and vegetables, and ensuring she has enough so that her youngest son can finish higher secondary school, she says she's proudest of what the community has achieved together.

"I've seen a big change, especially among my neighbors. We've established and strengthend ourselves," she said.

Monira accompanied me on the other interviews throughout the village. Each woman was overjoyed to see her, and often credited her with their successes.

"I got a lot of support from Monira," said Rehana Begum, 45, another woman in the group. "She showed me we should help our community, and when I help others, I feel good."

Help support a women's self help group like Monira's today.