The saying goes that everyone has a story to tell. And while that saying may be true, most of us never sit down in front of a keyboard to put it in print.

Global development heavy hitter Scott Jackson is an exception. Jackson is president and CEO of Global Impact, a leading fundraiser in international philanthropy. He’s also a husband and father. Still, he made space in his schedule to invest the time and work required to put his personal history of challenges and victories on paper. In Take Me With You: One Person’s Journey to Find the Charity Within, Jackson shares vulnerable memories of a childhood bruised by domestic abuse, racism and poverty that could easily spell the defeat of many of us. And he shows how his own experiences fueled an ambitious career that’s taken him around the world help children overcome their own challenges.

Jackson’s earnestness infuses the entire book, from the very first paragraph of the introduction:

I wanted to share my story because it has influenced my own commitment to help others realize their full potential and contribute to a better, safer world. My goal is to offer a message of hope and encourage you to embark on your own journey to serve others and spark positive change – in whatever way you can – because every life matters and there are so many in need around the globe. Scott Jackson, Global Impact President and CEO

Slick this book is not. Although it’s as professionally printed and bound as any New York Times bestseller, Jackson’s autobiography retains a homemade quality that dovetails perfectly with the book’s do-it-yourself approach to saving the world.

Jackson’s story is an unexpected one. A peek at the book’s back cover flap reveals a middle-aged white man in a suit, an ordinary looking man whose unremarkable appearance belies a remarkable past teeming with violence and suffering that begins before he’s born and doesn’t let up until he escapes his abusive father by running away one night during a snowstorm. The drama unfolds before backdrops of rural Kansas and Oregon, offering colorful glimpses at a rural childhood, interesting asides for suburbanites who never kept chickens or picked strawberries for extra cash. 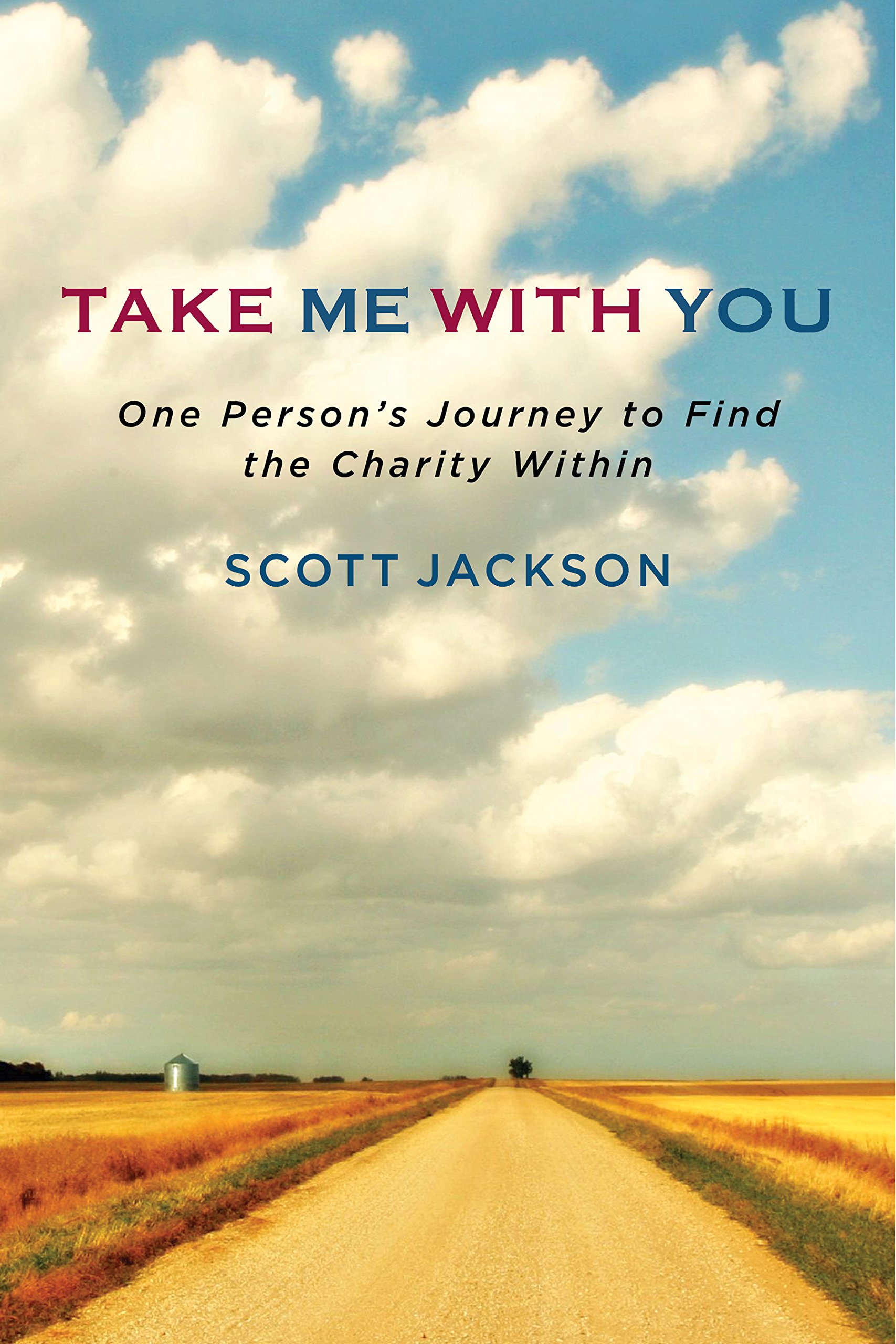 Take Me With You: One Person's Journey to Find the Charity Within By Scott Jackson Hardcover, $26.95; 244 pages

The book is many things: a coming-of-age story, a how-to guide for do-gooders and an homage to Jackson’s mother and stepfather. Jackson shares his gratitude for his mother, who found the strength to escape an abusive husband in a time and place where divorce was rare and stigmatized. Jackson’s mom continued to buck expectations by marrying a black man and adopting two black children, whom she and her second husband raised in a hand-built log cabin in the woods in Washington state.

The narrative arc of the book is compelling, and stepping out of the story at the end of each chapter to learn about the 17 Global Goals for Sustainable Development is a hard sell. The United Nations General Assembly set the goals “to end poverty, hunger and inequality, take action on climate change and the environment, improve access to health and education, build strong institutions and partnerships, and more.” Jackson explores the 17 goals in mini-chapters dropped in between the chapters of his book, with the goal of drawing connections between the Global Goals and his own life and work. It’s a clever gimmick, but taking readers on such abrupt shifts from left brain to right brain stalls out momentum. Here’s a trick: try skipping over these more fact-heavy bits and going back to read them once you’ve read the narrative portion of the book.

But make sure you go back and read anything you skip over! The “Global Connection” chapters are a fantastic resource for anyone who wants to understand what these Global Goals mean without having to wade through all the jargon and acronyms that can make global development lingo inaccessible.

Jackson tips his hat to a number of organizations doing good work around the globe, and Heifer International is proud to be included here for our focus on sustainability, environmental preservation and supporting small-scale farmers and business owners.