Before I visited Oaxaca, I knew about mezcal. I liked mezcal. But when I left Oaxaca, I became a mezcal evangelist. Everyone I know is now either in love with mezcal as much as I am or so very sick of hearing about it.

Mezcal still isn’t as well-known in the United States as other spirits, like whiskey or its cousin tequila. But it’s gaining popularity quickly. 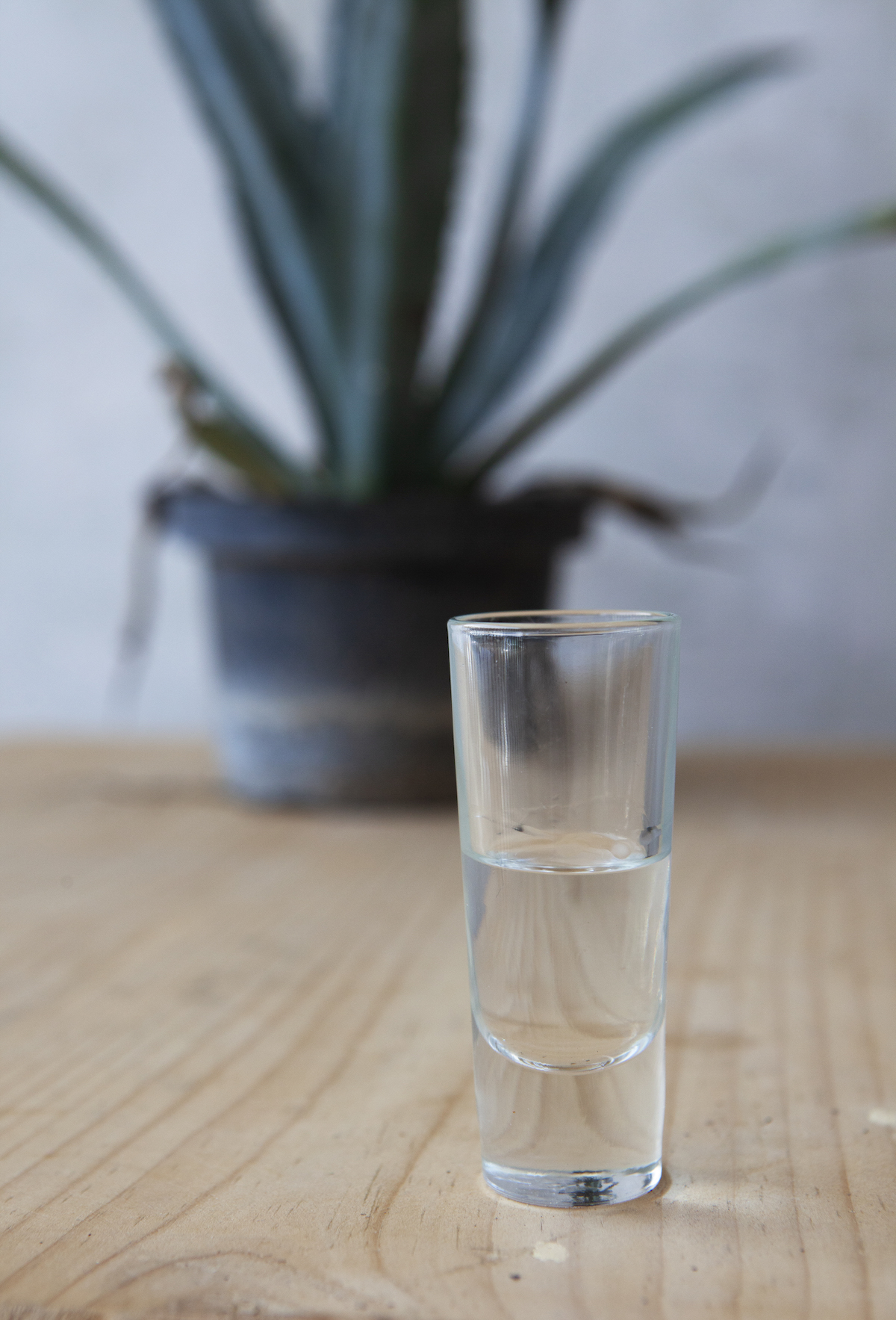 Mezcal in front of an agave plant. Photo by Russell Powell.

The original mezcal evangelist is Ron Cooper, a visual artist who visited Oaxaca in the 1970s and fell in love the culture, which is entwined with the drink. In 1995, he created his own brand of mezcal, Del Maguey, to share his passion for mezcal with a wider audience. And Cooper’s been successful at getting the message out—a lot of the reason mezcal has gained notoriety in the U.S. is because of Del Maguey.

Del Maguey and parent company Pernod Ricard Mexico obviously want to sell great mezcal. But they also want to make sure their producers are living good lives. So Pernod Ricard and Heifer Mexico are partnering together in the town of Santa Ana del Rio to ensure families making mezcal earn a living wage. Soon, they project will be replicated in other Oaxacan towns.

I enjoy how complex and unique the flavors of each batch of a well-made mezcal can be. To me, mezcal tastes more natural than other drinks. If you’re interested in trying mezcal but don’t know where to start, that’s OK. We’ll ease you into it.

In Mexico, the word mezcaltraditionally meant any alcoholic drink made from the agave plant. So technically speaking, tequila was considered a type of mezcal. But today, the word’s meaning is changing to mean a spirit made in a specific way from a variety of types of agave (or maguey). According to the Mexican government, mezcal has to come from a particular denomination of origin—one of nine states, including Oaxaca, where the vast majority comes from.

So how is it made?

Rural towns in the hills of Oaxaca and surrounding states have been making mezcal in the same way for generations. First, the agave plants—overgrown succulents that can weigh as much as 200 pounds—are uprooted, and the spiny leaves are cut off, leaving the agave hearts, or piñas. The agave hearts are loaded in a truck and taken to an open-air palenque, or distillery. 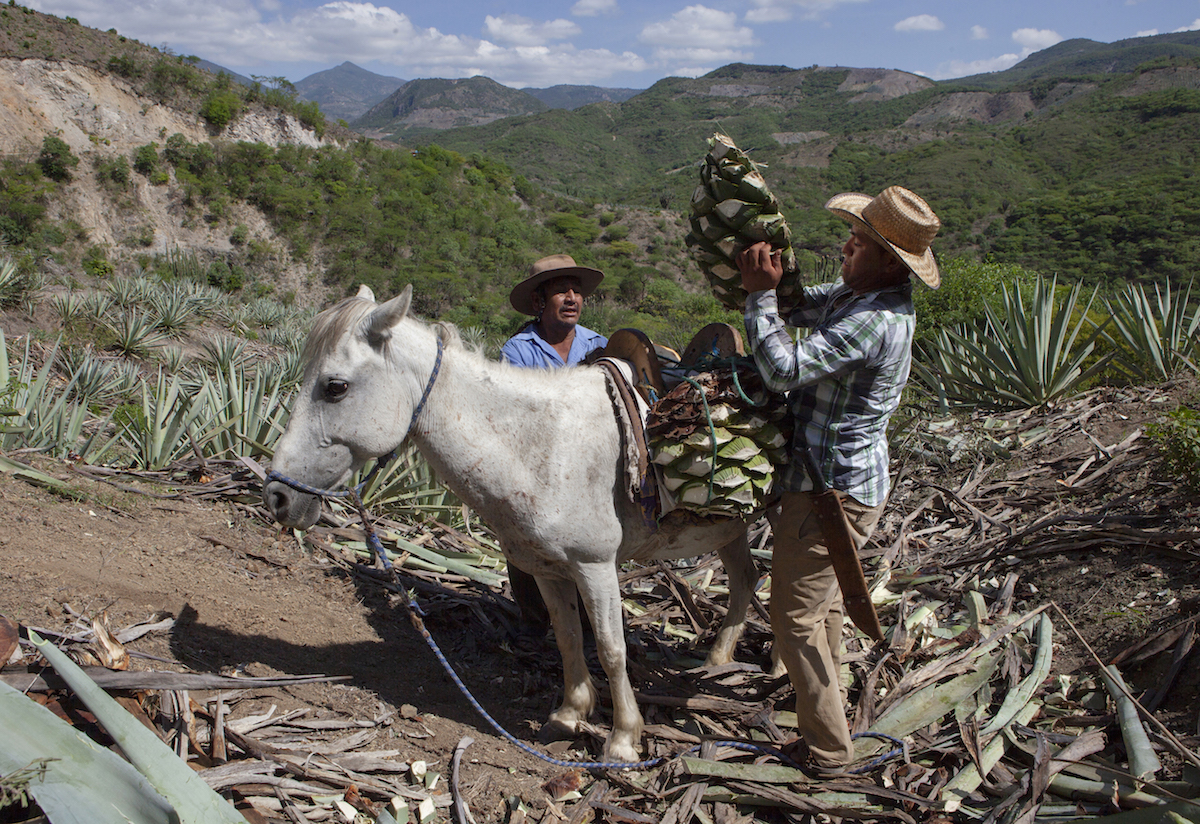 Harvested agave hearts are loaded onto a donkey. Photo by Russell Powell.

Once there, the piñas are put into in an earthen pit lined with large stones atop a smoky, smoldering fires. The pit will be covered with a natural tarp and dirt, then the heated stones will cook the piña pieces for about eight days. 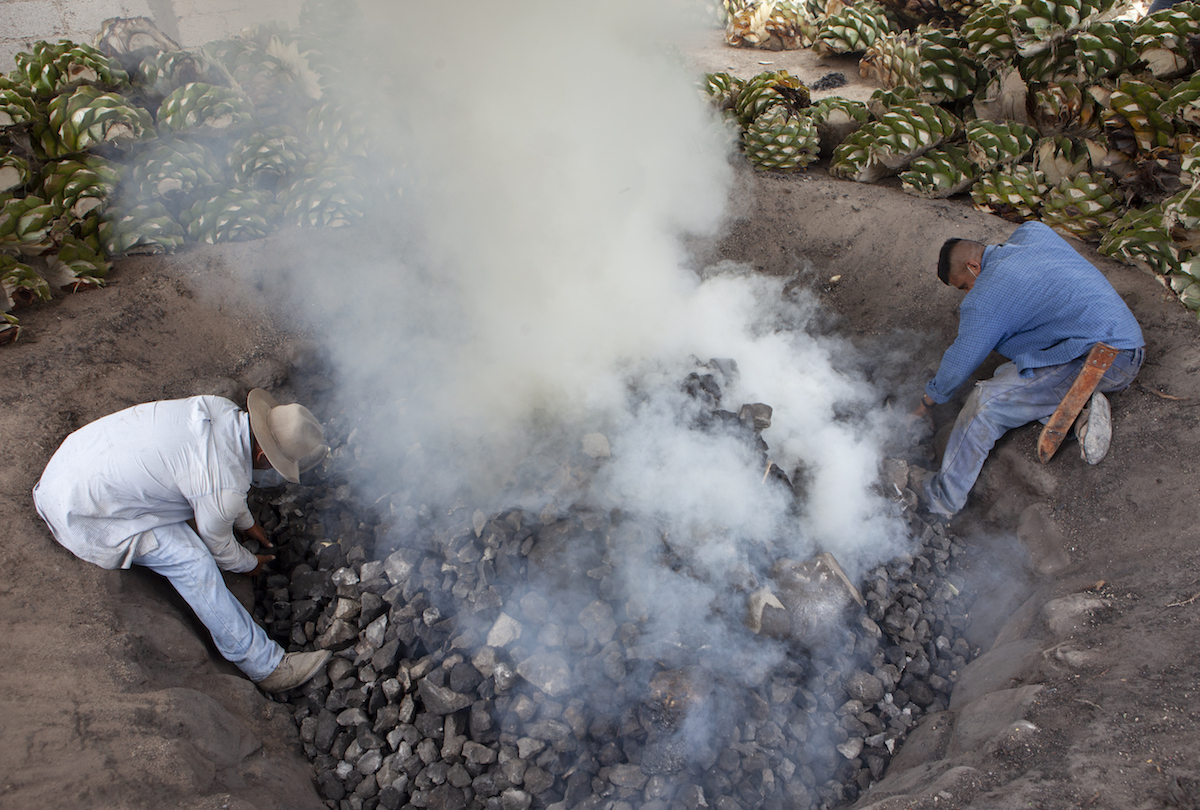 After the pit is uncovered, a donkey is used to roll a tauna, a thick, heavy stone, over the cooked agave to aid the fermentation process. Then, after a week or two of fermentation, the mezcal is distilled twice before it’s ready to drink. 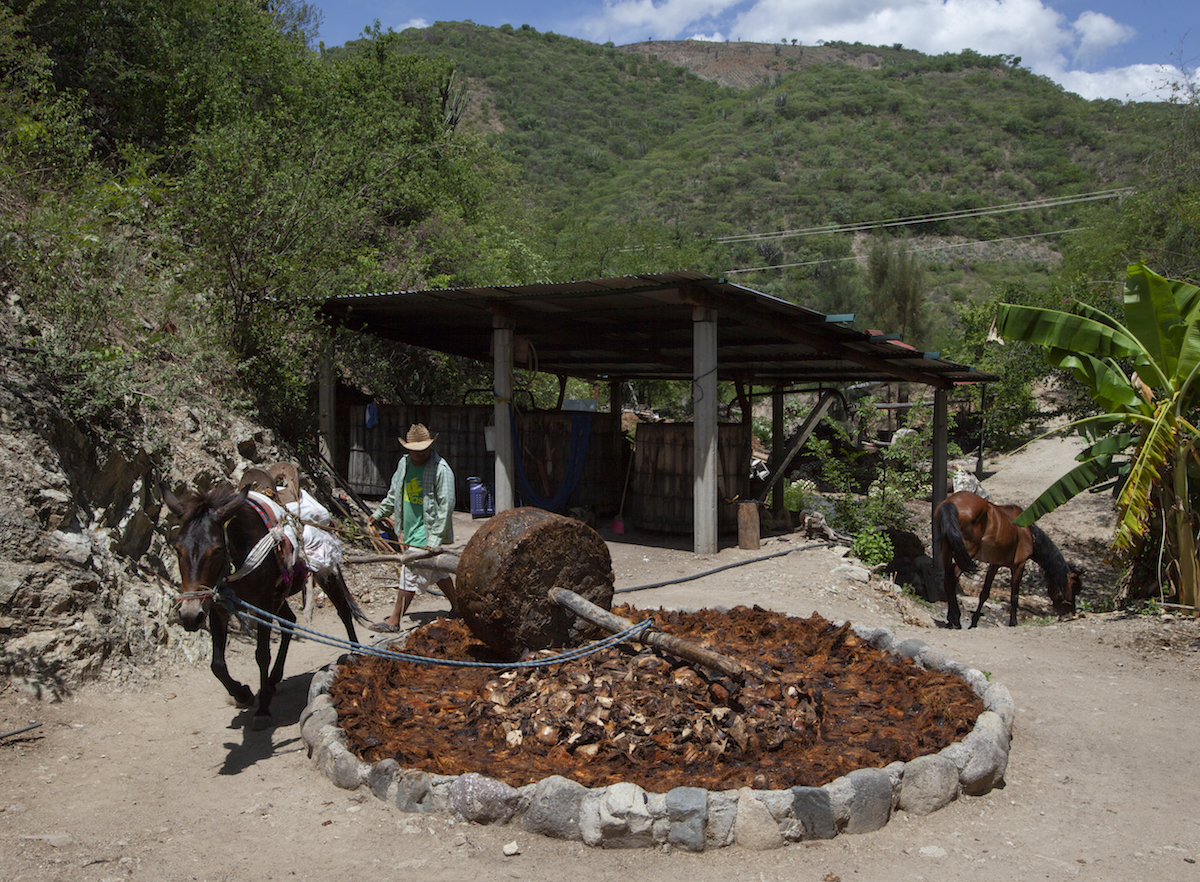 Mezcaleros will tell you that every part of the process greatly affects the end product, and each mezcal is unique.

What do all these hard-to-pronounce words on the bottle mean?

Mezcal is a spirit made from fermented agave plants, like tequila. But where tequila is only made from blue agave plants, mezcal can be produced from about 30 varieties of agave. You’ll find at least one of these words on your mezcal bottle.

The most common is espadin, which means “sword” in Spanish because the plant is particularly pointy. Espadin is one of the few domesticated varieties, and it takes seven years to grow for harvest. I find it to be a little rougher and smokier than other varieties, but it’s a good base for trying mezcal, and it’s great for mixed drinks. 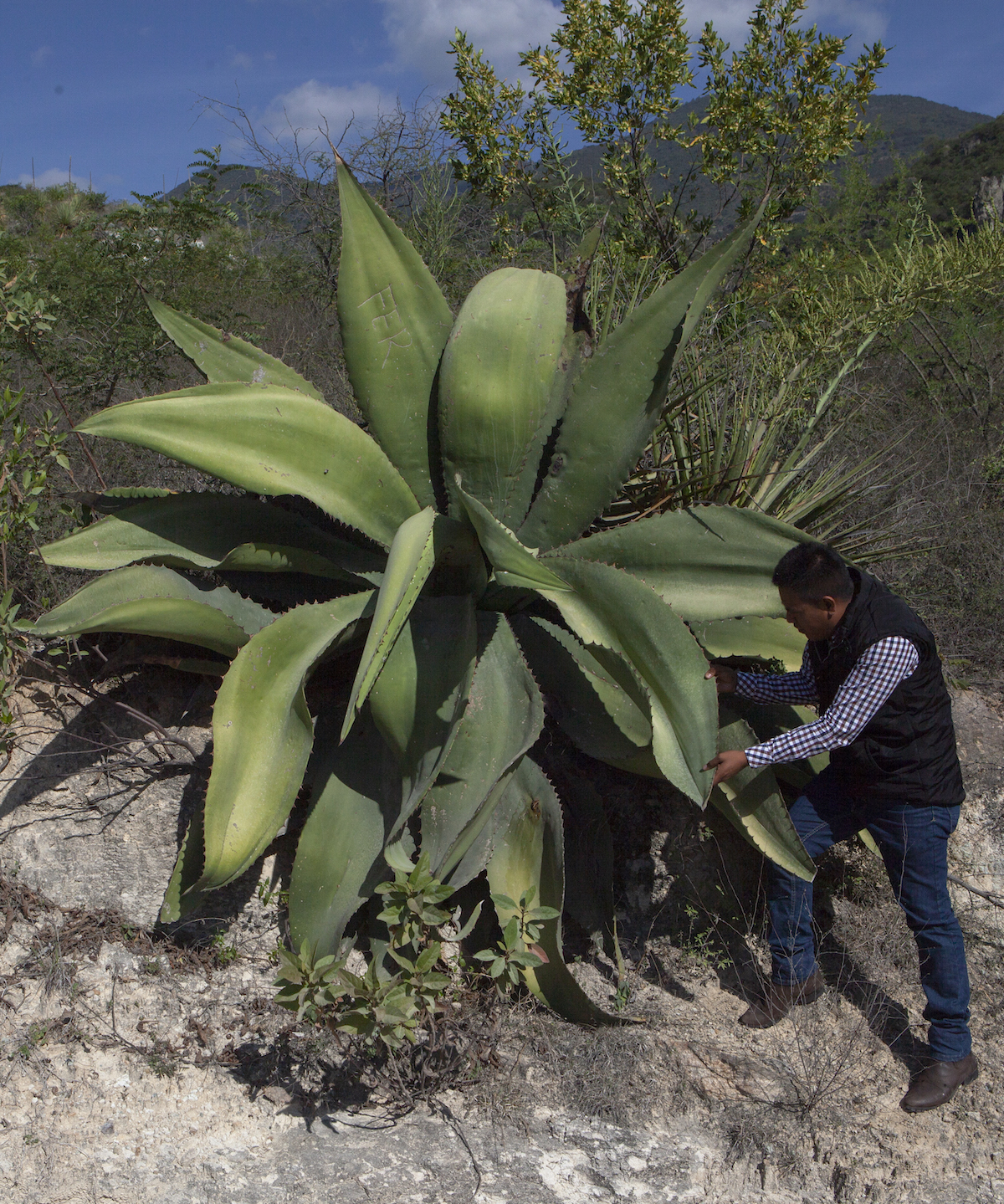 Most other varieties are wild agave plants. They’re rarer, harder to harvest, and they take much longer to mature. Wild agave mezcal prices reflect that. The largest variety of wild agave around Santa Ana, tepeztate, needs 25 years of growth before it can be cut and fermented. The other common wild agave plants found in Santa Ana, tobala and jabali, take 12-15 and 18-20 years respectively to harvest. My favorite mezcal is an ensemble, a mixture of those three wild agaves.

You also might see the words joven, reposado or anejo on your bottle. Joven means “young” and is less than two months old when bottled. Reposado is 2-12 months old, and anejo is at least a year. Reposado and anejo sound fancier, but I think joven has the best taste.

How do I drink it?

Del Maguey’s trademarked phrase is “sip it, don’t shoot it.” That’s a good place to start. If you can get your hands on the traditional clay copita, drink it from that. A martini glass or saki cup will also do. Those cups help emphasize the flavors and smell of the mezcal.

Maybe the best thing about drinking mezcal in Oaxaca is that it’s almost mandatory that you share it with a friend or family member or maybe someone you just met. It’s a great complement for pleasant, meandering conversations.

And if you’d rather try mezcal in a cocktail instead of straight, try one of these recipes from Del Maguey.