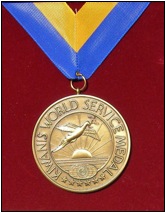 Earlier today, Heifer was recognized for our work to end hunger and poverty and protect the planet by the 600,000-member Kiwanis International family, with the presentation of Kiwanis' highest honor – the 2012 World Service Medal.

The medal, presented to Heifer President and CEO Pierre Ferrari by Kiwanis International President Alan Penn at the Kiwanis annual convention in New Orleans, also came with a $10,000 grant to the organization.

"There is a proverb that reads, 'Give a man a fish and he won't starve for a day. Teach a man how to fish, and he won't starve for his entire life,'" said Penn in announcing the award. Since 1944, Heifer has provided livestock and Earth-friendly agricultural training to families who struggle daily to survive. To date, we have helped more than 15 million families  in more than 125 countries, including the United States, become more self-reliant.

"I had the privilege of seeing the work of Heifer International first-hand as the son of missionaries who managed El Sembrador, a school for orphan children located on a farm in Honduras. Heifer International provided calves for the farm to improve the herd of livestock," said Penn. "Their amazing work affected me deeply and has stayed with me all these years."

Many Kiwanis organizations around the world have contributed to or partnered with Heifer International, "so each and every Kiwanis family member has been part of the amazing transformation that has led 80 million people from poverty to prosperity," said Ferrari.

"We all have cause to be very proud."

As an organization dedicated to service, Kiwanis International promotes the ideals of service not only among its members, but also among young people and the public at large. The Kiwanis International Board of Trustees established the Kiwanis World Service Medal in 1985 to advance this goal by recognizing individuals and organizations that devote a significant part of their lives to meeting the needs of others.

"We are honored to be in such august company as previous winners, but we must never forget that every day, thousands of children die needlessly around the world, from treatable diseases, from correctable situations," said Ferrari. "Kiwanis and Heifer International are both proven solutions to these problems, and we deeply appreciate this honor, but there is work yet to do and we are delighted to be pursuing those solutions with you."