In January Heifer launched its dream project for Nepal, Strengthening Livestock Value Chain (SLVC). Its goals are to increase meat and milk production to substitute current imports and create a unique value chain for meat and milk that incorporates smallholder farmers not only in the production phase but also in marketing it. But there was a glitch. Over the years degradation of genetic merit in goats resulted in lower levels of productivity. In layman’s terms, they had fewer babies who did not grow as well and farmers could not sell them for good prices.

Farmers of Ladavir in the Sindhuli district in eastern foothills of Nepal are a part of a unique classroom under the Community Initiative for Genetic Improvement in Goats (CIGIG). Here they learn about how to improve production of goats through selective breeding. These farmers are not new to rearing goats but what they learn in this classroom will teach them to do so in a more scientific way through observation and intervention. To put it simply, it’s the Mendel’s Law in action. A pool of healthy genetically superior does and bucks will be produced by the end of the project and will be marketed across communities around the country to in-turn increase their production. Ladavir will be a training ground and resource village for genetically superior high productivity goats.

Heifer’s work around the world is not just limited giving animals and agricultural inputs if farmers but also extends to doing what needs to be done to bridge the gaps between the present that the future that Heifer envisioned together with the families it works with. CIGIG is one such initiative. 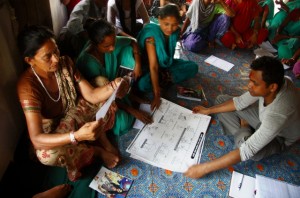