This Friday, October 16, is World Food Day–a time to day to raise awareness and encourage action to end food insecurity around the world. Read on to learn about Jaya Durga Self-Help Group–a powerful and determined group of women who found a way to bring a market and build a road to their small village.

Parroha village is in Nepal’s Rupandehi district. The women of Jaya Durga Self-Help Group (SHG) proudly welcome visitors to the vegetable collection center they built two years ago with support from the District Development Committee (DDC). Once a week, nearly 50 farmers from the village bring their produce to this center, and local traders and consumers come to buy in bulk. Every week, vegetables worth NPR 200,000, or about $2,000, are sold at the center. By bringing the market into the village, Jaya Durga SHG has helped promote commercial vegetable farming and strengthened livelihoods within the community. 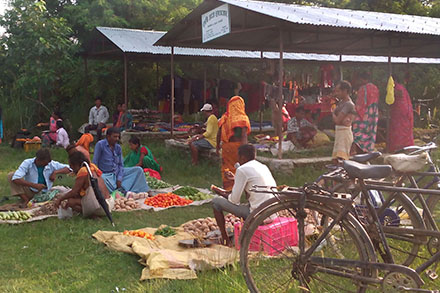 Each week, farmers sell $2,000 worth of produce at the market in Parroha village.

The idea for the center was born at one of the group's monthly meetings. As Heifer project members, they each received training in vegetable production and NPR 400, or about $4, of a vegetable fund in early 2012. Since then, these families have scaled up their homestead vegetable production. They started selling their produce in Butwal, a big market near their village, but it became quite a hassle. Spending so much time and energy on travel limited the amount of vegetables a farmer could sell.

Sushila Chaudhary, a group member, says, "I had to wake up at 4 o’clock each day and travel to Butwal. I would roam around in the market with basket full of vegetables until all were sold. Transporting vegetables in large quantities was also difficult."

In order to make it easier for themselves and other farmers to sell their abundant crops, the group decided to enlist their neighbors to help them build a market closer to home. They gathered locally available resources, such as bamboo and reed, and built the first center. The roof leaked horribly after the first monsoon. That is when the group decided to request financial support from the DDC to construction a more permanent structure. Recognizing the women's determination to build a center that would greatly improve the development of not only Parroha village, but also the entire district of Rupandehi, the DDC gave them NPR 500,000, or about $5,000, for construction materials, and many in the community contributed free labor.

You can empower women to escape poverty and lead self-sufficient lives. 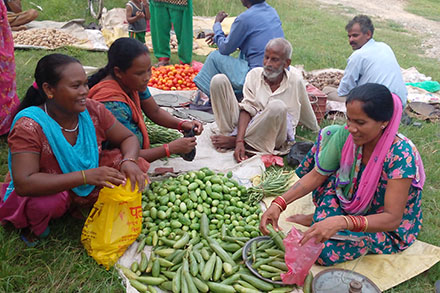 Farmers in Rupandehi district no longer have to travel far to sell their produce at market.

Today, Sushila has a very short commute. And she brings home NPR. 550,000, or about $5,300, a year from selling her vegetables. Before joining the Heifer project, her family of five depended solely on her husband's meager earnings as an electrician. With a clear understanding of their vegetable garden’s potential, her husband eventually stopped working as an electrician and started working beside his wife. They are just one example of many farming families who have increased their vegetable production and are enjoying more income since access to market has improved.

Sarada Chaudhary, also from Jaya Durga SHG, says, "Can you imagine? In our community women were once prohibited from riding bicycles. Now look what we are doing in this community. We have brought the market to our village. Initially we were so scared to join the group. Women were not used to having any money in their hands, so the idea of saving NPR 10 (about 10 cents) each month in a group fund seemed impossible. Now we earn more and save more." 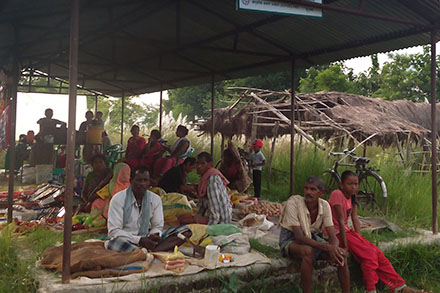 The women of Jaya Durga Self-Help Group petitioned district officials to help finance a permanent structure for the new market.

In addition to building the collection center, the Jaya Durga SHG knew a decent road into the village would be a tremendous benefit. When SHG members asked the Village Development Committee and DDC for help, they responded with construction materials worth NPR 42,000, or about $404. Now, with better road access, residents travel to and from market with ease, even during monsoon season.

The women of Jaya Durga SHG–30 members strong–are changing the face of their community. Once plagued with poverty and conservative mindset, thanks in large part to these empowered women, Parroha is growing to be a prosperous village with a vibrant economy. When social capital meets women’s empowerment, farmers can come up with creative solutions to overcome adverse situations and achieve prosperity. And Jaya Durga SHG is just one shining example of this success in Nepal.

Sixty-five percent of Nepal’s population are engaged in livestock and agriculture activities. Despite being an agricultural country, the people of Nepal rely greatly on neighbors in India and China for food and other products they cannot produce. With regular imports of grain, fruit, spices, petroleum for transportation and cooking, animal products, including meat and milk, and much more, Nepal has found itself in a precarious position.

Still recovering from two major earthquakes this past spring, political unrest erupted in this landlocked nation when a new constitution, seven years in the making, was adopted on September 20. Some groups are unhappy with the new constitution, which has led to riots and blocked trade routes, especially along the border with India in the southern part of the country. With little to no imports and their current supplies quickly dwindling, food and petroleum scarcity has become a critical issue and families are growing more anxious and desperate each day.

Heifer works with smallholder farmers in Nepal to bring them out of poverty and to a place of sustainability and resilience. Heifer helps empower women, and whole communities, to build social capital in some of the poorest and most marginalized communities. These groups of famers are creating strong rural economies and contributing to a national economy that is moving toward self-reliance and self-sufficiency.