You may think you love coffee, but prepare your devotion to be lapped about a thousand times while reading The Monk of Mokha, the true story of a young man who risked life and limb for the sake of bringing coffee from his homeland to the world.

Part coming-of-age story, part education on the entire coffee production chain from tree to cup, and part nerve-rattling account of an escape from the turmoil of the Yemeni Civil War, The Monk of Mokha has something to offer most readers, though not all may be engrossed by every section. As any accurate account of real-life events must be, the plot is not a perfectly balanced structure but takes at times the start-and-stop, winding path that real life takes.

The winding path in question is that of our hero Mokhtar Alkhanshali. Son of Yemeni immigrants living in the roughest part of San Francisco, we find a whip-smart and charismatic person languishing as a doorman at 25, directionless and without resources to make a change. A devastating theft of his laptop, which he borrowed money to buy, dashed his hopes for college. Everything changes when he learns of coffee’s true origins in Yemen, and he is gripped with a desire to resurrect his homeland’s ancient art and bring the fruit of his war-torn homeland to the world, both for the sake of coffee and so that the everyone may think of something besides terrorism and drone strikes when they think of Yemen. He wears his hope quite literally in Dave Egger’s introduction, as Eggers relates that during one of his interviews with Mokhtar he was wearing a T shirt that read, “Make Coffee, Not War.” 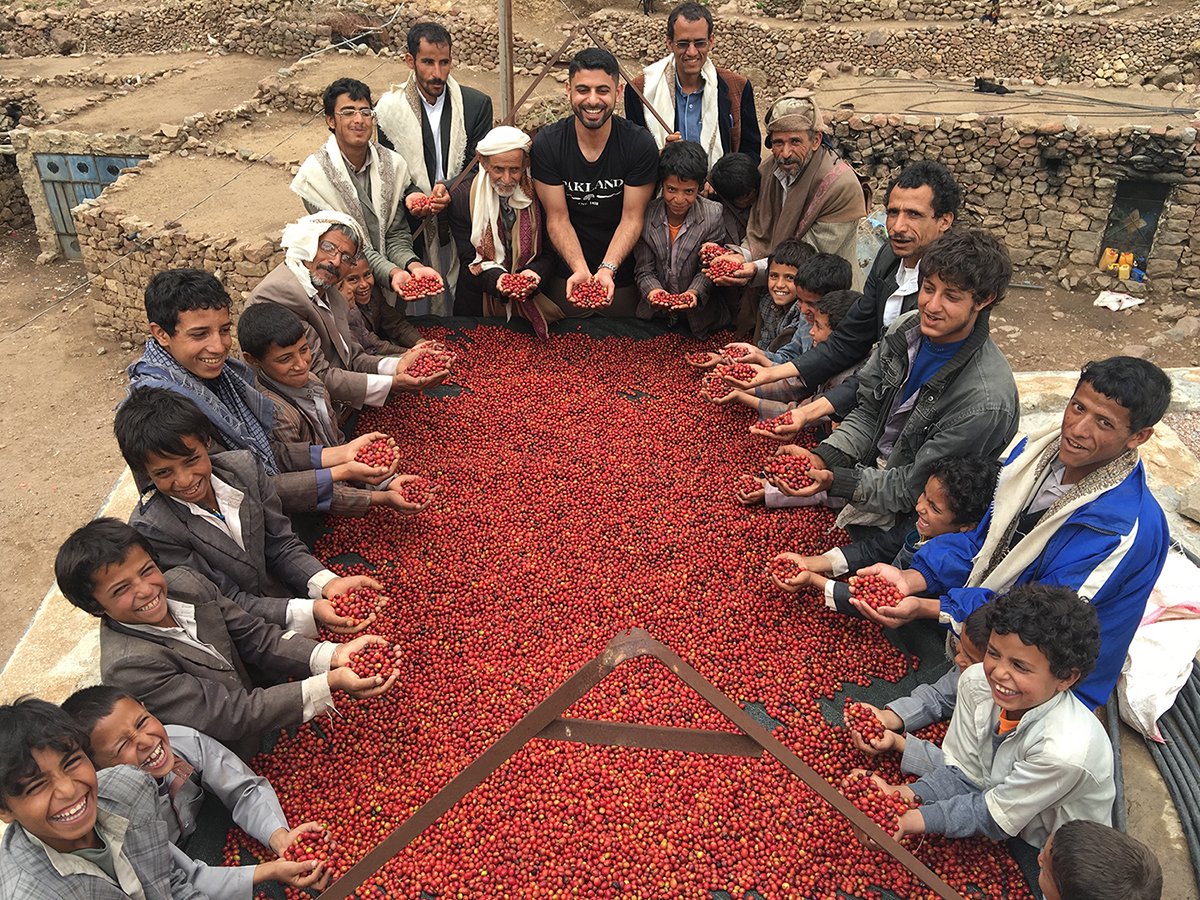 Mokhtar Alkhanshali (middle) laughing with a coffee-producing community around a drying bed.

As we follow Mokhtar’s journey, we learn as he learns. From the first legend of Khaldi, the Ethiopian shepherd who noticed his goats frolicking with extra energy after eating the fruit of a certain tree, we learn about the proliferation of coffee as we know it now around the globe thanks to a monk in Yemen’s port town Mokha, the complex processing of coffee, and finally the business of exporting and importing. As we follow Mokhtar’s personal development, we follow the development of coffee, both its history and the story of fruit to cup.

It makes for a lot of exposition as we get into the weeds of coffee production, but Eggers helps it go down easy by getting us to first care about our underdog hero Mokhtar as a human being, leading us to take interest in what he’s interested in and become educated as he is educated.

Mokhtar and Nuri laughed harder. They were pushing a taxi with an exposed propane tank while machine-gun fire rattled over their heads. They couldn’t run away. All their coffee was in the taxi. The Monk of Mokha, by Dave Eggers

Part of Mokhtar’s education includes learning the plight of the small coffee farmer. Though we may often groan at the expense of specialty coffee, he learns why it is, indeed, worth so much, and about the dark implications of cheaper prices for the consumer. “Even a four-dollar cup was miraculous, given how many people were involved, and how much individual human attention and expertise was lavished on the beans dissolved in that four-dollar cup. So much human attention and expertise, in fact, that even at four dollars a cup, chances were some person—or many people, or hundreds of people—along the line were being taken, underpaid, exploited.”

The difference he could make in poverty-stricken Yemeni farmers’ lives by getting them the tools and training to garner good prices for their product fueled Mokhtar’s passion for his project.

Passion he would need in spades, because getting high-quality coffee out of Yemen was a task of herculean proportions. At this point the story takes a hard turn from journey of personal discovery, entrepreneurship and coffee history into high-octane adventure. As Mokhtar’s goal grows closer to fruition and he finally has samples of high-quality coffee needed to convince international buyers to invest in Yemeni coffee, tensions in Yemen are growing, too, and finally boil over. He finds himself laughing at the extremes he is willing to push for his dream.

“Mokhtar and Nuri laughed harder. They were pushing a taxi with an exposed propane tank while machine-gun fire rattled over their heads. They couldn’t run away. All their coffee was in the taxi.”

This incident marks just the beginning of the harrowing escape from the country breaking out into civil war. By sheer virtue of his wits and charisma, he manages to finally get out of Yemen after many life-threatening detours—with the coffee!—on a skiff crossing the Red Sea, still not sure whether the man driving the boat is on the level or about to sell him to pirates. But, incredibly, he makes it. Today his Yemeni coffee is considered among the best in the world. 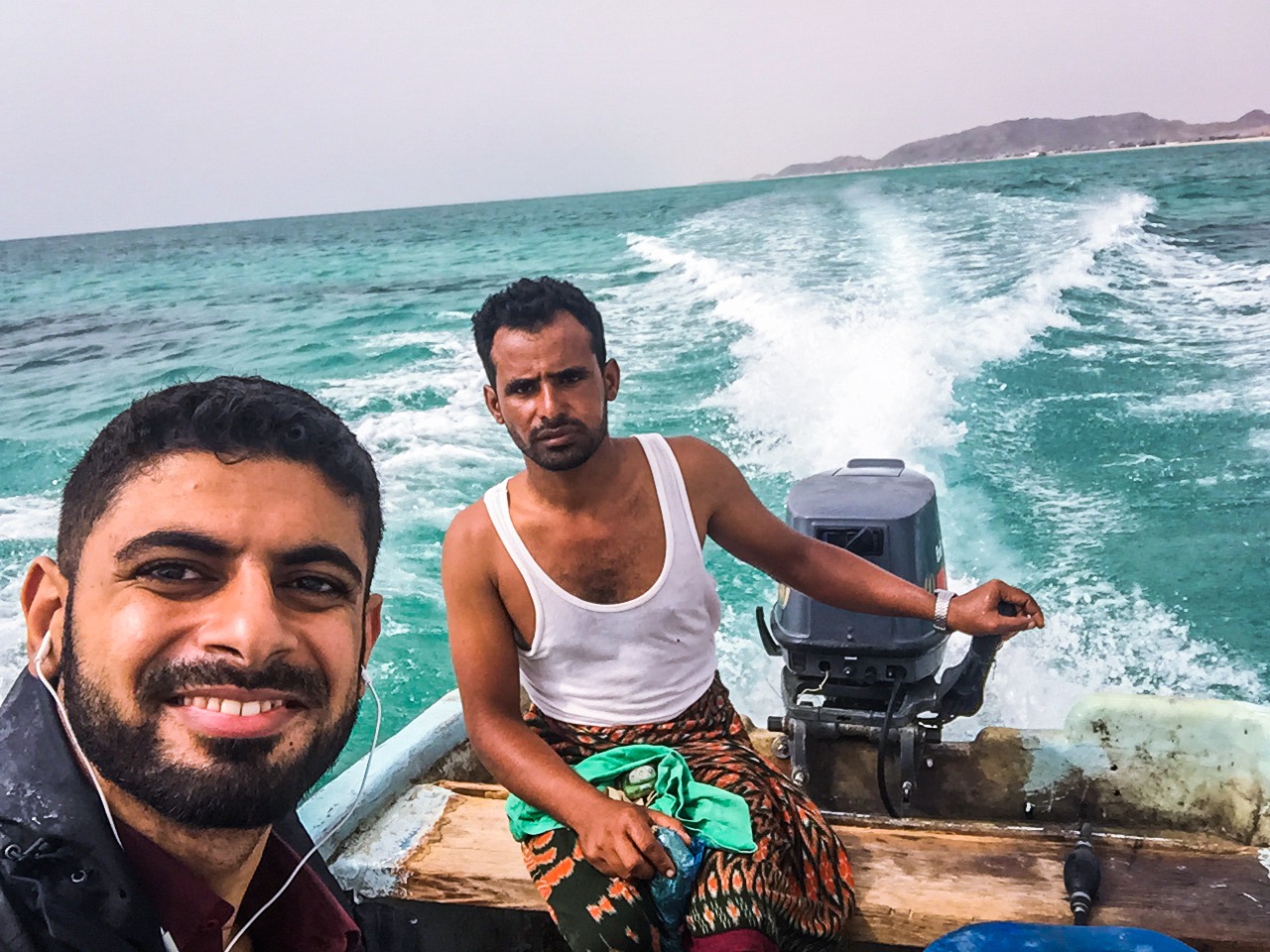 Mokhtar Alkhanshali snapped a selfie with the dubious captain of the skiff one which he escaped.

It’s an incredible example of the true American Dream, not to mention how just how far the fake-it-til-you-make-it strategy can take you. Whether you’re into adventure, inspiration, coffee, or the insights into one of the most misunderstood countries in the world, Yemen, The Monk of Mokha is well worth the read.