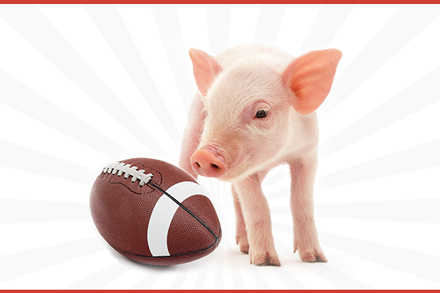 Are you team pig?

Are you team goat?

Everyone seems to be talking about those two animals lately in the run up to the Super Bowl. But how about we talk about a couple of animals that are helping poor farming families lift themselves out of poverty: goats and pigs.

Goats are amazing. They're incredibly versatile and can live in virtually any climate. They can supply up to a ton of milk a year, and here's a fun fact for ya: they discovered coffee beans! That's hard to top.

Pigs give goats a run for their money. A healthy sow can have up to 16 piglets compared to a goat's twins or triplets. They need very little room to thrive and the best part? Pigs are smarter than dogs.

So this year, before you sit down with your friends and family to snack on some amazing foods and watch the Super Bowl (or the commercials, we're not here to judge) we want you to do one thing for us: pick your team for the Heifer Bowl!

Unlike the Super Bowl, your vote actually affects the outcome of our game, and it can affect a struggling family a world away.

So, which are you? Team Goat? Team Pig? Take a minute to share your favorite over on Facebook. Check out the Heifer Facebook page where you'll be able to find our graphics to post on your wall.

And after you vote, take a minute to give a share of your favorite animal to someone in need.

We’ll announce the winner on Monday while one of those other animal teams are out doing victory laps.