When a New York Times reporter asked Wendell Berry whom he would like to write his life story, he shuddered. “A horrible thought. Nobody. As the only person who ever has lived my life, I know that most of it can never be documented, is beyond writing and beyond words.” So you can imagine the challenge documentary filmmaker Laura Dunn faced when she set out to create a film about Berry—a man famous for not owning a computer or a television, and harboring a general distrust of all things mediated by screens.

If this review piques your interest, here are a few favorites sure to turn you into a Wendell Berry devotee.

Dunn’s previous film, The Unforeseen, features a poem by Wendell Berry. She said she was surprised by how many people asked her about the poem’s author. While Berry was a transformational writer for Dunn, many people in her audiences had never heard of him. She decided her next film would focus on the writer and farmer, a man Michael Pollan credited as the instigator of the “national conversation around food and farming.”

Berry refused to appear on camera for the film, so Dunn had to reimagine her approach. The result is a powerful documentary that seeks to not so much look at Berry as with him. The Seer tries to capture through Berry’s eyes a vision of American agriculture as farming became more industrialized and many agricultural communities faded away.

The film joins archival photographs and film of Berry, on-camera interviews with Berry’s wife and daughter, and interviews with farmers in Berry’s native Kentucky with audio interviews Dunn conducted with Wendell Berry himself.  The resulting film is more powerful than a simple biopic. It carries forth Berry’s vision by returning our gaze to the land and its people—“the membership,” as Berry calls it, of his place.

The opening sequence is made up of short cuts of cityscapes, coalmines and factories as Berry reads a poem about a nightmare:

…I saw the last known landscape destroyed for the sake

of the objective, the soil bulldozed, the rock blasted.

Those who had wanted to go home would never get there

It is a poem about displacement and destruction, all in the name of economic progress. 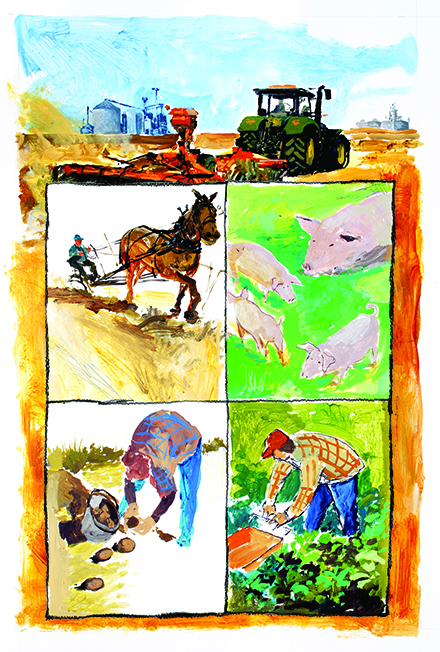 For more from Ragan on Wendell Berry, and beautiful illustrations by Michael Paraskevas, check out Wendell Berry's Reading List.

The film weaves pieces of Berry’s biography and writing life with interviews of farmers caught in economies of scale that violate the limits of both the land and its people. It is these interviews with farmers that I found the most moving part of the film.  Many are large scale, industrial farmers, of the sort that are viewed by many local food activists as “the enemy.” But in the interviews it becomes clear that these are people who love the land, who love farming, but are forced into destructive modes of survival by an economy that is stacked against them. They are victims of the kinds of farming policies that Berry has been advocated against from his earliest writing, especially in his 1977 book, The Unsettling of America.

A glimpse of hope in the film comes in a series of interviews with Steve Smith, a Kentucky farmer who was trapped in the same net as most farmers—growing more crops and yet going into more debt as prices continued to fall. But unlike many other farmers who responded by continuing to expand their acreage or quit farming altogether, Smith pursued a different way of doing things—intensive organic vegetable production. He was desperate for a solution so he tried it, becoming the first Community Supported Agriculture farmer in Kentucky. And though it isn’t mentioned in the film, he also came to know and eventually marry Wendell Berry’s daughter.

This mix of the tragic realities of country life, with hope that there is a different way, is something one finds throughout Berry’s poems, novels and essays. The Seer captures this, along with the other emotive force of Berry’s work. For myself and many others, reading Wendell Berry leaves us wanting to live more deeply, to embrace a better and more holistic life. He is the kind of writer who can change what you eat for breakfast, and maybe even the work you go to afterward.

When my wife and I finished watching the screening of The Seer our response wasn’t simply a nod, a sigh, or even a “Wow,” as it is with many films. Instead we started into a conversation about how to live in light of the truth and hope of Berry’s vision as offered in the film. “I only wanted to start a conversation,” Berry once said of his work. The Seer is a film that carries that conversation forward in a new way with new audiences.