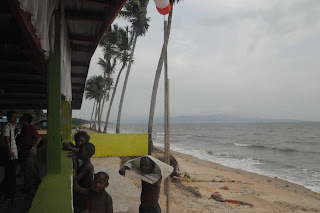 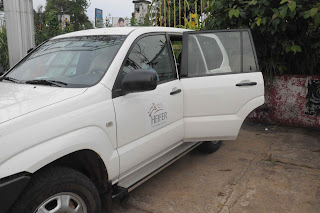 The weather always seems to affect the way I see locales. Our flight into Conakry, Guinea, was delayed about an hour as our big Air France jet from Paris circled, waiting for the rains to lift. The short (30 minutes) flight from Conakry to Freetown was uneventful, and the remains of the rain storm lay in puddles on the ground in Freetown when we arrived. While Elizabeth Bintliff, Heifer’s West Africa Area Director, commented on how much the airport had improved in the year since she had vsited, I thought it looked as if building or renovation had been started, then abandoned a decade ago. The gleaming new control tower stood in sharp contrast to the unfinished terminal buildings, with their rickety scaffolding and ripped blue tarps clinging to the unfinished concrete work, and all under scudding gray clouds.
Across the street from the airport, a shantytown of rundown shops and homes teemed with hundreds of people milling about, clearly with no place else to be or go. The drive to the hovercraft port from the airport couldn’t have been more than a mile and a half, but took some 20 minutes, as the driver gingerly negotiated the pock-marked road, avoiding the largest mud puddles left by the rain. The beach where the hovercraft “parked” would have been beautiful, had it not been for the ramshackle stick huts, and slapped-together dwellings where people lived without electricity or running water.
After a relatively smooth 30 minute ride on the hovercraft, we arrived at our final destination and home base for the next week or so: Freetown, Sierra Leone. It’s situated on the shoulder of a gently sloping mountain that angles down to the Atlantic Ocean. We had a brief welcome visit from the country director, Rashid Sesay and talked over plans for tomorrow: leave the hotel at 6 am and drive 5 hours to see projects in the field. Since we’ve been up for something like 36 hours now, I’ll end this post and hope to have more substantive observations later in the week.

Bill Fitzgerald is Heifer International's creative director. You can read his previous posts about project visits in Sierra Leone here.