Eating snails for meals has long been associated with certain tribes in Cameroon. In the South West region, snail meat is an important food for all occasions. Lean and low in cholesterol and fat, snail meat contains high levels of iron and carbohydrates. In some parts of Cameroon, snail meat is also recommended to nursing mothers and malnourished. Due to its affordability and availability all year round, it is often preferred over beef or pork.

A pilot project on improved snail farming was first launched in 1999 in the South West region by Heifer Cameroon, with funding from the British High Commission. The results of the project demonstrated that snail production has potential to increase household incomes.
A few years later Heifer Cameroon launched a full-scale snail program funded by Bothar, Ireland. The project was aimed at assisting farmers in improving nutrition by alleviating protein deficiency and scaling up production to match supply with demand. Project participants received training in snail farming techniques including construction of snails' habitat, nutrition, promotion of good health and reproduction.
"When you provide the right conditions, they [snails] actually do multiply and get ready for the market," explains Dr. Henry Njakoi, Heifer Cameroon Country Director. A snail matures at 5 months on the average and lays between 100-150 eggs annually. Under intensive and good farm management, hatchability is about 90% of 100-150 eggs.
Joseph Wamba, a member of a Heifer-supported group is gradually pulling his family out of poverty thanks to the Heifer-supported snail farming project. Joseph received 1500 adult snails alongside training in improved snail husbandry, agricultural inputs and equipment. Through his relentless efforts in snail farming and gardening, he saw his annual income more than double. 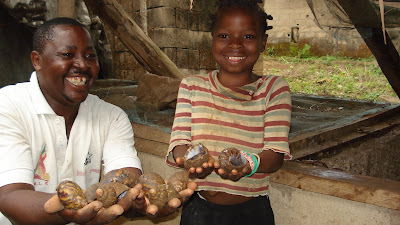 Joseph Wamba and his daughter, Meda Rachelle, aged 8
"This boosted our family nutrition. We supplemented our meals twice a week with the consumption of snails. Our health improved as food availability became a reality in our home thanks to this Heifer supported snail project." He admitted joyfully. Before joining Heifer, his household faced major livelihood challenges. "I spent my day hustling with passengers around the motor park to earn $2 daily. With this, I bought food for the family."
Today, with increased income and nutrition derived from this project, Joseph and his family are now living a healthy lifestyle. Beyond his home, he has also gained respect and recognition as head of the snail monitoring committee and chief of farm works in his group.