On a hot and humid day, I traveled to Nuwakot, a hill district tucked in the outskirts of Kathmandu Valley in Nepal. After a long and bumpy ride on the back of a motorbike, I arrived at Devi Rijal's home in Tupache Village. She invited me into her house with a smile that warmed me like the sun. Judging by her hospitality, you would never imagine the ordeal she has been through in the past month.

Devi and her children have been living in a small tin box that they constructed out of corrugated tin roofing sheets retrieved from the rubble of fallen houses after a 7.8-magnitude earthquake struck the small country April 25. It is their home now, providing shelter to their family and protecting them from the rain. Families in Tupache Village, Nuwakot District are moving out of tents and building similar temporary structures to protect themselves from the fast approaching monsoon.

"When the wind blows, it feels as if the whole structure will be torn apart. When it rains, water seeps inside, making everything damp and wet,” Devi said. “Last night it rained and the water started flowing inside, so this morning my neighbors and I started digging a canal around our homes to divert the rain water.” 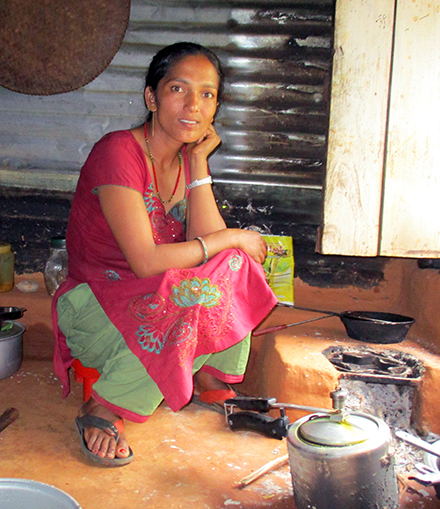 Devi and her family will live in this tin structure through Nepal's monsoon season.

Help support families like Devi’s as they rebuild their lives.

Devi and her neighbors have been in a Heifer self-help group (SHG) for two years. Heifer started its work with Tupache’s Village Development Committee (VDC) in 2012 with the objective of organizing smallholder farmers into SHGs to strengthen social capital and improve their livelihoods through livestock-based value chain enterprise development.

When the earthquake struck, Devi was feeding the chickens on her farm. Her two children—a son studying in second grade and a daughter in fourth grade—were inside the house. Luckily, they were able to run outside before the house collapsed on them. Her son sustained injuries to his head and arm from falling stones, but is recovering after medical care.

The first night after the quake, Devi remembers eating instant noodles without utensils or cooking stoves with the other women and children from the village. Most the village’s men were working in neighboring towns or abroad.

Devi's husband, a Nepalese solider, arrived from his camp in Banke the day after the disaster. "I was shocked, but very happy and relieved to see him,” Devi said. “He had made a long, almost impossible journey home so fast." Together they built the temporary shelter and retrieved some of their belongings from under the rubble, but he couldn’t stay for long as the Nepalese army was deployed for rescue and relief in affected areas.

Devi is grateful to have joined Heifer's group two years ago and the support they continue to provide each other. “All of us in our community know each other well. After the disaster all of us stayed and worked together. It really was a great relief to have people around me," Devi said.

Heifer organizes farming families into SHGs and together they receive trainings, technical support for agriculture and livestock and participate in group activities such as savings and credit, communal work and community development activities. These tight-knit networks have been of great relief to the earthquake victims as they find moral support in each other and have been able to recover faster from the disaster than other communities.

Devi and her SHG have been helping to rebuild her community. They worked to repair and restore the community’s drinking water supply. After the quake, her group also held an emergency group meeting in which they decided to loan out their group fund of $100 (NPR 10,000) to four families who had lost everything in the disaster. Any bit of assistance during these desperate times can prove to be transformational for the survivors. 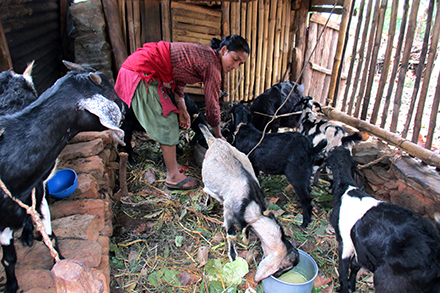 Devi hopes to soothe her goats' anxiety with a new goat shed.

Now, more than a month after the first quake hit Nepal, Devi and her community continue to slowly pick up the pieces and rebuild their lives from the rubble. With her children off to school, Devi is busy mending her kitchen garden and caring for her goats. She has built a temporary shelter for her goats after the shed was destroyed by a falling wall. One of her goats was buried under it. "After the first quake, I let go of them thinking they would be safer out in the open than inside their shed but they kept coming back to me,” Devi said. “Goats are just like us. They feel emotions and need company of others to feel safe."

Devi started raising goats only after she joined Heifer's group. She received three goats from Heifer along with capacity building and income generation trainings. Goat farming proved asa profitable investment for her family. Just last year Devi earned approximately $800 (NPR 80,000) selling goats. She has seven goats left with her. Her family used to be entirely dependent upon her husband's income but now her income alone is sufficient to support the family. She has been able to save her husband's earnings.

Even though Devi has recovered from the shock, her goats have not.

"The goats are under a lot of stress lately. They tend to get spooked even when the wind blows or by the slightest sound,” Devi said. “They have lost their appetite and have become frail." Devi has been regularly consulting with Community Agro-Vet Entrepreneurs (CAVE) and technical coordinators who have been trained by Heifer to provide medical services to the farmers. Devi is hopeful that with proper care and regular checkups by the CAVEs her livestock will be healthy soon and she will be able to sell them at profit.

"I might be able to save enough money to build a new house by the end of monsoon," Devi said. But until then she and her children will be living in the tin box they call home.