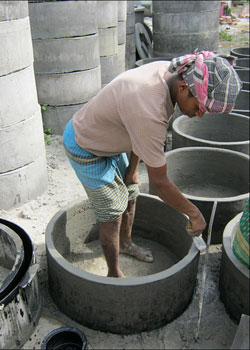 For members of Heifer's Building a Poverty Free and Equitable Society (BPES) project, August 22, 2012, will not soon be forgotten. They all looked proudly at the bricks, cement bags and other construction materials gathered in front of the Simulkandi branch office of Pally Bikash Kendra (PBK). PBK, a non-governmental organization (NGO), partners with Heifer in Bangladesh. The materials, which they made possible, would be used to build rings and slabs for sanitary pit latrines. Glimpses of delight, pride and perhaps a little disbelief were clearly seen in the attitudes and mannerisms of the women that day. They have come a long way since starting their self-help groups (SHGs) and are now working together to fight against poverty, utter negligence and other obstacles. These women are proving that they, too, can contribute to society. 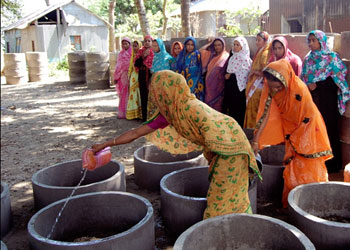 Every year, during monsoon season, Srinagar union, in Bangladesh's Bhairab upazila, or district, is inundated by the mighty Meghna River. Most of the cultivable land ends up under water, leaving residents without work. This causes acute poverty among the region's people. They struggle to manage three meals a day and lack awareness about health and hygiene. Flash flooding prevents permanent structures from being built in lowland areas, and the availability of higher ground is slim, as these areas are mostly owned by the wealthy. It is common for the poor to live in cramped spaces on high mounds where there is not enough room for proper homes, let alone latrines, so residents must rely on makeshift latrines, which have ill-effects on the health of the community.

Before joining the BPES project, the members were unaware of the negative impact of open defecation or makeshift latrines. When they received training on health and nutrition, they began to consider how their actions affect their families' health. They learned how unhygienic, open latrines spread disease and decided that taking measures to prevent disease is easier than trying to cure it.

So, members of the project management committee (PMC) met in May 2012 and determined that each SHG would contribute 5,000 takas, or about $64. With 10 groups, a total of 50,000 takas, or about $640, would be collected to build sanitary pit latrines. They used the money to hire an expert mason to construct rings and slabs, and they bought bricks, cement bags and sand. The PMC monitored the whole process, while other SHG members helped whenever they could. Initially, 30 sets of latrines were built and distributed among the members. The women said they would contribute more money to build additional latrines if the response is good. After all the members have pit latrines, they plan to build them throughout the community.

Indeed, these proud and happy women from a remote Bangladeshi village have much to celebrate.

You can help start a women's self-help group.