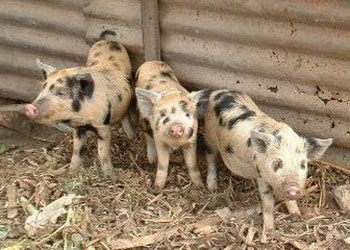 Nearly 220,500 pounds of pork was consumed worldwide in 2006. Since then, demand for pig products has continued to grow. In many countries, large-scale commercial piggeries are doing well. Heifer International is helping small-scale farmers in South Africa enjoy the same benefits.

Smallholder farmers feed their pigs with household food scraps that would otherwise go to waste, as well as scraps from vegetable gardens. For extra nutrition, farmers also feed pigs grains like corn, oats, barley and soybeans, as well as pellets, hay and bone meal.

Healthy pigs are productive pigs. Pigs have a lifespan of 10 to 15 years with a high reproductive rate. The duration of pregnancy for a pig is about four months. This means a single sow (female pig) can produce a litter of piglets twice a year. A sow produces, on average, 18 piglets at a time. As soon as they are weaned, these piglets can be sold.

A farmer who receives a sow from Heifer will pass on one female piglet from the first litter through Heifer's Passing on the Gift® and immediately begin earning income by selling the rest. Even if the first few litters produce less than the average, the farmer can still sell more than 15 piglets by the end of the first year–at an average of 500 South African Rand, or about $55, per piglet.

Farmers must also account for the cost of special housing for their pigs. Pigs have a low tolerance for high temperatures and can die from heat stress, so building an enclosure that keeps the animals cool is worth the extra cost.

Pig enclosures also decrease the risk of disease. Heifer encourages each farmer to keep a few pigs at their homestead or farm. This means that each family is responsible for just a few pigs, rather than all the pigs being kept in one place. Once the pigs produce piglets, project members can work together to access markets, as well as share ideas and information within the group.

Over 12 years, Heifer South Africa has helped several pig farmers become successful and independent. The Tsakani Piggery Project, located in Ribungwani village in Limpopo Province, was established in 2003 to ensure food security and sustainable livelihoods. Once participants were ready to be independent, Heifer exited the project. Years later, many of these farmers are still successful.

"After receiving two pigs from Heifer in 2003 I have managed to sell more than 40 pigs," Baloyi said. "The money from the sales has allowed me to purchase furniture and extend my home. Since I joined the project I always have income in my pocket to maintain my family."

Heifer South Africa works with many poor communities and helps farmers with a variety of animals. Pig farming may not be for everyone, but for some smallholder farmers it is proving to be an exciting and profitable business opportunity.

You can help farmer families around the world.