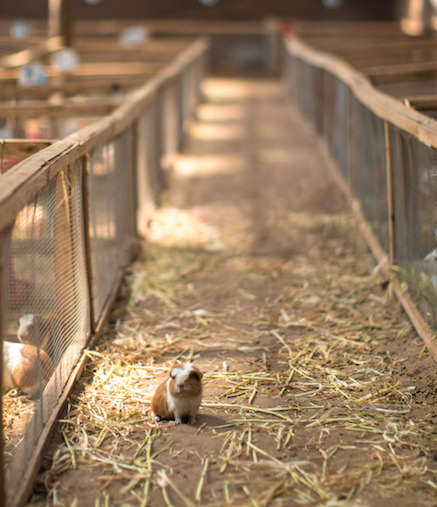 One tiny but brave soul volunteers for rat patrol duty for the betterment of the group. (Photo by Joe Tobiason)

We human beings can sometimes be a neurotic, anxious lot, but guinea pigs might give us a run for our money in that regard.

In Ccorca, Peru, Heifer is helping 600 families raise guinea pigs to improve their nutrition and quality of life. And it’s working. Since 2013, incidences of anemia in the district’s children have decreased from 85 percent to 25 percent. Child malnutrition has also gone down dramatically, from 76 percent to 36 percent.

Part of the reason for the success of Ccorca’s guinea pig ranchers is that families go to great lengths to nurture their apprehensive little animals through their anxieties. And, make no mistake, they have a lot of anxieties. But who doesn’t, right? No judgment here.

Without a care in the world ... except for strangers, loud noises, rats, the heat and potential future dietary changes. (Photo by Joe Tobiason)

Among other things, I’m told that the following will cause the average guinea pig to fret:

That seems like a fair list to me. In response, guinea pigs might pile into a corner of their pen, which is, of course, adorable. More seriously, constant anxiety can lead to health concerns or problematic pregnancies for the animals.

Luckily, our friends in Ccorca have a few tricks up their sleeves to combat the stressors of everyday guinea pig life. It’s important that the guinea pigs are kept on a strict schedule so they can get used to a routine. Petting sometimes eases a troubled guinea pig’s mind. Strangers are rarely let into the guinea pig barns. And the high-altitude Andean climate is ideal for raising the critters—it is where they come from, after all.

Many of the folks who raise guinea pigs go the extra mile and wake up at 4 a.m. to waft eucalyptus smoke over their animals, to soothe them and cure some of the ailments that life of worry might bring.

Most people in Ccorca also play music for their guinea pigs, to drown out strange noises and calm the animals down. When I asked Edgar Ccolque Quispe what kind of music his guinea pigs like, he said they like “a little bit of everything.”

On the set of this summer's hottest guinea horror film, Scatter. (Photo by Joe Tobiason)