Fashion is about taking risks, or at least that’s what red carpet commentators tell us. But the adorable trend of dressing chickens in handcrafted sweaters may be too great a risk to chickens’ health. That’s sad news for crafters of bespoke frocks aimed at protecting backyard birds from the cold. The chicken sweater controversy is tearing rifts in the yarn crafting and backyard chickening communities, and also raising larger questions about animal fashion in general. Do any animals truly need clothes? If so, which ones? Are we knitting too many tiny sweaters for animals? 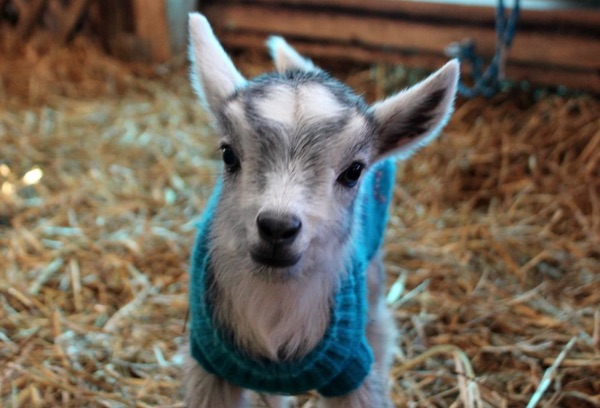 Kids born early in the season may need a sweater to help them weather the early springtime chill.

Lucky for you, we’ve delved into both the art- and science-related questions on the issue and can offer answers for both the crafters dying to whip up a tiny turtleneck and the farmers who don’t want to cook their birds prematurely. There are plenty of naked animals out there who need something to wear. The key is picking your perfect muse.

Sadly, your favorite backyard chicken might not be it. While proponents of chicken sweaters say their birds are more comfortable when dressed for the season, detractors say the sweaters could cause more problems than they solve. The well-meaning knitters and crocheters cranking out dashing capes and jumpers to protect poultry from winter chill may in fact be impeding chickens’ ability to regulate their body temperature naturally, which they do by fluffing their feathers. Even for molting birds with featherless patches, clothes can be problematic because they can damage nascent pin feathers. Even worse, those sweet little sweaters apparently make the perfect carrying case for hungry hawks looking for a grab-and-go chicken dinner. 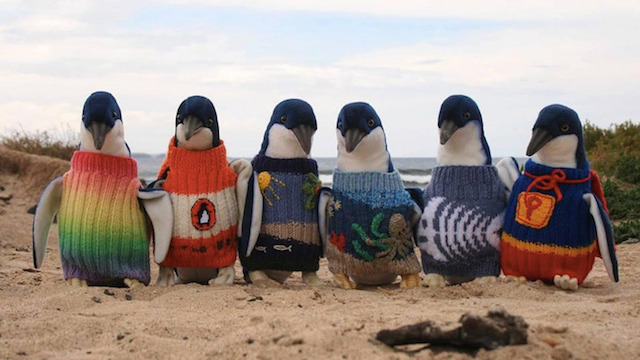 Penguins come well-dressed already, but a handknit sweater can be a lifesaver after an oil spill.

This news is quite a buzzkill in the knitting community, whose members are always eager to take up their needles to serve the greater good. A quick search on Ravelry, the all-in-one Facebook-Instagram-Reddit for yarn crafters, yields more than a dozen patterns for chicken sweaters, and Etsy is swimming with the finished product ready for purchase.

There ARE exceptions to the no-sweaters-for-chickens rule, especially for cage-laying hens who respond to their tight, stressful environment by pulling out their feathers. Upon retirement, these bald old birds need help staying warm and decent while their feathers grow in. Any bird with health problems might be a candidate for sweaters during their outdoor forays, although they should only wear sweaters for short periods of time and under supervision. And turkeys, with their pointy claws so prone to get caught up in the loose weave of knitted garments, much prefer something in fleece. 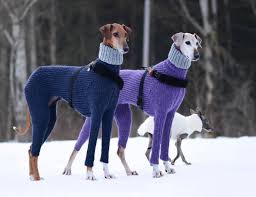 Don't worry if your dogs aren't Eurochic like this pair. They will still look great in a wooly crewneck.

Birds beyond the barnyard can sometimes benefit from handknits. Consider the already well-dressed penguin. While penguins are well adapted to handle the cold, they do sometimes need an extra layer, as happened after an oil spill along the southern coast of Australia in 2001. Wildlife throughout the area were coated in oil, putting their well-being at risk. Penguins who groom themselves and ingest the oil from their feathers can get sick. Dressing penguins in wooly sweaters prevents them from grooming themselves and keeps them healthy until rescuers can go in for a deep clean. Restraint garments never looked so good!

When Australian penguins got caught up in another oil spill in 2015, do-gooding knitters from around the globe pounced on the chance to outfit them. The response was so great that the Penguin Foundation cried uncle and announced they are no longer accepting donations, as they have a backlog of sweaters to last well into the future.

You might, however, find some animals in need closer to home. All dogs look great in coats, sweaters and boots, and some dogs actually NEED them. Cold tolerance varies from pet to pet, just as it does for people, according to the American Veterinary Medical Association. Consider your dog’s fur, body fat, activity level and general health when planning a canine winter wardrobe. A golden retriever retiree in Florida may need nothing but a fresh buzzcut to get him through a balmy winter, while a short-haired Chihuahua in Chicago may need a head-to-toe ensemble. Hairless cats have a hard time staying warm so they also make good candidates for handmade clothes, but they can be temperamental and picky. The good news is that it’s doubtful any cat, hairless or no, would ever complain about a stylish beret. 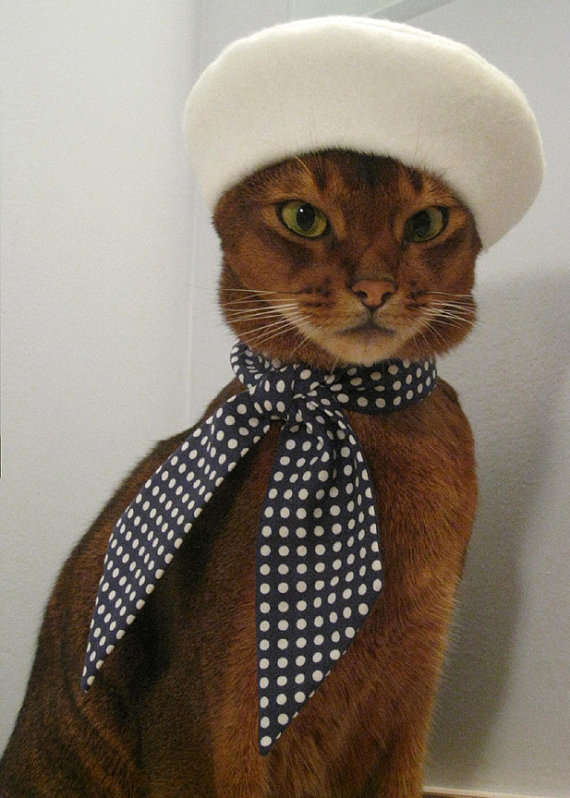 Life is a cat beret for the Etsy shopkeeper Cat Atelier, who designs high feline fashion.

Perhaps the biggest recent news in animal fashion came out of northern India in 2017, when a cold snap hit the Wildlife SOS Elephant Conservation and Care Center. Volunteers joined forces to knit and crochet giant, 1970s-worthy getups. Each garment took the team four weeks to complete, but the women making them took care to make every piece colorful and comfortable for their very special elephants. "It is important to keep our elephants protected from the bitter cold during this extreme winter, as they are weak and vulnerable having suffered so much abuse making them susceptible to ailments such as pneumonia," refuge cofounder Kartick Satyanarayan said in a news release after his elephants’ flashy duds started getting media attention. " The cold also aggravates their arthritis which is a common issue that our rescued elephants have to deal with." 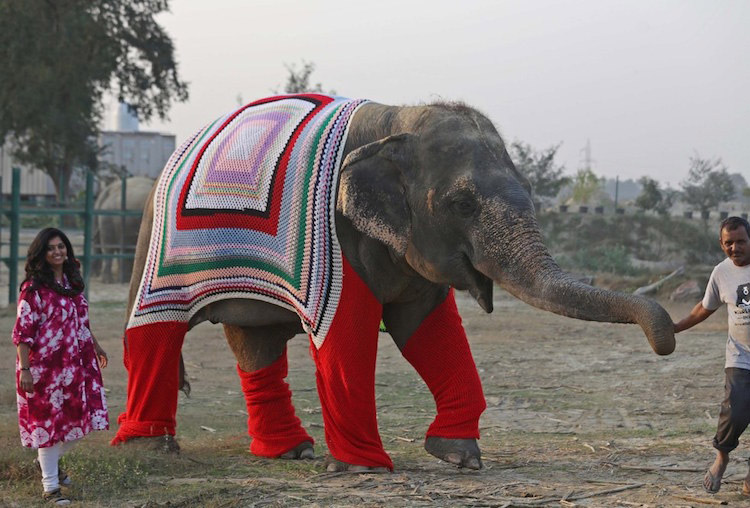 A cold snap in northern India in 2017 got these elephants hooked on crochet ensembles.

These elephants look amazing, no doubt, but do we need to start hoarding yarn for the biggest knit-along yet? Maybe not, according to Todd Montgomery, the education manager for The Elephant Sanctuary in Tennessee. The 110-acre sanctuary in Hohenwald offers a home to elephants retired from zoos and circuses. Heated barns with padded floors keep the elephants cozy when cold weather hits, although some of them don’t mind the chill. Minnie, for example, has been observed breaking ice on a pond to go for a swim.

Putting clothes on elephants could be a health risk, because the elephants are likely to fidget with the garments and potentially eat them, causing gastrointestinal distress, Montgomery said. And elephants are heartier than you might expect. “It’s important to keep in mind, the natural range of Asian elephants includes everything from the tropics to temperate forests to the Himalayan foothills,” he said. “African elephants also have a very diverse climatological range.” You can keep your eye on the Hohenwald herd to see how they’re weathering the winter on this elecam.