This year we’re celebrating Heifer International’s 75th year of working to end hunger and poverty and care for the Earth. As we look back over our history as an organization, we are proud that as we have matured into a world-class nonprofit, many world-class leaders have taken notice of our work, including several United States presidents and first ladies. Here is a short retrospective of what a few of these prestigious leaders have said about Heifer. 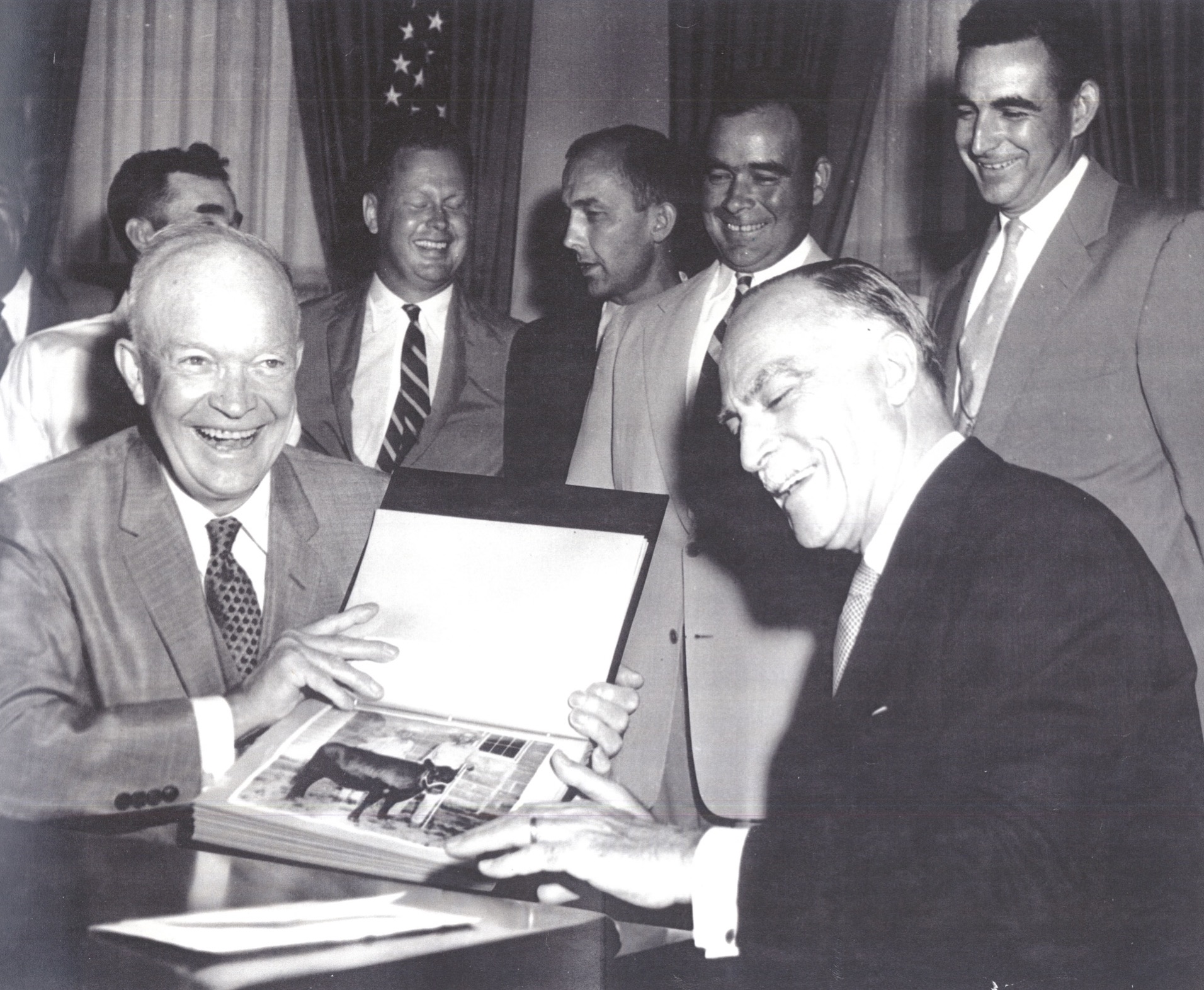 President Eisenhower donated several of his own prize Angus bulls to a Heifer project in Greece. He also donated a bull to Heifer’s relief project in Korea in 1972, the same year that First Lady Mamie Eisenhower joined Heifer Project International’s Advisory Council. At the time, Heifer’s International Advisory Council functioned as a liaison between the organization and prominent world citizens who endorsed Heifer’s work and wanted to lend their support. “It sounds like a fine project and I am pleased to lend my support,” said First Lady Eisenhower when she distinguished the Advisory Council with her membership.

The Clintons Reach Out

Heifer International came together on common ground with former President Clinton and the Clinton Foundation in Haiti in 2013, when Heifer Haiti’s REACH (Rural Entrepreneurs for Agricultural Cooperation in Haiti) project was in full swing following the devasting 2010 earthquake. The former president visited Haiti with a delegation of executives key to agricultural development in Haiti, including Heifer’s President and CEO Pierre Ferrari. In a wrap-up speech at the Port-au-Prince Heineken plant announcing that company's $40 million investment and commitment to local sourcing of sorghum for the brewery, Clinton thanked Ferrari and Heifer International by name, in addition to others in the delegation, for their contributions in Haiti.

One of the great debates that I hope to see favorably resolved while I'm still alive is whether the world population can go to 8 or 9 billion or wherever it's going, and we can deal with the challenges of climate change in a way that enhances and empowers smallholder farmers. President Bill Clinton

"This has been a great day," Clinton said in a press conference at the brewery. "One of the great debates that I hope to see favorably resolved while I'm still alive is whether the world population can go to 8 or 9 billion or wherever it's going, and we can deal with the challenges of climate change in a way that enhances and empowers smallholder farmers instead of throwing them off their lands with the pipe dream that large-scale mechanized farming can solve that problem.”

Former First Lady and Secretary of State Hillary Rodham Clinton granted us an interview in World Ark’s Holiday 2012 issue, discussing her lifelong work to improve the lives of women and children in Arkansas as Arkansas’s first lady and around the world as the nation’s top diplomat. Empowering women has always been one of Heifer’s nearest and dearest values, and Secretary Clinton voiced our feelings and experience when she said, “Women have shown time and again that they will seize opportunities to improve their own and their families’ lives. And even when it seems that no opportunity exists, they still find a way.”

The Bushes Visit the Bush

Former First Lady Laura Bush visited Zambia in 2012 and took the time to visit one of Heifer International's project sites there. She toured the Mpima milk processing center in Kabwe and got to meet some of the families working with Heifer there. Mrs. Bush said she is grateful for Heifer's work and "all the ways you help the people of Zambia." But the gratitude lies on our side: we were appreciative of the time Mrs. Bush took to learn more about our Zambia projects and learn about the needs of people there.

After her short visit to a Heifer project in Zambia, Mrs. Bush agreed to an interview in World Ark magazine, detailing her work as the chair of the George W. Bush Institute Women’s Initiative, focusing on a program aiming to unite and empower Egyptians at a critical time for women’s rights in their country. Heifer’s work has long recognized the profound power of community among women, so we couldn’t have agreed more when she said, “It’s important to have women’s voices at the table. A broad network empowers women and gives them more of a voice.”

C.J. Cregg is confused when Heifer International sends a goat for a photo op in season 4 of NBC's The West Wing

Even fictional presidents love Heifer. In episode 12, season 4 of The West Wing, NBC’s serial political drama of the early aughts, the unforgettable Press Secretary C.J. Cregg sets up a photo op for President Bartlett to promote Heifer International’s work. Confused when Heifer sends a goat instead of a cow, shenanigans ensue as various bemused characters encounter Heifer’s goat. While not too keen on the idea at first, the episode ends with President Bartlett and his senior staff doing the photo op in good humor for a good cause.