To be fair, cheese smells pretty awful and Americans happily put away an average of 35 pounds of it per person per year. So please know that I mean no offense, and in fact I applaud and envy the sophisticated and healthy cuisine of Vietnam. Pho is unfailingly delicious. Fresh fish and spring rolls and tropical fruit for dessert? I’m all in. 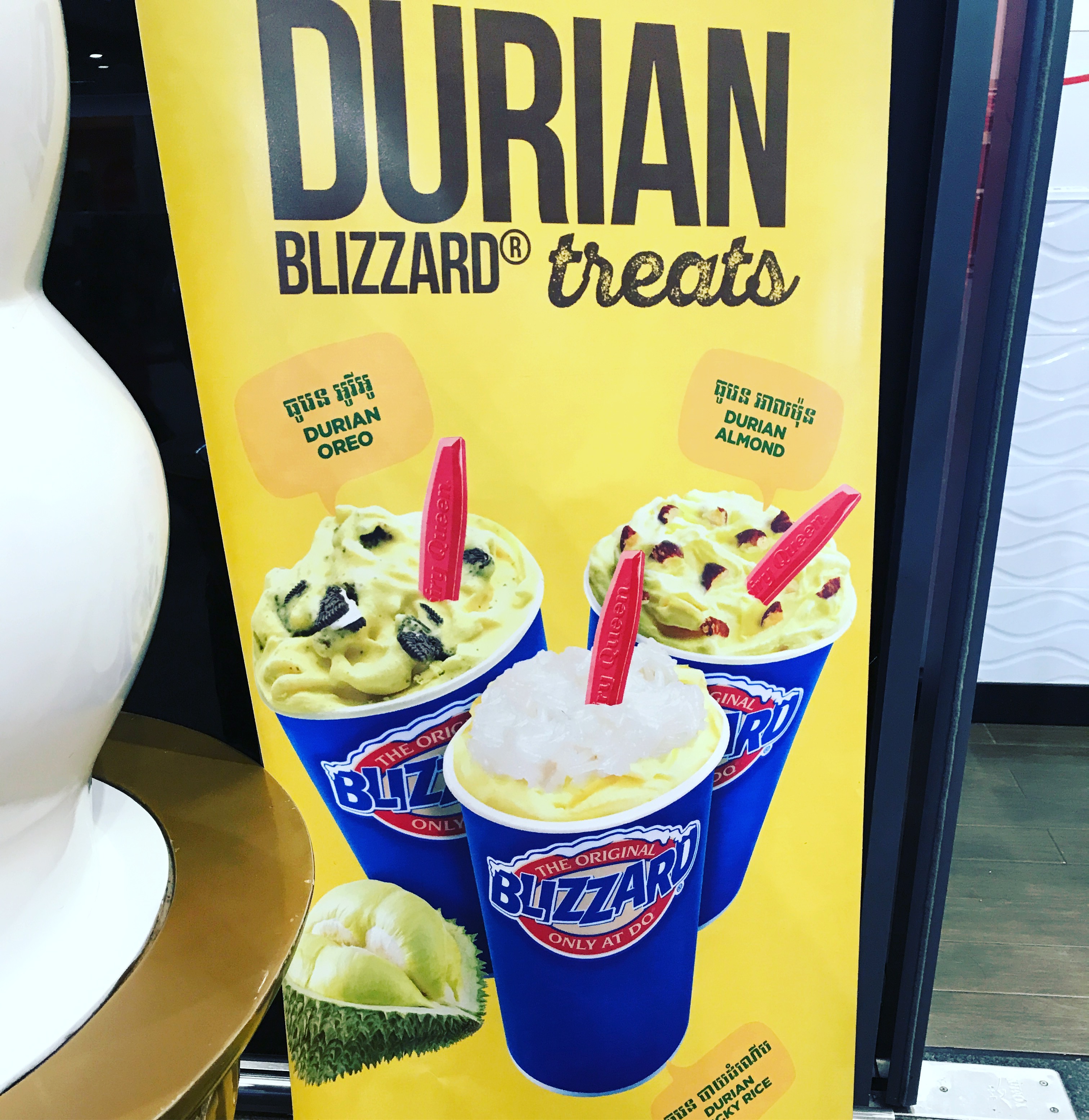 Durian flavoring is apparently a doorbuster at Cambodian Dairy Queens.

Most Americans have never heard of the delicacy that’s so popular and revered in Southeast Asia that it’s known there as “the king of fruits.” It’s certainly the most pungent. The smell is so distinctive, so pervasive and lingering, that durian is banned on public transportation in Singapore. In November 2018 an Indonesian plane hauling durian in the cargo hold was grounded when passengers refused to board because of the stench. Teams of scientists have devoted hours in the lab to figure out what biochemical compound cocktail gives durian its famous aroma.

Durian invites passion from both devotees and detractors. Famous foodie Anthony Bourdain was a fan, although he acknowledged durian had some drawbacks. “Your breath will smell as if you’d been French-kissing your dead grandmother.”

Upon arrival at the Phnom Pen airport in Cambodia this November, I figured out that if I ever wanted to sample this famous fruit, this trip would be my best chance. A Dairy Queen kiosk right outside baggage claim advertised durian-flavored Blizzards, with an option for Oreos, sticky rice or almonds mixed in. It seemed like cheating to cut the famous flavor with ice cream, though, so I waited. 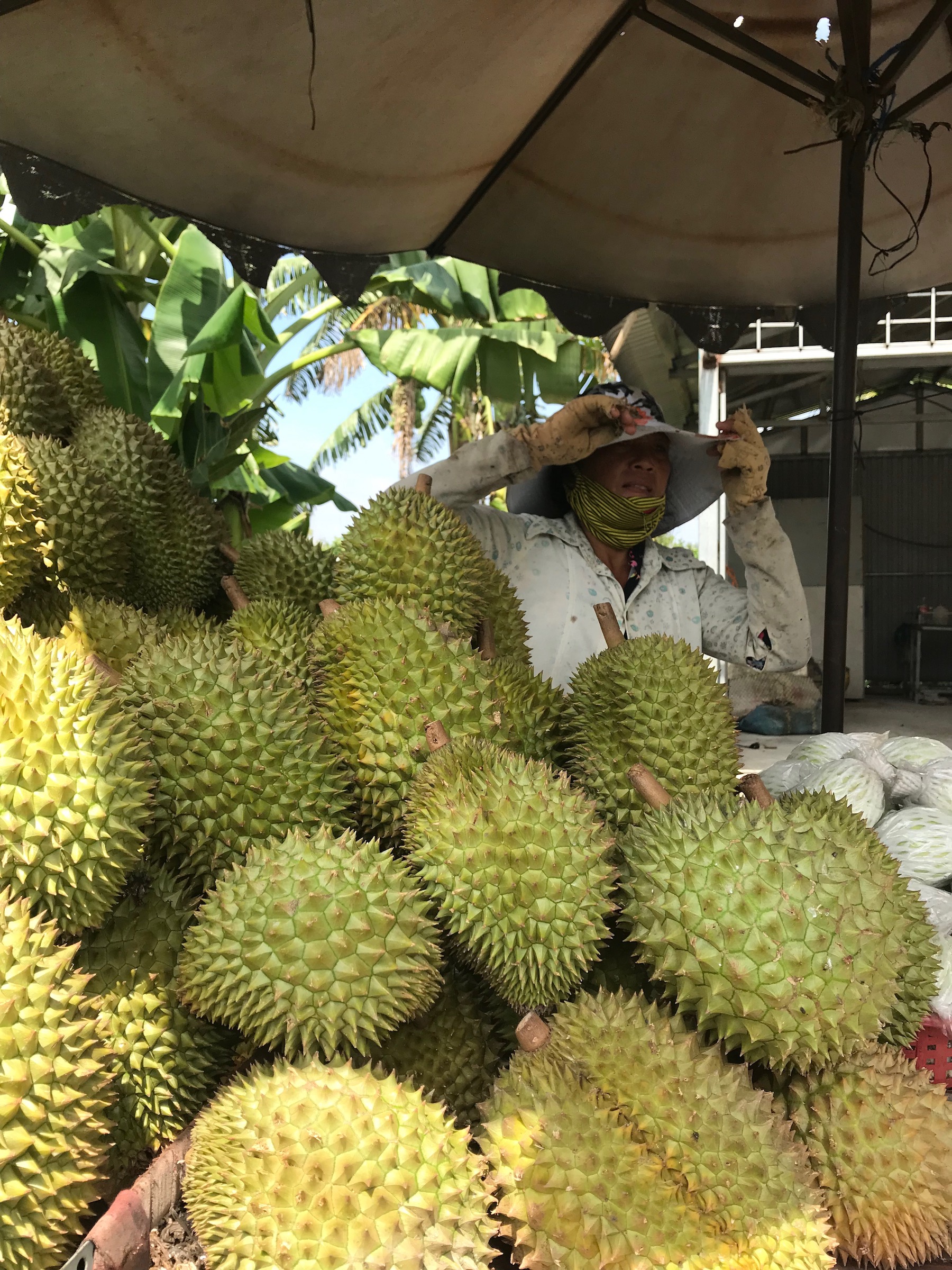 These football-sized fruits can be smelled a football field away.

My chance came a week later in Vietnam during a car ride from Ho Chi Minh City to Can Tho City in the country’s verdant, balmy South. High temperatures and humidity kept this tropical region lush and green, and roadside fruit stands were well supplied with mountains of spiky, oblong durian pods.

Friends had warned me that durian smells worse than it tastes, so I screwed up my courage as a fruit vendor sliced into two durians before finding one she deemed ripe enough. The smell was repellant, like rotten garbage soaked in fingernail polish remover, or a dumpster full of dead dogs on a hot day. The vendor chopped the durian in half then extricated the plump orange fruit that popped out cleanly from the pod. The texture of the fruit is custard-like, but with a smooth, dry skin. 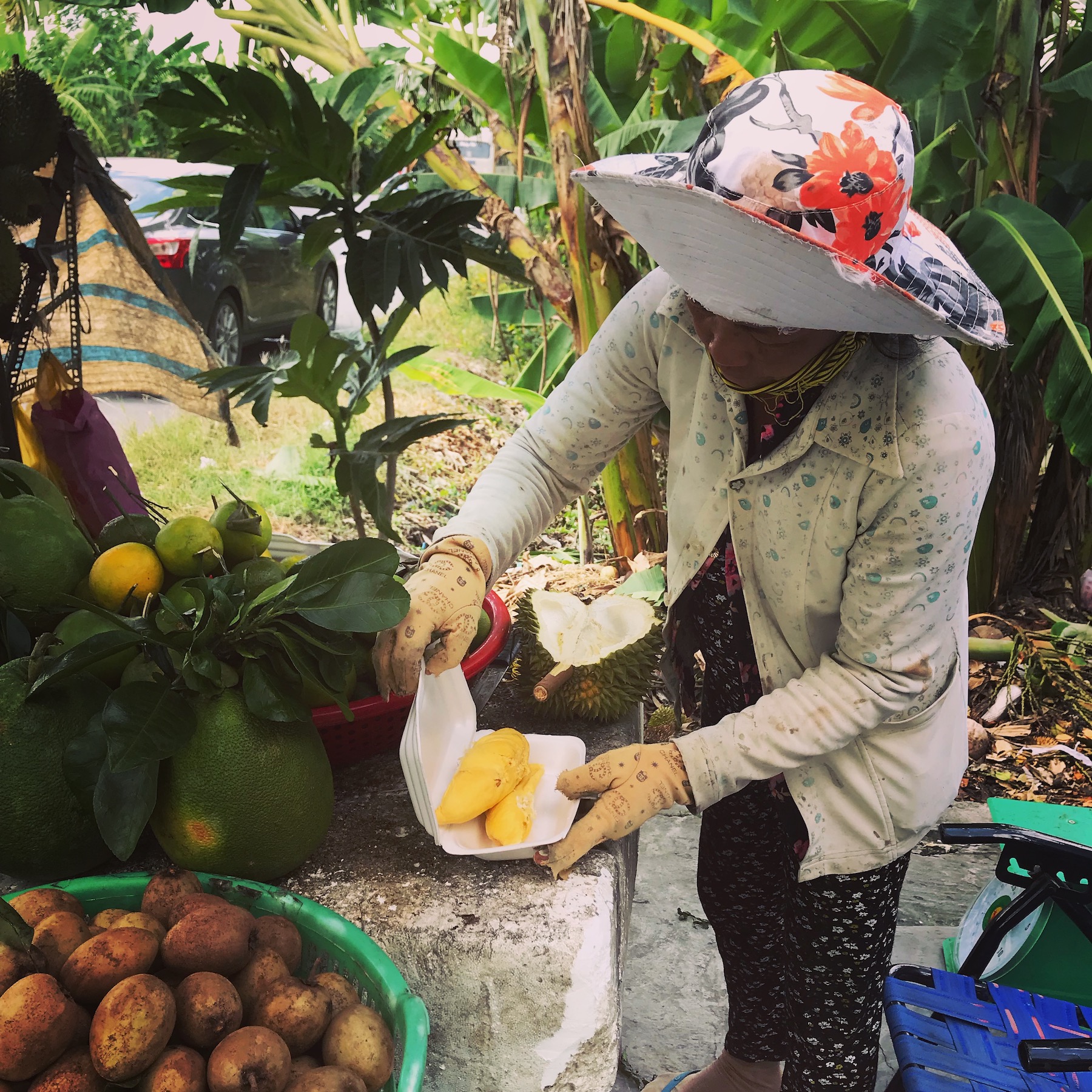 It takes skill to cleanly extricate the fruit from the pod.

Why does this fruit that’s so beloved in Vietnam, Thailand, China and Indonesia remind me (and many other westerners) of adolescent boys’ sweaty tennis shoes filled with expired coleslaw? The answer, apparently, lies in the different ways peoples’ brains interpret olfactory sensors. Apparently, the complex components that make up durian’s unique aroma are similar but not identical to noxious smells like sulfur and turpentine, so brains like mine lump durian into the do-not-eat category. Other brains, possibly more sophisticated or maybe just more practiced, interpret the aromas differently and find them pleasant and appealing.

A friend who lived in China for a year told me the trick is to keep eating durian. By the third taste, she said, you’re hooked. I never made it that far, but plenty have. Durian fan clubs abound on the web, and so do opportunities to tour fecund durian farms across Southeast Asia during harvest season. Do you have what it takes? A disclaimer written in bold warns that these special tours aren’t for everyone. “Prerequisite for travel: You must not dislike durian odor.”